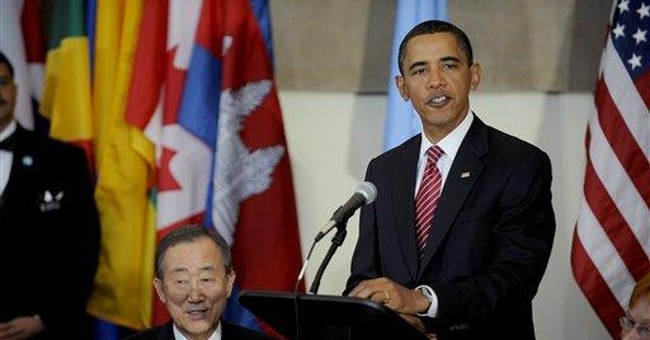 In 1996, Vice President Al Gore was named by President Bill Clinton to chair the White House Commission on Aviation Safety. Over the months that followed, he and an impressive list of commissioners -- including senior law enforcement and military officers, government officials and academics -- conducted "an intensive inquiry into civil aviation safety, security and air traffic control modernization." In early 1997, they issued a final report, including a set of recommendations which, Vice President Gore stated confidently, "will serve to enhance and ensure the continued safety and security of our air transportation system." I suspect you know where I'm heading. Despite such acts of terrorism as the 1993 World Trade Center attack, and despite Osama bin Laden's "Declaration of War" against the United States (published in August 1996, in Al Quds Al Arabi, a London-based newspaper), Gore's inquiry did not recognize that terrorism was more pressing than "air traffic control modernization" or the other issues under examination. Terrorism was covered in Chapter Three, titled "Improving Security for Travelers." It began with this quote from President Clinton: "We know we can't make the world risk-free, but we can reduce the risks we face and we have to take the fight to the terrorists."

Of course, there was to be none of that, not in any serious sense, over the next few years, the years leading up to 2001. As for the commissioners' specific recommendations, those included the "development of profiling programs," but they added that all passengers should be "subject to the same level of scrutiny," and that "no profile should contain or be based on" such criteria as "national origin" or "religious or gender characteristics."

In other words, had any airport officials on 9/11/01 been suspicious about Muslim men of Saudi or other Middle Eastern origin boarding passenger planes, and had they suggested subjecting those young men to additional scrutiny -- that would have been impermissible under the Gore commission guidelines.

Other recommendations focused on ways to prevent explosives being placed aboard planes, but there was nothing about using such commonplace implements as box-cutters, to take control of a plane, nothing about fully fueled passenger jets being turned into missiles to bring down skyscrapers.

What recommendations might have been implemented to hijackers with homicidal/suicidal intentions from successfully completing their missions? To name just a few: installing fortified and lockable cockpit doors; training pilots to conduct abrupt maneuvers - e.g. dives and rolls - to disable passengers disobeying orders to sit down and buckle their seatbelts; training and arming members of flight crews; and placing air marshals on planes. Such recommendations are - at least in retrospect - conspicuously absent.

I bring all this up not to criticize Al Gore, though it does seem remarkable that, following this experience, he has made a career - and tens of millions of dollars and a Nobel Peace Prize and an Academy Award -- contending that he has identified the most critical threat confronting us, and that it is not terrorism, asymmetric warfare and Islamist imperialism, but rather global warming.

Actually, the preferred phrase is now "global climate change" (perhaps because there is little evidence of temperatures climbing in recent years). The received wisdom is that such change is being caused by people in the developed nations, that this will lead to calamity, and that the solution is to drastically alter the Western lifestyle - diminishing our living standards while giving governments and trans-national organizations vastly increased power over us.

But my point here is not to question the conventional climate change narrative; it is rather to illustrate how difficult it can be to recognize which challenges are most urgent. Finding solutions - real solutions -- can be even harder.

So when it comes to determining how much missile defense is sufficient; the consequences should Iran's ruling mullahs acquire nuclear weapons; whether it is excessively risky to treat international terrorists as criminal suspects rather than illegal combatants; whether coercive interrogations should ever be permissible; what would result from abandoning the battle against the Taliban in Afghanistan; which reforms will improve, not damage, America's health care system; and, yes, whether "climate change" should be at the top of the international agenda, as it was this week at the United Nations "summit" in New York, we would be wise to exercise caution.

If, as has been said many times, war is too important to leave to the generals, some other issues are too important to leave to politicians and their favorite experts. In a democracy, responsible citizens, sensible people, ordinary people -- people such as you and I -- need to resist the temptation to trust elites to handle things for us. We need, instead, to do the arduous work of figuring things out for ourselves. We need to deliberate and decide these issues as if our lives depended on it. Because they do.