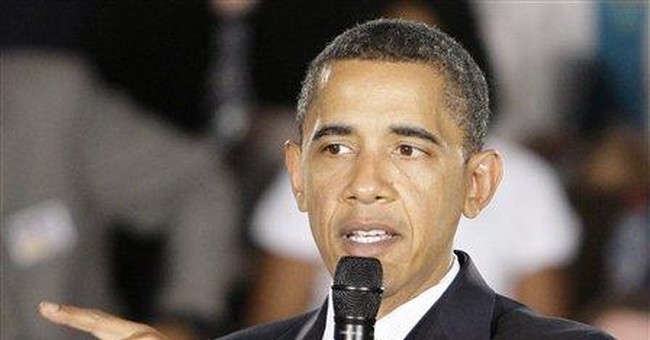 Punditry is easy. Policy is hard. OK, to be fair, writing articles and speeches that are powerful and persuasive is a demanding job. But crafting sound policy adds layers of complexity.

Example: President Kennedy pledged that Americans will "pay any price, bear any burden, meet any hardship, support any friend, oppose any foe to assure the survival and the success of liberty." Very inspiring. But try translating that into policies toward Iraq, Iran, Afghanistan, Pakistan, Lebanon, Russia, China, Venezuela and Burma. That's tough.

Policies can solve one problem and exacerbate others. An argument can be made for shutting down oil refineries in the U.S. to improve the environment. But if that makes Americans more dependent on foreign oil, our national security is weakened. If it leads to higher gasoline prices, that places an economic burden on businesses, their employees and their families. Speechwriters and editorialists can ignore such tradeoffs; policy makers do so at the nation's peril.

It is a fact, not a criticism, that President Barack Obama is a neophyte foreign policy maker. During his short but spectacularly successful political career he has given speeches about foreign policy - and powerful and persuasive have those speeches been. Not surprisingly, translating fine phrases into action has proven challenging.

Example: During last year's campaign, Obama told crowds: "I recall what John F. Kennedy once said. We should never negotiate out of fear, but we should never fear to negotiate." Indeed, we should not - but that begs the question: How do we negotiate with hostile and extremist regimes and reach beneficial outcomes? What do we offer? What do we threaten?

Just a few weeks ago, Obama's advisors could argue - plausibly if wrongly -- that Iran was relatively democratic, and that President Mahmoud Ahmadinejad and Supreme Leader Ali Khamenei enjoyed widespread popular support within Iran.

However, the blatantly fraudulent election results announced by the regime, the mass demonstrations that followed, and the regime's despotic response - scores killed, mass arrests, beatings, government goons "trashing entire streets and even neighborhoods," and dragging wounded protestors from their hospital beds -- reveals a reality very different from what those advisors had perceived.

Can anyone still believe it's possible to sweet talk Iran out of developing nuclear weapons and supporting terrorists beyond its borders? Can anyone seriously imagine lifting a glass of pomegranate juice and offering a toast to Ahmadinejad, Khamanei and the so-called Islamic Republic?

This brings us to the hard task of formulating an effective policy toward Iran based on what we understand about those in power there and America's vital interests. At this point, I'd argue that such a policy needs to include five key initiatives:

1) Express strong moral support for Iran's dissidents. Between those in Iran getting their heads cracked and those doing the cracking, there is no equivalence. America - a nation uniquely founded on principles and values -- should never be unclear about that.

2) Provide funds and communications assistance to the rebels, much as the U.S. did in support of Polish anti-communists in the early 1980s. Michael Ledeen, Freedom Scholar at the Foundation for Defense of Democracies (FDD), has been beating this drum for years.

3) Use diplomacy to persuade our European allies to recall their ambassadors from and suspend trade with Iran. Obama deputy David Axelrod said last weekend that the clerical regime's actions are isolating Iran "in every way from the community of nations." As of this moment, that's just wishful thinking.

4) Sharply increase the economic pressure on the regime by cutting off its gasoline imports. This can be accomplished through legislation now pending in Congress (and based on FDD research). In particular, the Iran Petroleum Sanctions Act would give the president the authority to impose sanctions on any entity that provides or helps Iran obtain refined petroleum, including suppliers, shippers, insurance and reinsurance companies as well as companies giving financial assistance. The bill is strongly backed by more than 60 Senators, ranging across the political spectrum -- Joe Lieberman, Jon Kyl, Evan Bayh, Russ Feingold, Chuck Schumer and Tom Coburn among them. A House version is co-sponsored by Howard Berman, chairman of the House Foreign Affairs Committee, and Ileana Ros-Lehtinen, the ranking Republican on that panel, and has over 200 co-sponsors.

They all agree on this: American taxpayers should not be supporting the Islamist regime in Tehran - as we have been in previous administrations and still are. They also agree that no responsible nation or corporation should be fueling vehicles that transport the Islamist regime's thugs to homes and hospitals in the middle of the night.

5) Fully fund and build a comprehensive missile defense system so Iran's rulers understand that the nuclear weapons and missiles they are developing are a waste of resources: The United States will have the means to prevent them from reaching their targets.

Such an approach would force the ruling mullahs to confront tough policy choices of their own. If this failed to change the regime's behavior -- or the regime itself -- harsher measures would be considered. But at that point, no one could say that a peaceful alternative had been ignored.

Iran becoming a nuclear-armed, state sponsor of terrorism, openly vowing "Death to America!" while meddling in Lebanon, Gaza, Latin America, Europe and Asia, and threatening genocide against Israelis: Obama can not want such change to take place on his watch.

By contrast, the successful use of "leveraged engagement," coupled with the administration's muscular policies in Afghanistan and Pakistan, would constitute nothing less than an Obama Doctrine -- neither Bush redux nor a return to "realism," the hoary theory that all nations act rationally and in pursuit of similar visions of self-interest.

Instead, as former National Security Advisor Robert "Bud" McFarlane recently - and perhaps hopefully - wrote, it would be: "a doctrine of effective realism, a doctrine that advances our own interests and those of democratic aspirants throughout the world."

Is that not the kind of policy-making for which Obama would like to be known? More important: Is this not what's best for the nation?