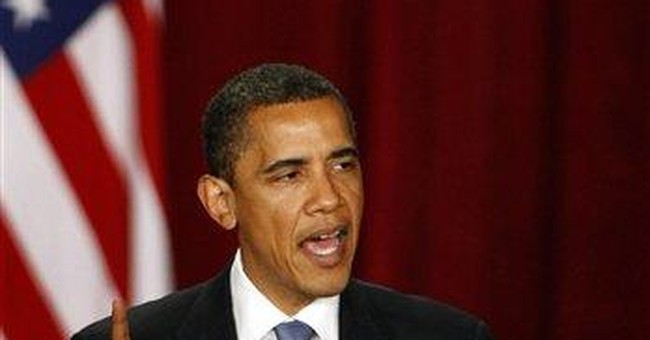 Ted Rall is hopping mad. The syndicated columnist and president of the Association of American Editorial Cartoonists is denouncing President Obama as "useless" and "dangerous," and he's demanding that Obama "step down now."

Long afflicted with Bush Derangement Syndrome, Rall has his knickers in a knot now because he thinks Obama has a plan for "preventive detentions." He claims to have seen "reports in U.S. state-controlled media" saying so. While these reports imply that "Obama's shocking new policy would only apply to Islamic terrorists," Rall is certain that, in practice, "Obama wants to let government goons snatch you, me and anyone else they deem annoying off the street."

If you read the entirety of Rall's column -- and I don't recommend that unless your initials are G.W.B. in which case it may brighten your day -- you will eventually realize that Rall is using "preventive detentions" interchangeably with "prolonged detentions" - a somewhat different concept in reality, if not in Rall's fevered brain.

But this does illustrate something interesting: When it comes to national security - the set of policies intended to protect Americans from their enemies -- Obama has so far not been the president that many of his fans on the left had hoped and many of his critics on the right had feared.

As the Council on Foreign Relations' Max Boot, Harvard's Jack Goldsmith and others have noted, Obama is not abandoning what has been achieved -- at great cost -- in Iraq. He is increasing the U.S. commitment in Afghanistan. He appears to appreciate the high stakes in Pakistan. Now as in the Bush administration, Generals David Petraeus and Ray Odierno are commanding American troops in battle under the leadership of Secretary of Defense Robert Gates.

Also consistent with the previous administration, Obama has retained such anti-terrorism tools as military commissions (with cosmetic modifications), renditions (begun during the Clinton era), and, yes, indefinite detentions of captured enemy combatants (to keep them from returning to the conflict -- standard practice during war time, now as in the past).

While still a senator running for president, Obama broke with House Speaker Nancy Pelosi and voted to restore to our intelligence agencies the authority to eavesdrop aggressively on terrorist suspects abroad. The Patriot Act - which tore down the wall separating the intelligence and law enforcement communities -- has not been repealed.

The President now opposes the release of additional prisoner abuse photos, though he could do so more effectively by issuing an executive order, as former terrorism prosecutor Andrew McCarthy has noted.

So does all this make Obama a national security centrist? Are Vice President Dick Cheney and other national security hawks wrong when they warn that Obama is putting chinks in the armor America has worn since 9/11/01? Not necessarily.

The decision to close Guantanamo Bay without a viable plan for the combatants detained there was -- it now seems obvious -- a mistake. True, Gitmo has been a public relations nightmare, conflated in much of the media with the notorious Abu Ghraib. But dangerous terrorists are housed at Guantanamo. As former Justice Department attorney David Rivkin has pointed out, it could be both risky and unlawful to place these individuals in stateside prisons alongside ordinary convicted criminals.

Also: What might have been a serious debate over interrogation techniques has been mismanaged. Instead of balancing the need for intelligence on terrorist operations with the desire to respect civil liberties even in the most extreme cases, an attempt has been made to criminalize past policy decisions and demonize those who made them. Meanwhile, al-Qaeda operatives now sleep more soundly, secure in the knowledge that should they be captured, the worst that will happen is that some CIA agent of Satan will attempt to establish a "trusting" relationship with them.

Finally, it is becoming apparent that Obama's diplomatic "surge" to stop the nuclear weapons and missile development programs of Iran and North Korea is proving unproductive. Despite that, Obama is not yet pressing Congress to give him the tools he will need to squeeze Iran's rulers by cutting off their gasoline supplies -- the most promising of possible economic sanctions.

And the Obama administration is still asking Congress to reduce spending on comprehensive missile defense -- the only non-nuclear, non-violent and entirely defensive means available to render enemy missiles harmless and worthless.

The "Global War on Terror" is what the Bush administration called the conflict to which Americans - Ted Rall and his fellow travelers excepted -- belatedly awoke on September 11, 2001. It is an imprecise phrase: Terrorism is a weapon. Terror is the anticipated response to the use of this weapon. And both words beg the key question: Who is using terrorism to instill terror - and to what ends?

But the terms used by the new administration are worse. We're fighting "overseas contingency operations" to prevent "man-created disasters"? This is the kind of slovenly language that, as George Orwell once observed, "makes it easier for us to have foolish thoughts."

And foolish thoughts lead to foolish policies. Obama's national security experience is thin. The advice he is receiving is almost certainly conflicting. If he does what is necessary to protect American lives, he will be attacked by Ted Rall and others who think only in cartoons. But if he does not, Americans will be inadequately defended. Obama is smart enough to understand what that would mean for him and for the nation he was chosen to lead.