Claudia Thomas
|
Posted: Apr 07, 2017 12:01 AM
Share   Tweet
The opinions expressed by columnists are their own and do not necessarily represent the views of Townhall.com. 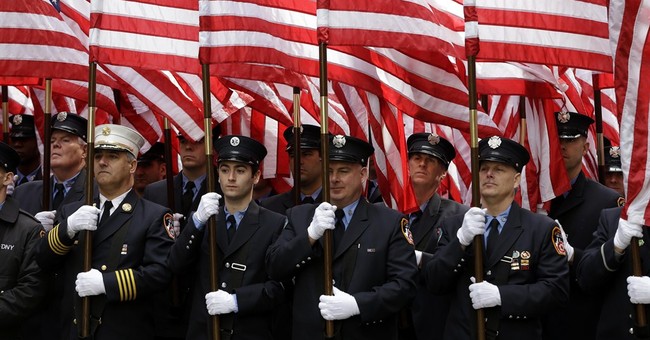 The formal Fire Department of New York (FDNY) was founded July 31, 1865. On Riverside Drive resides a memorial honoring all of New York’s fallen firefighters. Dedicated in 1913, it lists no individual names carved into its marble; rather it serves as a simple and elegant place of remembrance for those in the hearts, minds and history of those that visit this sacred place. Separately, at its Brooklyn Headquarters, is an FDNY Memorial honoring those who have died in the line of duty since the inception of the FDNY in 1865. Near to it, yet still separate, another plaque is all too rapidly filling with the names of those members who have passed of post-9/11 diseases related to the toxins they were exposed to at the World Trade Center. The numbers increase with every passing week, and some would have the two memorials conjoined as one.

In 2010, then Fire Commissioner Salvatore Cassano, announced a single wall plaque would be installed at Headquarters to honor those who died of post-9/11 deaths. His announcement even then was greeted with controversy. At the time, the Uniformed Firefighters Officers Association (UFOA) said it was a positive step, while the union’s Uniformed Firefighters Association (UFA), Steve Cassidy, complained saying the union wanted a memorial, not a plaque, calling it ‘unacceptable’.

Pre 1865, the firefighters who died in the line of duty, or of injuries sustained thereof, and in many cases, after months of illness and infirmity, are most all long forgotten. Those of us who had ancestors who served on those early departments and bucket brigades, or who perished in those early conflagrations, such as the one at 231 Broadway (W. T. Jennings establishment), in 1854, where 10 Firefighters died, and another 22 were injured, are remembered only by the family historians who record the historic accounts, or an old newspaper account, or perhaps a headstone, many of which have long been recaptured by the earth that eventually we return to.

Fact is, many of those people behind the etched names and dates on the FDNY Memorial Plaque dating back to 1865 have also been long forgotten but by those who are family or otherwise historians. Those who died on 9/11, and those who died post-9/11, will also succumb to fading memories by the very nature of history moving forward, and years skirting by.

As a family historian, a 9/11 Rescue and Recovery Worker and Advocate, I understand the importance of recording not just names and dates but, the character and meaning behind the ‘dash’ people lived. While on a wall, we are but date of birth-dash-date of death, and a corresponding name; however, to family, and to history, it is the full story that only is fully realized and told.

I will be cremated and my ashes scattered – it’s not for everyone but, it is my personal wish. There will be no plaque, no place on a wall, as I wasn’t with the FDNY or the NYPD, or served as a Firefighter, or Law Enforcement whose names may be placed on some larger State or National Memorial. Fifty years from now, my grandchildren will remember me by the written family history or scant newspaper articles, or Townhall commentaries I write to give some insight of, not only who their Grandmother was during her dash on earth, but from the dedication to record the history of their ancestors and their respective stories. One hundred years from now, no one will know my name, but for the family historian who goes searching for information to secure the same respect for ancestry that I strive towards or come upon one of the aforementioned articles. Nope, no headstone, no memorial wall and I’m okay with that – in fact, it is my express desire that where my story is recorded, is in the scant stories I write, and the legacy I leave behind in ways that can never be etched into marble or granite but into hearts.

Fact is, there are many memorials that are disgracefully filled with errors of misspellings and worse; another fact, once you start listing names, someone is surely left out, forgotten, never known about, or not suiting of criteria pertinent to that particular monument. Years ago I started a Roll of Honor & Remembrance which now has well over 2200 names of those that served at all three attack sites, who served or survived, and have passed since, regardless of cause of death. I know, without hesitation, that it too is not all encompassing, because we will never know the names of all who served, survived, and have passed since. It will be recorded perhaps on a respectable kiosk somewhere someday, and for certain, in the hearts, memories and family trees of each person both listed, and not listed within it. A few organizations have created memorials/plaques pertinent to their own personnel, as has the FDNY and NYPD, etc., and how they distinguish and set criteria will ever be a burden and subject of controversy, which can only be settled by them.

We all want to be remembered, and there will always be controversy on the best way to do that, but speaking as a historian, it’s about much more than names and dates, it’s about who a person was. Having the names of those who died post-9/11 separate, actually, in my humble opinion, gives them a very special distinction of who they were, for the names and dates and being on their own plaque, tell their specific stories which are indeed different from those who died at a specific incident, on a specific date. They are no less ‘line of duty’ deaths, they are however, different in their long suffering, and there should be no infighting over how they are remembered. Sadly, all too many don’t know the astronomical losses we’ve experienced since the attacks. From my research and Roll of Honor & Remembrance, 1900+ have died from related illnesses - they were either survivors covered in dust, or rescue and recovery responders who spent days, weeks and months being exposed to toxins that eventually brought them to give the ultimate sacrifice. They were not FDNY and NYPD alone, they were Port Authority Police Officers and non-sworn civilians, Red Cross, Salvation Army and other volunteers, they were hardhat construction workers and military who came to help secure our perimeters. They were all individuals, each with a story, and each story worth remembering.