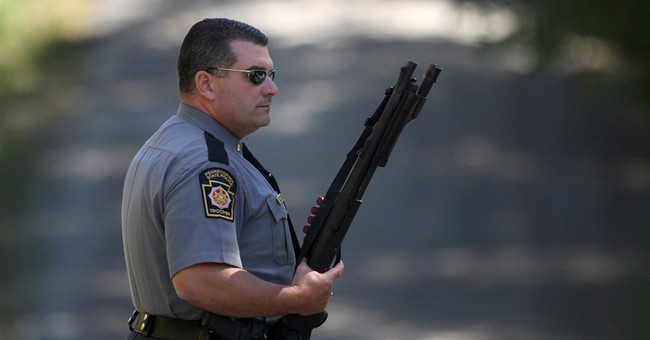 Trending
While many in the nation, from Oakland to New York, rally in protest over the deaths of Michael Brown and Eric Garner, I keep wondering: What about the good cops? As with our military personnel, we are often quick to hang the allegedly corrupt but slow to honor those who serve honestly to protect.

According to the nonprofit National Law Enforcement Officers Memorial Fund, there are more than 900,000 of them who are serving in the United States; about 12 percent are women.

The FBI reported that there were 404 incidents of "justifiable homicide" by American police in 2011. That is a high number, especially when compared with other countries. As Business Insider reported, "by comparison, just six people were killed by police in Australia over the same period. Police in England and Wales killed only two people, and German police killed six."

First, it's important to note what our uniformed guardians of good are really up against. According to the NLEOMF, in the U.S.:

--"According to the FBI's Uniform Crime Reports, an estimated 1.2 million violent crimes occurred nationwide in 2011."

--"On average, over the last decade, there have been 58,261 assaults against law enforcement each year, resulting in 15,658 injuries."

--"Since the first recorded police death in 1791, there have been over 20,000 law enforcement officers killed in the line of duty."

--"The deadliest day in law enforcement history was September 11, 2001, when 72 officers were killed while responding to the terrorist attacks on America."

In fact, while citizens have been rallying in Ferguson, Missouri, and New York, in just the past month, a dozen cops have been killed across our country by murderous thugs or unfortunate accidents in the line of duty.

Let me put some flesh to these statistics. Here are the recently fallen in just the month of November, according to the NLEOMF:

--Officer Ernest Montoya, Navajo Division of Public Safety. Montoya suffered a fatal heart attack while transporting a prisoner, whom he had just arrested. Montoya was the fourth law enforcement fatality in Arizona in 2014. He is survived by his wife and five children.

--Agent Edwin Roman-Acevedo, San Juan (Puerto Rico) Police Department. Roman-Acevedo was shot and killed while attempting to stop an armed robbery while off duty. He is survived by his wife and one child.

--Deputy Sheriff Bart Hart, Elmore County (Alabama) Sheriff's Office. Hart was on duty and had just left the scene of an accident involving a deer, when he was struck by another car and killed. He is survived by his wife and daughter.

--Deputy Sheriff Christopher Smith, Leon County (Florida) Sheriff's Office. Smith was shot and killed in an ambush while responding to a house fire. He leaves behind his wife and two children.

--Sgt. Alex Martinez, Willacy County (Texas) Sheriff's Office. Martinez was killed in a single-vehicle crash. He was the 11th law enforcement fatality in Texas this year.

--Sgt. Jeffrey Greene, Union County (North Carolina) Sheriff's Office. Greene's patrol car was stopped in a turn lane, when a tractor-trailer rolled over onto it. Green is survived by his wife, two daughters and five grandchildren.

--Officer Justin Winebrenner, Akron (Ohio) Police Department. Winebrenner was shot and killed while confronting an armed suspect, who was causing a disturbance in a crowded tavern near closing time. He is survived by his 4-year-old daughter.

--Investigator Holmes Smith, Clarendon County (South Carolina) Sheriff's Office. Smith, a 19-year law enforcement veteran, ran off the road and died after a meeting about a car theft case. He leaves behind a wife and five children.

--Deputy Sheriff Darrell Perritt, Maury County (Tennessee) Sheriff's Department. Perritt was killed in a single-vehicle crash while responding to help another deputy involved in a pursuit of a DUI suspect. He leaves behind his wife and three kids.

--Deputy Sheriff Matthew Chism, Cedar County (Missouri) Sheriff's Office. Chism was shot and killed after a vehicle chase and foot pursuit. He leaves behind his wife and small child.

--Constable Robert White, El Paso County (Texas) Constable's Office, Precinct 1. White was fatally injured while struggling with a suspect during a security detail. He is survived by his wife and four children.

I'm not telling anyone not to protest. That's your constitutional right and freedom of speech at work. What I am saying is that if you're going to speak up against one cop whom you believe to be corrupt, then at least extend a hand of gratitude to another who's doing his or her job well.

This hits a little close to home because I am very pro-law enforcement and have many friends who are amazing officers. I am even an honorary Texas Ranger. I also married a cop! My wife, Gena, is a former correctional corporal and reserve deputy sheriff in her hometown in Northern California.

The truth is that most of the time across the country, injuries occur between cops and civilians not because cops have a power problem but because civilians are breaking the law. If they obeyed the laws of the land or paused to respect the badge a little bit more, the injuries to both civilians and law enforcement would be minuscule.

Apropos are the words of our savior -- whose birth we celebrate this month -- reminding us of the sacrifice he and many of our law enforcement officers have made: "Greater love has no one than this: that one lay down his life for another."

Gena and I wish everyone in law enforcement a very merry and safe Christmas as we salute the red, white and true blue!