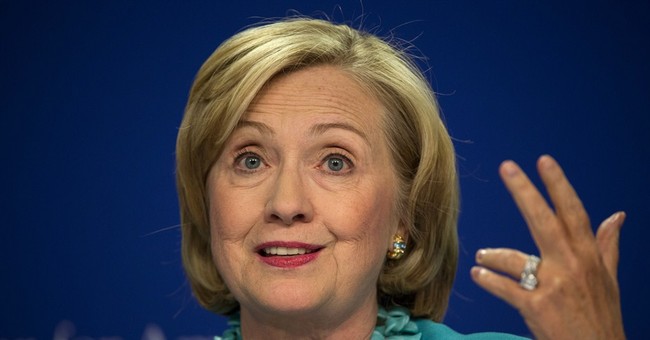 Last week, Hillary Clinton returned to Iowa for the first time since her 2008 presidential campaign loss, saying, "I'm back." She continued: "It's true. I've been thinking about it," referring to another run in 2016. But the truth is that even many of her esteemed liberal cronies think it's a bad idea.

I know that billionaire buddies such as Wal-Mart heiress Alice Walton, philanthropist Jon Stryker and progressive globalist George Soros were among 32 other wealthy elites who helped the former first lady raise over $4 million last year for the "Ready for Hillary" super PAC. However, outside of her super-rich comrades -- who have clear self-invested interests in resurrecting and ensuring a Clinton dynasty -- hosts of other liberals are petrified of the prospect of her becoming president.

Most expect us conservatives to oppose the 2016 presidential campaign of Hillary Clinton, but listen to the liberals themselves. They've already done our bidding.

Let me give you 10 -- among many other -- liberal cases against Clinton, in their own words, including one from Clinton herself.

10) "It's possible, even likely, that by 2016 the electorate will be restive, and ready for more change than a pillar of the Obama administration could provide. ... Progressives might think it's time to run a national campaign from the left, particularly on issues of national security. And it might indeed be time for a challenge to the bipartisan national security consensus that's hardened since 9/11, as exemplified by the centrist-liberal crowd that feted Clinton at the Saban forum. It would be hard for that campaign to be Hillary Clinton's. ... I do think people have valid reservations about the nepotism and inbreeding of our political elite. ... Like it or not, Clinton is inextricably tied to Obama's presidency. If he stumbles ... her candidacy will be wounded if not doomed." -- Joan Walsh, former editor-in-chief of Salon.com and presently an MSNBC and CNN political analyst, writing for Salon.com

9) "You can't be the candidate that shakes down more money on Wall Street than anybody since, I don't know, Woodrow Wilson, and be the populist. You can't be the one to say we're going to focus on rebuilding America if you voted to go to the Iraq War. There were 30-some Democrats who voted against that. ... Are we going to choose more leadership that is going to roll over and get scratched on the belly by corporations like a fat dog?" -- Brian Schweitzer, former Democratic governor of Montana (2005-13), to Time magazine

8) "(Clinton) cannot simply ignore the controversies and wage an energetic defense, a full embrace of America's international record at a time when (Barack) Obama is scoring the lowest poll numbers of his presidency on that issue. Obama's foreign policy looks like a key vulnerability for Democrats in the next presidential election. ... Clinton did not get everything right. Her failure to list Nigeria's Boko Haram as a terrorist organization, for example, was a mistake. And to the extent that she did play a role in Obama's foreign policy, she cannot completely disassociate herself from his failures." -- world affairs columnist Frida Ghitis, writing for CNN

7) "The first real hand-hold that the president had in climbing out of single digits in the Democratic primaries in 2008 is that he had condemned the Iraq War and Hillary Clinton had voted for it. It was the first real difference between the president, and most of the rest of the field. For me, I could be wrong, but I still think a vote for that war still should be a deal-breaker in Democratic primaries. Some mistakes you can't walk back." -- Charles Pierce, lead political blogger for Esquire

6) "We cannot have the party go back to the center. And we can't have Rand Paul talking about Ferguson and race and not Hillary Clinton, when she is the senator from the state where the (Eric Garner) chokehold case was. ... This is now a national, central issue, and anyone running for president needs to come up with a formula, or in my opinion, they forfeit their right to be taken seriously. ... I'm amazed that we are not hearing from leading candidates -- Chris Christie or Jeb Bush or Hillary Clinton." -- Al Sharpton, civil rights activist

5) "Many liberal and progressive activists don't trust Clinton because they think she sides with big banks and big money instead of the middle class and they're wary of her on national security. ... Possibly the biggest concern among liberals is Clinton's coziness with Wall Street, their big bogeyman. Since leaving the State Department in 2013, she has spoken at events sponsored by Wall Street giants like Fidelity, Goldman Sachs and Ameriprise Financial, and during her Senate runs and 2008 presidential run, Clinton defended lobbyists." -- "Why many liberals don't trust Hillary Clinton," by Dan Merica for CNN

4) "I don't think she has been aggressive on the banks. When I think of Hillary Clinton, I actually think she is in bed with some of the banks and Wall Street is her ally." -- Nelini Stamp, a progressive political organizer from New York

3) "If there was an actual, authentic 'I am going to listen to you about your issues' from Clinton, instead of kind of pounding the drum of inevitability and stampeding over the left on her way to assumed victory, that would be effective. ... You wonder if it is a pivot or whether she is saying what the moment demands." -- Sally Kohn, a progressive activist and CNN contributor

2) "(Clinton) basically seems to be taking positions that are very similar to the vision of America's role in the world that (in 2008) Democrats rejected." -- Michael Cohen, a fellow at The Century Foundation and a former speechwriter for several Democratic politicians

1) "I have to admit that a good deal of what my husband and I have learned (about Islam) has come from my daughter. (As) some of you who are our friends know, she took a course last year in Islamic history." -- Hillary Clinton, addressing members of the American Muslim Council at the first White House celebration of Eid al-Fitr, on Feb. 20, 1996