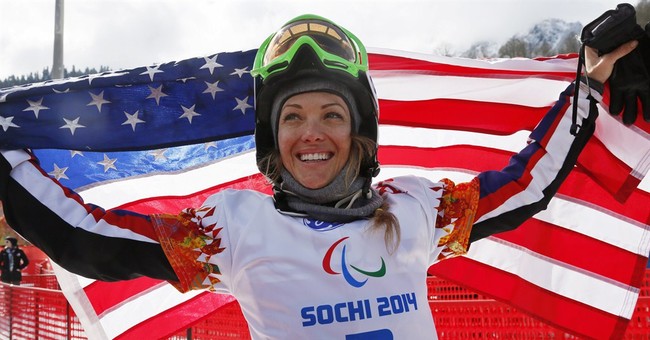 At 15 years of age, Amy Purdy took up snowboarding and quickly advanced in the sport she came to love and master.

At 19, Amy contracted meningococcal meningitis. She had less than a 2 percent chance of living.

Amy miraculously survived, but not without the life-altering loss of her spleen, her kidneys, the hearing in her left ear and both of her legs below the knee because of the ravage of the disease upon her circulatory system.

But against all the odds, Amy learned not only to walk again but also to snowboard. In fact, she became a world champion! Last Friday, at the age of 34, Amy won a bronze medal in the Paralympics, and she wants to share with us her secrets for success and overcoming life's greatest obstacles.

How'd she do it? A lot of willpower, a lot of determination, perseverance and, according to Amy, "essentially customizing off-the-shelf prosthetic components to try to get them to move the way we need them to for snowboarding."

As anyone can imagine, getting up on a snowboard with prosthetic legs -- let alone mastering the sport -- is a herculean feat. But Amy was up for the challenge -- one that would confront her deepest barriers of human potential and bring unexpected and repeated challenges.

Compensating for the loss of limbs would be difficult in most typical life practices, but hers also entailed scaling the mountains of Olympic competition. Amy explained: "Being a double leg amputee, I burn up to 60 percent more calories than the average person. We're using different muscles and compensating. I have to eat a lot, and to be honest, it's really difficult."

Even coming into the few years before the 2014 Paralympics, Amy's successes didn't come easy. According to the United States Olympic Committee's website, she didn't medal in two consecutive World Cup races on her home course at Colorado's Copper Mountain. However, she did go on to win a silver and a bronze at the next World Cup, which was at Canada's Big White. Prior to the Paralympics in Sochi, Russia, Amy was ranked second in the world, behind her teammate and national champion Heidi Jo Duce.

There's no doubt that Amy's life, optimism and gusto speak to a great degree for all Paralympic competitors and champions, including Steve Cash, Josh Pauls and Taylor Chace in sled hockey; Lt. Cmdr. Dan Cnossen, Oksana Masters and Andy Soule in Nordic skiing; Patrick McDonald in wheelchair curling; Alana Nichols, Danelle Umstead, Stephani Victor and Tyler Walker in Alpine skiing; and Evan Strong and Mike Shea in snowboarding. Even if they hadn't won medals, these inspiring souls would be heroes because of the obstacles they've overcome in life and the model they've set for us all.

Amy has one big final bit of wisdom, particularly for those of us who face what seem to be insurmountable life obstacles. She said: "We all have challenges. You can let them be obstacles or roadblocks, or you can use them. We've all seen that every challenge we've gone through, we've learned something from. It's not getting hung up on the challenges but figuring out how to get ahead. I wouldn't be where I am if I didn't take my situation and run with it. I have two prosthetic legs; this is my life. What am I going to do with it? And it's put me on this amazing journey. I can look back and be completely grateful and say I would never want to change anything. My hopes would be that other people recognize that we all have challenges. From the outside looking in, it might look easy, but people relate to vulnerability and to seeing someone who has had challenges and has overcome."

We certainly do, Amy. We certainly do. And your stellar attitude and example remind us all again that life is not about waiting for the storms to pass but about learning how to dance in the rain.

Speaking of dancing, on Monday night, Amy actually appeared as a dance contestant on the popular television show "Dancing With the Stars."

For more information about Amy Purdy, go to her website, at http://amypurdy.com, or watch her nine-minute inspirational speech, "Living beyond limits," at https://www.ted.com/talks/amy_purdy_living_beyond_limits.