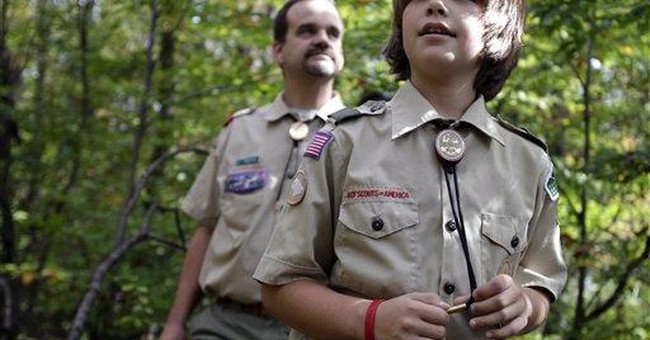 In parts 1 and 2, I discussed a series of evidences regarding how President Barack Obama is leading the White House pack in distancing his administration from the Boy Scouts of America via delaying Eagle Scout certificate signings, denying the invitation to go to the BSA's 100th anniversary gala, downplaying his acceptance of BSA's honorary presidency, dodging official White House communications about the BSA, not defending the BSA against cultural attacks, and, hence, devaluing his all-around role as BSA's honorary president.

U.S. presidents have been proudly accepting and fulfilling the post of honorary president of the BSA since President William Howard Taft in 1910. Let me document some of that presidential advocacy, as recorded on the official BSA website.

Although Theodore Roosevelt (president from 1901-09) was no longer president of the United States when the BSA was founded in 1910, he was an ardent supporter of the organization. He was a troop committeeman of Troop 39 in Oyster Bay, N.Y., first council commissioner of Nassau County Council and the first and only man designated as "Chief Scout Citizen."

In 1910, President William Howard Taft agreed to be honorary president of the Boy Scouts of America to "thus sustain a similar relation to the movement as does King George V to a similar movement in England."

On June 15, 1916, President Woodrow Wilson signed a bill that was passed unanimously by both houses of Congress, granting federal incorporation to the BSA.

President Warren G. Harding gave out "Harding Awards" to 5,058 Scout troops in 1923 for increasing their membership. He wrote to them, "I am with the Scout movement heart and soul."

President Calvin Coolidge's (1923-29) two sons were Scouts, and he was an involved father with them.

President Herbert Hoover (1929-33) "launched a forward movement and development program for the Boy Scouts of America at a dinner commemorating Scouting's 20th anniversary."

Franklin D. Roosevelt (1933-45) was an active Scout leader before becoming president. He was BSA president of the Greater New York Council. When FDR died in 1945, he had a 24-year record of service in Scouting.

President Harry S. Truman (1945-53) was also an ardent supporter of the BSA. He even traveled to Valley Forge, Pa., during his presidency to open the second National Scout Jamboree.

President Dwight D. Eisenhower (1953-61) was another avid supporter of the BSA. His support began when his son became a Scout. In 1948, he became a member of the National Executive Board of the BSA.

President Lyndon B. Johnson (1963-69) was an active Scout leader with the Capitol Area Council in Austin, Texas, and was a member of the National Capital Area Council from 1959-63. In 1963, he helped organize Post 1200 in Washington, D.C., which was chartered by the House of Representatives for pageboys working in Congress.

President Jimmy Carter (1977-81) was also an avid supporter of the BSA, having been a scoutmaster, troop committee chairman and Explorer adviser.

Before becoming president, Ronald Reagan (1981-89), then governor of California, became involved with the BSA on the Golden Empire Council. He was chairman of Project SOAR (Save Our American Resources) and served as membership roundup chairman and on the council's advisory board.

President George W. Bush (2001-09) was also a former Cub Scout and praised the BSA when he spoke to the nearly 40,000 Scouts, volunteers and leaders at the 2005 National Scout Jamboree at Fort A.P. Hill.

All that the BSA website can say about President Barack Obama is that he "received the BSA's (SET ITAL) 2008 Report to the Nation (END ITAL) from a group of young people representing all the Scouts of America. In recognition of the president's favorite sport, the report's delegation also gave him a BSA basketball that each of them had signed."

In this historical survey, do you see any U.S. presidential differences in support and advocacy of the BSA?

Mr. President, it's time to come out of hiding from the shadows of the White House, to quit playing duck-and-dodge with BSA's support, and to publicly stand up for and defend this amazing organization.

There's still time to redeem your flailing honorary presidency of the BSA. And you can start by attending the National Scout Jamboree from July 26-Aug. 4 at the 76,000-acre facility of Fort A.P. Hill, nestled in the rolling green hills of Virginia, conveniently close to our nation's capital and your home.

Mr. President, I'm certain the BSA's National Council and local leadership will cater to your schedule so you can attend the NSJ at any time over its 10-day celebration, if even for a single hour. And I'm doubly certain that the prospective 43,000 Scouts and leaders attending there would love to hear from you as they've heard from past presidents. And all of us would be eager to hear what you would say to them, especially me.