Is America Returning to a Pre-9/11 Mentality? 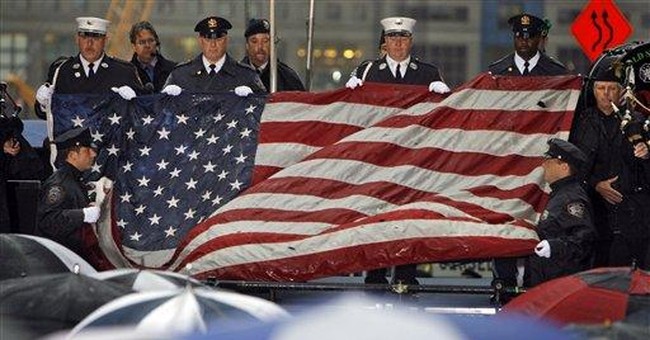 For better or worse, we have new Washington leadership and a new direction for America.

It's a softer and relational Washington, with whom international bonds are more important than national borders and boundaries. It's a more secular Washington, which says that the country is no longer a "Christian nation." It's a more liberal Washington; it has enacted more left-leaning legislation in its first year than any previous administration. It's a more generous Washington, from whom handouts, bailouts and borrowing are granted and given at record-breaking political speed.

But my greatest concern, I must confess, is that it's a kinder and gentler Washington, to whom the global war on terror has turned into an "overseas contingency operation." That kinder and gentler Washington begs the question, "Are we returning to a pre-9/11 mentality?" Pondering the answer prompts a pre-9/11 memory in which I fought that form of complacency via one of my television movies.

In 2000, I had starred in a CBS movie of the week, called "The President's Man," which garnered high ratings for the network. I played Joshua McCord, the president's secret agent who masquerades as a university professor between assignments. Two years later, the network wanted another film with me playing the same character.

During the time I was trying to come up with a story idea for the movie, my wife, Gena, and I had dinner in Dallas with our friends, one being a senator from Texas.

I asked the senator what she thought was the greatest threat to America. "Terrorism," she replied straightforwardly. "Our greatest fear is someone like Osama bin Laden sneaking a nuclear weapon into our country." She explained that we had allowed our nation to become vulnerable to such an attack. "During the last eight years, under President Clinton's administration, our security measures and enforcement personnel have been drastically reduced," she said. "That concerns me."

It concerned me, too, and I thought that I might be able to shed some light on the problem. After dinner, I called my brother, Aaron, and told him to get our scriptwriters to my house first thing in the morning. "I think I have the storyline for 'The President's Man,'" I told him.

The story we developed involved a bin Laden-type terrorist who contacts the president of the United States and threatens to escalate terrorism all over the world unless his holy warriors, incarcerated for their involvement in the 1993 World Trade Center bombing, are released. Of course, the president refuses to give in to his demands.

In our story, a nuclear weapon is indeed sneaked into the United States. The president is threatened and told that the nuclear weapon will be detonated if the holy warriors are not released.

That's when I come into the picture, as the president's main man. I sneak into Afghanistan, where the lead terrorist is hiding out. I kidnap him and bring him back to the United States for trial.

That would be coincidental enough, but it's even more so considering the timing of the movie's release and the rest of the story!

Interestingly, my conversation with the senator took place nine months before Sept. 11, 2001. I had finished my last episode of "Walker, Texas Ranger" in April of that year and then plunged right into working on the sequel to "The President's Man" in May. As we made the film, we thought we were creating a fictitious story; we shuddered at the possibility that something catastrophic would happen in our country.

As eerie as the juxtaposition of that script and that tragic event was, that was only a television movie. What our nation experienced was real-life. And the grief of those who still suffer from the loss of loved ones on 9/11 is still more real than life itself. May God continue to comfort them.

Of course, questioning God's concern when tragedy happens is a normal human reaction and understandable passage of grief (just as I did when my brother Wieland was killed, in 1970 in the Vietnam War). I learned back then that it's OK to doubt the Almighty, but staying there is definitely a dead end. If you feel stuck in your personal pain, I encourage you to read my friend and best-selling author Randy Alcorn's brand-new book, "If God Is Good," a genuinely encouraging read that embraces struggle and offers real answers that help. (You can learn more about the book, read an excerpt and order a copy here.)

Like many of you, I pray every day that nothing like 9/11 ever will happen again. But only if we are prepared and our country seeks God in genuine prayer will we prevail and possibly prevent another such tragedy.

Mostly, for the sake of those who still bear the grief of that disastrous day eight years ago, I hope the present Democratic majority in Washington doesn't drop its guard on the global war on terror. Otherwise, someday my television movie tragically may have a prophetic consequence.