Dirty Secret No. 3 in Obamacare 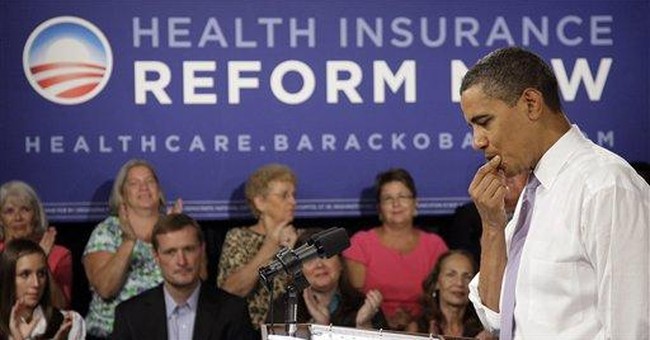 Ever heard the saying "absence of evidence is not evidence of absence"? That's true for any of the 1,000-plus-page versions of Obamacare.

I've informed you in previous columns of two dirty secrets in Obamacare. Dirty secret No. 3 is the sin of omission. It's what the health care bill doesn't say that will bite you in the end.

In 1,000-plus pages, there's surprisingly sparse coverage or complete avoidance of a host of necessary issues. I would cite pages in the bill, as I've done in my other articles, but there aren't any covering them. These are questions that need specific answers by the Obama administration, as well as by each of our representatives:

--What would the child development methods and values used in training parents during home visitations be? --To whom or what would the national committee that would oversee the entire health care system be accountable?

--What would the extents of power and limitations or boundaries of the national committee be?

--Would the national and regional health care committees eventually run with the power of the Federal Reserve System, as Dr. Ezekiel Emanuel, the health care adviser to the Obama administration, proposes in his book "Healthcare, Guaranteed"?

--Would Medicare be "phased out," as Emanuel proposes in his book?

--Would Medicaid be "phased out," as Emanuel proposes in his book?

--Would employee-provided health insurance eventually cease, as Emanuel proposes in his book?

--Specifically, how would the nation provide and pay for the additional medical and administrative personnel needed to cover roughly 50 million more people?

--Specifically, how would the nation provide and pay for the additional medical facilities and equipment needed to equip the new medical and administrative personnel?

--What are the specific cost projections for such extensive and extra medical personnel, practices, offices and equipment?

--What about the maldistribution of physicians?

--What about tort reform?

--What about class action suits?

--Would illegal immigrants be covered under this program?

--What about the specifics of abortion services? Would taxpayer funds finance them?

--What types and limitations of end-of-life counsel would be offered?

--Any guarantees that the middle class wouldn't be paying for Obamacare eventually?

--Have you investigated or read any other options for or alternatives to health care reform besides the most recent version of Obamacare? If not, why? If so, what are the pros and cons of each?

--Most importantly, will you write or sign amendments that guarantee the restrictions or explanations of the above points into law before passing any form of Obamacare?

Now read that list more slowly one more time, and ask yourself this: Is it a complete coincidence that all those specifics aren't mentioned already in Obamacare legislation? Do you want your representative to sign off on a bill that doesn't specify them? (Would you sign a contract to buy a car that didn't discuss financing or even the specifics of the car you were buying?)

Isn't this just the same ol' doubletalk and dirty politics we've seen in Washington? Whatever happened to Obama's campaign promises about the "most sweeping ethics reform" and "unprecedented transparency"? Why doesn't Washington start telling us the whole truth and nothing but the truth so help them God?

Obama promises that the middle class would not pay for the program, yet the proposed Obamacare legislation would shift progressive onus (beginning on Page 846) for aspects of ongoing health care onto state and local communities -- which, in turn, would pay for those services how? It doesn't say. And if a state were not to meet the criteria to be eligible for federal reimbursement, do we assume the federal government would write it all off, or would we the taxpayers foot that bill, too? It doesn't say. Generalities such as "the State share of the cost" (Page 847) should cause your pocketbook to tremble.

So here's what the specific implementation plan of Obamacare comes down to: "Trust government." A friend of mine who is a California Highway Patrol officer says, "In God we trust; all others we search." And that includes government.

Before so-called universal health care turns into universal hell care, write or call your representative today and protest his rushing to vote Obamacare into law. Remind him that what is needed in Washington is a truly bipartisan group that is allowed an ample amount of time to work on a compromise health care law that would rein in out-of-control insurance companies and wouldn't raise taxes (for anyone), regulate personal medical choices, ration health care or restrict American citizens' freedoms in any way.

Watch your back, America! As the adage goes, absence of evidence is not evidence of absence.