Are We Reaping What We've Sown? 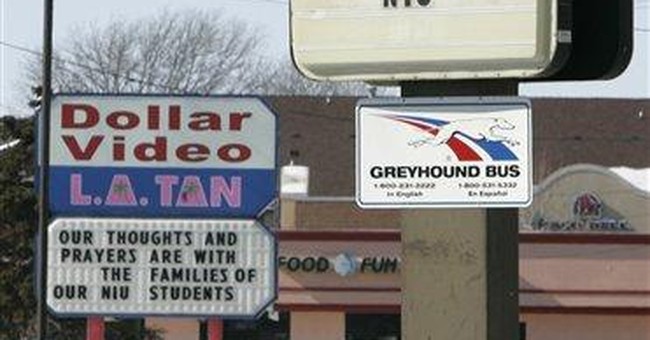 On February 14, 1929, five members of the North Side Irish/German gang led by George "Bugs" Moran were shot and killed in Chicago, Illinois, by four members of Al "Scarface" Capone's South Side Italian gang. On February 14, 2008, five students at Northern Illinois University were senselessly killed in DeKalb, Illinois, when a former graduate and gunman dressed in a black trench coat walked into a lecture hall and opened fire with a shotgun and two handguns. In all, I've counted at least 14 different shootings at colleges or universities since 2000, resulting in approximately 60 fatalities and dozens more wounded.

And the question we're all once again asking is, "Why?" Why the escalation of murderous rampages upon our collegiate settings? What will stop the brutal butchering of our youth on campuses across the nation? What will give solace and security to students and parents sending their children away to schools, when they are potential shooting playgrounds? Will we continue to fight to reverse these appalling trends or simply surrender this social crisis to Congress? Will we allow another human hunting to headline tomorrow's news?

While we absolutely need to implement further campus securities to reduce the number of violent incidents (like the 10 mentioned at SecurityInfoWatch.com), we must equally address the deeper needs of individuals and society in order to eliminate these acts of evil from ever breaching the borders of another campus. We need to understand what creates, contributes to or exacerbates these heinous crimes and eliminate those negative infusions.

A decade ago, GOP presidential candidate Mike Huckabee wrote the book "Kids Who Kill," which examines and seeks remedies for school shootings. In it he points to modern day factors that contribute to a culture of killing. Among them are a devaluing and disregard for human life; a greater parental disconnection from and immoral license with their children; a fascination with antiheroes or gangsters that breeds cynicism and selfishness; a false sense of self-worth or a perceived incapability of obtaining status, notoriety or contentment; a thirst for adrenaline and extremes to acquire attention, as well as pushing the envelope of rebellion, chaos and brutality; the impersonalizing of society through such devices as the Internet and frequent transient shifts in employment, living localities and friendships; the legislation of subversive morality; an abandonment of a fellowship and moral center of community like a church; and a complete disregard for moral absolutes.

When asked what a president can do, Mike Huckabee posited amidst his condolences for the victims of the NIU shootings, "I think a president ought to just encourage this country to once again get back to their own moral center."

Once upon a time, churches served as moral centers of a community. Of course, not any longer. And as Theodore Roosevelt once said, "In this actual world, a churchless community, a community where men have abandoned and scoffed at, or ignored their Christian duties, is a community on the rapid downgrade." Our founders concurred.

Of all the dispositions and habits which lead to political prosperity, religion and morality are indispensable supports. In vain would that man claim the tribute of patriotism, who should labor to subvert these great pillars of human happiness, these firmest props of the duties of men and citizens. The mere politician, equally with the pious man, ought to respect and to cherish them. A volume could not trace all their connections with private and public felicity. Let it simply be asked: Where is the security for property, for reputation, for life, if the sense of religious obligation deserts the oaths which are the instruments of investigation in courts of justice? And let us with caution indulge the supposition that morality can be maintained without religion. Whatever may be conceded to the influence of refined education on minds of peculiar structure, reason and experience both forbid us to expect that national morality can prevail in exclusion of religious principle.

Do we now believe we can consider morality and religion optional, without suffering civil and societal repercussions, despite the warning of our Founding Fathers, such as John Adams, "Our Constitution was made for only a moral and religious people. It is wholly inadequate to the government of any other"?

If Psalm 33:12 says, "Blessed is the nation whose God is the Lord," then what will be the state of blessedness for the nation that abandons God and his moral code of conduct?