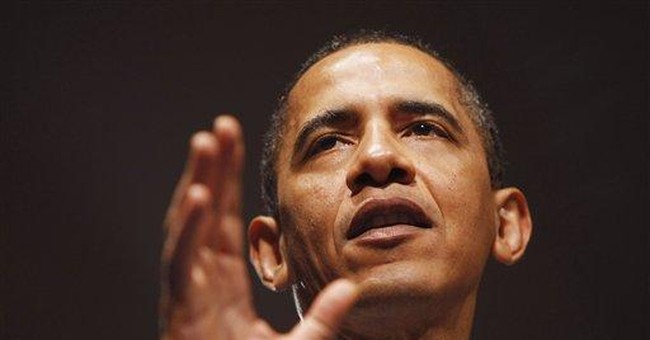 In the first three months since President Obama was sworn in as the 44th President of the United States, he and his Democrat colleagues in Congress have engaged in the largest power grab in our nation’s history, all to the tune of about a $13 trillion deficit. The $13 trillion price tag does not seem to even worry Obama and the Democrats. According to Obama, he has a plan to reduce the deficit a tad over the next few years. So as far as Obama is concerned, it’s okay to explode the deficit because he plans to reduce it a bit. What we are not being told is that the Obama/Democrat deficit explosion will certainly shrink our nation’s economy and cause massive inflation.

The Congressional Budget Office (CBO) recently ran the numbers and found that Obama’s projections of economic growth over the next ten years were highly inflated. Obama’s projections greatly overstated the growth that can occur under his tax-and-spend policies by a whopping $2.3 trillion. In fact, the CBO found that over the next ten years the federal government would need to find at least $800 billion just to begin paying for the debt created by the Obama/Democrat policies. Care to guess how he will attempt to pay for all that debt? If you guessed tax increases, you are correct. These tax increases will come from every direction and be as punitive as can be. We know this because Obama and the Democrat Congress are already finding creative ways to tax Americans. For instance, Obama has called for the removal of tax deductions for charitable giving. If this is allowed to occur, many Americans will either reduce their charitable giving or no longer donate to charity.

It will be the poor and the downtrodden that will suffer when charitable giving dries up.

During the 2008 campaign Obama talked a lot about his idea to award a $3,000 per job tax credit for businesses that hire employees. That idea went out the window almost immediately after he became President. Consider Obama’s cap-and-trade proposal, which will raise energy costs for American families by thousands of dollars per year. Obama and the Democrats proposed to offset this new tax in their budget with tax credits. Yet, the tax credits were never included in the Obama/Democrat budget. It gets even worse. Obama has actually called for the reduction of mortgage deductions for homeowners. At a time when home prices have fallen and the equity many Americans had in their homes has dried up -- thanks in large part to Democrat sponsored home lending policies -- Obama now wants to reduce the tax deduction on those homes.

Obama also spoke of a plan to remove capital gains taxes for small businesses during the 2008 campaign. A look at Obama’s own budget shows that the removal of capital gains taxes for business owners will not take effect until 2014. That is a full five years away. This is hardly going to help business owners today. So why did Obama and the Democrat Congress even add a tax reduction that is five years away to their budget? Because a tax reduction that is five years away can easily be removed between now and the time it goes into effect.

Then there is the Obama "Making Work Pay" tax credit. It was part of the stimulus bill that passed in Congress but it ends in just two years. Did Obama ever say this tax credit was going to expire in two years during the campaign? Of course not. Hiding behind all the spin and rhetoric, the Obama administration has used deceptive tactics to hide the exploding deficits and economic trouble his policies will bring our nation.

A few weeks ago, the non-partisan Capitol Hill publication, The Hill, published an article called, “Obama’s tax reckoning.” In that article, The Hill writers stated, “The Obama administration will be hard-pressed to avoid raising taxes on the middle class, according to economists crunching federal budget numbers in the lead-up to tax return day -- today, April 15.” So even the middle class will see tax hikes under Obama and the Democrat Congress. This should come as no surprise. Bill Clinton promised to raise taxes only on the rich, but raised taxes on the middle class as well. It is all part of the rouse. The Hill article went on to say, “President Obama’s proposed changes to the tax code, combined with exploding entitlement costs, will lead to ever-growing debt, according to independent estimates. The big question for Obama and his economic team will be whether he can meet the rising costs with increased tax revenue only from small slices of the electorate.”

The Hill article showed that even supporters of Obama are confirming that tax rates will rise on the middle class: “Many economists, including some who voted for Obama, do not believe that he can indefinitely avoid imposing tax increases much further down the income scale -- on the middle class.” Again, The Hill article stated, “You just simply can’t tax the rich enough to make this all up,” said Martin A. Sullivan, a former economic aide in the Reagan administration who said he backed Obama last fall. The article continued, “Especially just for getting the budget to a sustainable level, there needs to be a broad-based tax increase,” said Sullivan, now a contributing editor at Tax Analysts publications. “If you want to do healthcare on top of that, almost certainly, it just makes [a middle-class tax increase] all the more certain.”

It is becoming perfectly clear to see that Obama and the Democrat Congress have engaged in so much taxing and spending so they can in turn engage in more taxing and spending down the road. This is the same bait and switch routine I warned of in my article with Townhall on October 29, 2008, “A Progressive Bait and Switch.” So now what do we do? What course of action must we take from here? Well, we must be willing to accept that in the next few years ahead we will see an economic downturn not seen since the Great Depression. We must weather the storm of “The Coming Economic Tsunami.”

If this sounds like a rush to judgment based on hysteria, think again. Obama and the Democrat Congress’ policies will certainly force our nation to pay our international obligations in gold instead of paper dollars. This means hyperinflation is inevitable. Oil and energy prices will soar. This also means we will pay more money to buy less consumer goods like food, clothing and everything else. What a catastrophe this will be for the middle class. The same middle class that Obama and Congressional Democrats claim to care so much for.

Second, by 2019, every family in America will owe $80,000 of debt to the federal government. When you add state and local government debts to this figure you can see what the future holds for us all.

Third, Obama and the Democrats will allow the Republican tax cuts of 2001 and 2003 to expire on January 1, 2011. This will be a serious blow to the American taxpayer, as it will result in the largest tax rate increase in our nation’s history. Income tax rates will return to the Clinton-era rates, which were the nation’s largest tax rate increases at that time. The Death Tax will return to the 55% rate, which will punish small business owners and family farmers.

Fourth, the first baby boomers will begin to retire expecting to receive their Social Security benefits. However, there is no real money in the Social Security trust fund as Lyndon Johnson and the Democrat majority in Congress took all the money out of the trust fund in 1967. They placed all the Social Security trust fund money into the general fund and replaced the trust fund with IOU’s called G-Notes. In other words, all that missing money will have to be compensated. The unfunded liabilities in Social Security and Medicare are going to increase to reach the mark of about $53 Trillion by 2013. That’s trillion with a “T”. Guess what that means? You guessed it -- even more tax increases. Obama’s own budget for this year forecasts $654 billion in payroll (Social Security and Medicare) tax revenue, while paying out $662 billion in benefits -- that’s an $8 billion deficit!

As John Adams once said, “Facts are stubborn things.” The facts concerning our future are too hard to deny. When you combine the Obama/Democrat created hyperinflation policies with tax hikes, massive debt and deficits, along with the ending of the Republican tax cuts of 2001 and 2003, added to the entitlement crisis that will ensue when the first baby boomers begin to retire, what is left is “The Coming Economic Tsunami.”

Ronald Reagan, the 40th President of the United States and the man who initiated the largest peacetime, economic recovery period in our nation’s history, had this to say about the same tax, spend and deficit exploding policies that Obama now employs, “When a business or an individual spends more than it makes, it goes bankrupt. When government does it, it sends you the bill. And when government does it for 40 years, the bill comes in two ways: higher taxes and inflation. Make no mistake about it, inflation is a tax and not by accident." This is the “Change” that Obama has given America. We must prepare to weather this hellacious storm or be consumed by it.