Christian Toto
|
Posted: Aug 02, 2016 12:01 AM
Share   Tweet
The opinions expressed by columnists are their own and do not necessarily represent the views of Townhall.com. 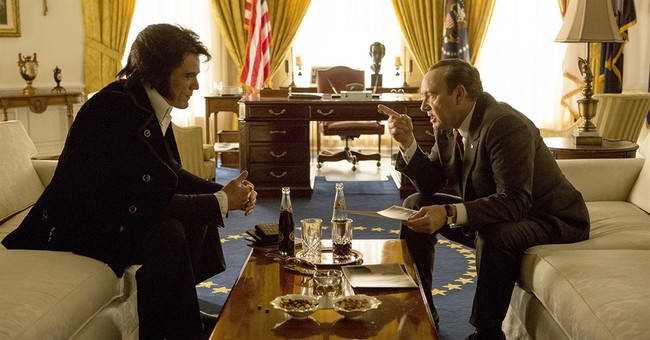 Nixon, a symbol of an older, stodgier generation, reportedly resisted the meeting. Aides convinced him the confab would make him more appealing to voters.

Four decades later, our president would lunge at the chance to meet the King of Rock.

President Barack Obama has made it his mission to connect with every celebrity he can.

Nixon’s “historic” meeting bore little to no fruit save that iconic photograph. Obama’s Hollywood fixation has actually hurt the nation.

“Elvis & Nixon,” just released on home video, captures that historic meeting. The film stars Kevin Spacey as Nixon and Michael Shannon as the King of Rock. The casting alone is slyly hilarious. Frank Underwood himself plays the uptight, soon to be disgraced politician. And Shannon, a singular screen presence, might be the last person you’d think of to play Elvis, thank you very much.

The notion of a sitting president talking serious policy with a rock ‘n’ roll star, especially one wearing a massive gold belt and cape, is played for laughs.

It’s not a laughing matter these days.

For seven-plus years President Barack Obama’s White House has been a stomping ground for showbiz elite. Celebrities en masse rushed to elect him not once, but twice. And Obama returned the favor by inviting them into his home.

He spoke at length with A-list actor George Clooney ago about the ongoing situation in Sudan. He also broke bread (salmon, to be precise) with Comedy Central jester Jon Stewart.

He routinely teamed with “Scandal” star Kerry Washington on his two presidential campaigns. Washington cooed over the commander in chief prior to last month’s the White House Correspondents Dinner.

Obama even welcomed a group of rappers for a celebrity chit-chat on crime and punishment. The administration’s “My Brother’s Keeper” program is aimed at keeping minority children out of jail and in school.

The event, held earlier this year, featured a who’s who of the rap world, including Busta Rhymes, DJ Khaled, Common, Rick Ross and Nicki Minaj. This all-star confab hit a sour note when Ross’ jewelry interrupted the affair. Seems he wears an ankle bracelet following kidnapping and assault charges.

It’s the kind of moment that would fit right in with “Elvis & Nixon.” To be fair, Ross dressed far better than Presley did for his meeting with the president, rocking a conservative black suit with Adidas sneakers.

Obama has made the most of his relentless celebrity outreach, if one judges only by approval ratings and style points.

An effective president might have used his celebrity connections to strengthen his bully pulpit. At the same time, that clout could help sell his better policies. Connect with pop culture, and suddenly the average voter sees you as both a leader and one of them.

That means they’re far more likely to trust you.

Instead, Obama’s A-list outreach primarily distracted us from his failures. A still sluggish economy. Shovel-ready jobs. The rise of ISIS. Greater racial unrest. An emboldened Russia. And the least transparent administration since the Nixon White House.

In just seven short years, Obama became a master at creation the illusion of a successful presidency, like a swirl of special effects patching over a film’s shoddy storytelling. Just look at how he used subterfuge to push his dubious deal with Iran via pitch man Ben Rhodes. It’s a bait and switch worthy of a Hollywood feature film.

And when his policies failed, his Hollywood pals had his back. His signature effort, Obamacare, proved disastrous during its rollout. He seemed far more invested in enlisting a gaggle of stars to prop up the flawed legislation. Jennifer Hudson, Michael Cera, Amy Poehler, Kal Penn and Aisha Tyler were given marching orders on how to best shill it to the public. And they did as told.

So don’t expect an “Elvis & Nixon” sequel poking fun at Obama’s Hollywood outreach, not even after Obama has left the building.