Concerned Parents Are Not ‘Domestic Terrorists’

Chris Talgo
|
Posted: Oct 11, 2021 10:51 AM
Share   Tweet
The opinions expressed by columnists are their own and do not necessarily represent the views of Townhall.com. 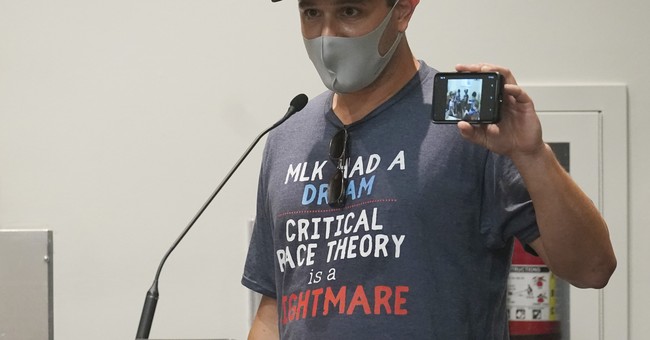 On Sept. 29, the National School Boards Association (NSBA) sent a letter to President Biden stating that “America’s public schools and its education leaders are under an immediate threat.”

According to NSBA, an organization that donates large sums of money to the Democratic Party, this immediate threat comes in the form of parents who criticize local school board officials for decisions they believe negatively impact their children.

For example, when parents attend school board meetings to voice their disapproval of critical race theory or explicit sexual content propagated in classrooms, they supposedly pose an immediate threat.

Per NSBA’s letter, “As these acts of malice, violence, and threats against public school officials have increased, the classification of these heinous actions could be the equivalent to a form of domestic terrorism and hate crimes.”

So, we now live in a world wherein parents, who fund public schools and pay the salaries of school board officials, are deemed domestic terrorists when they disagree with the far-left ideology being pushed in public schools.

Sadly, this is the state of affairs in America.

If labeling concerned parents as domestic terrorists is not appalling enough, NSBA requested the Biden administration use the PATRIOT Act, among several other heavy-handed federal laws, for the “protection” of school district officials.

According to the letter, “The National School Boards Association (NSBA) respectfully asks for federal law enforcement and other assistance to deal with the growing number of threats of violence and acts of intimidation occurring across the nation.”

In normal times, NSBA’s absurd request for federal law enforcement, including the FBI, to patrol local school board meetings would have been scoffed at.

However, these are far from normal times. As Thomas Paine once said, “These are the times that try men’s souls.”

Less than a week after receiving NSBA’s letter, the Biden administration tasked the Department of Justice with devising a plan to tackle the new threat of domestic extremism posed by perturbed parents.

On October 5, Attorney General Merrick Garland issued a memo, stating, “the Justice Department will launch a series of additional efforts in the coming days designed to address the rise in criminal conduct directed toward school personnel.”

Garland’s memo went on to state, “The Justice Department will also create specialized training and guidance for local school boards and school administrators. This training will help school board members and other potential victims understand the type of behavior that constitutes threats, how to report threatening conduct to the appropriate law enforcement agencies, and how to capture and preserve evidence of threatening conduct to aid in the investigation and prosecution of these crimes.”

Garland’s memo, which makes no mention of parents’ fundamental rights to freedom of speech, peaceably assemble, and petition the government for a redress of grievances—all protected under the First Amendment—is a shot across the bow.

Make no mistake, some school board meetings over the past few months have gotten heated, but they have come nowhere close to domestic terrorism.

According to the FBI, domestic terrorism is defined as, “Violent, criminal acts committed by individuals and/or groups to further ideological goals stemming from domestic influences, such as those of a political, religious, social, racial, or environmental nature.”

In fact, if any side is engaging in terroristic threats, one could make a case that school board members are acting somewhat similar to terrorists, given that they have had parents arrested by local law enforcement just for voicing their opinions.

Several school boards have also cut meetings short, turned off microphones while parents were speaking, and engaged in other juvenile tactics to silence their opponents.

As stated previously, we are living in a world wherein our fundamental freedoms are under attack. From freedom of speech to bodily autonomy, Americans’ civil liberties are being put in jeopardy.

The question becomes, can and will the federal government deem anyone who is not on board with its agenda a domestic terrorist? If so, we may rue the day the PATRIOT Act was passed.

Chris Talgo (ctalgo@heartland.org) is a former public school teacher and senior editor at The Heartland Institute.