Is the Right to Bear Arms in Jeopardy?

Chris Talgo
|
Posted: Mar 31, 2021 12:01 AM
Share   Tweet
The opinions expressed by columnists are their own and do not necessarily represent the views of Townhall.com. 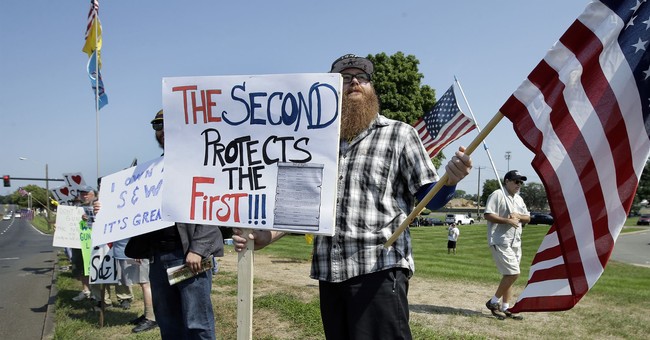 While running for the Democratic Party’s presidential nomination in 2020, Joe Biden said, “My first day of office, I'm going to send a bill to Congress repealing the liability protections for gun manufacturers, closing the background check loophole, and closing waiting periods.”

That did not happen. However, after more than 60 days into his term, a mass shooting occurred in Boulder, Colorado. Immediately, the left went into full-tilt gun control hysteria.

President Biden declared, “I don't need to wait another minute, let alone an hour, to take common-sense steps that will save the lives in the future and to urge my colleagues in the House and Senate to act … This is not and should not be a partisan issue. This is an American issue that will save lives, American lives. And we have to act. We should also ban assault weapons in the process.”

Former President Barack Obama added his two cents, “[W]e can make it harder for those with hate in their hearts to buy weapons of war. We can overcome opposition by cowardly politicians and the pressure of a gun lobby that opposes any limit on the ability of anyone to assemble an arsenal. We can, and we must.”

Although we should not be surprised at the left’s penchant to trumpet gun control in the wake of another tragic and terrible mass shooting, we should ask ourselves this fundamental question: Why did the Founding Fathers insist that all Americans have the right to bear arms? The answer might surprise you.

Contrary to popular belief, the Founding Fathers did not pen the Second Amendment so that Americans would be able to enjoy hunting, sport shooting, or gun collecting. They also didn’t intend for it to be a sentinel for personal protection.

In actuality, the Founding Fathers made the right to bear arms an unequivocal natural right that supersedes government because it is the last bastion against a tyrannical government.

Don’t believe me? Well, here is what the Founders themselves wrote about the Second Amendment.

George Washington: “A free people ought not only to be armed, but disciplined…”

Thomas Jefferson: “No freeman shall ever be debarred the use of arms.”

Thomas Jefferson: “What country can preserve its liberties if their rulers are not warned from time to time that their people preserve the spirit of resistance. Let them take arms.”

George Mason: “...to disarm the people ? that was the best and most effectual way to enslave them.”

Sadly, contemporary debates about gun control rarely dive into this aspect of the Second Amendment.

Perhaps that is because we the people are not nearly as skeptical about government tyranny as we were long ago.

There once was a time when an overbearing government that infringed on personal liberties, especially at the national level, was reason enough for Americans to hold dear their right to bear arms.

However, in twenty-first century America, those days are long gone. Unfortunately, the common creed among far too many Americans today is that the government should be the benevolent caretaker of society. And if that includes the government trampling all over the Second Amendment, well, so be it.

Yet, this is a Devil’s bargain, if ever there was one. Throughout history, tyrannical regimes have sought to outlaw guns. Why? So that the government would have a monopoly on force.

Never forget: without an armed public, the government has little to fear in terms of backlash against tyranny.

No Answers From Biden Admin One Year Into Investigation of Stolen IRS Data
Spencer Brown
Is Mike Pence Considering a Presidential Run?
Leah Barkoukis
'This Is Getting Out of Control': Border Town Still Overwhelmed with Illegal Immigrants Despite T42 Staying
Julio Rosas