Chris Talgo
|
Posted: Jan 14, 2021 12:01 AM
Share   Tweet
The opinions expressed by columnists are their own and do not necessarily represent the views of Townhall.com. 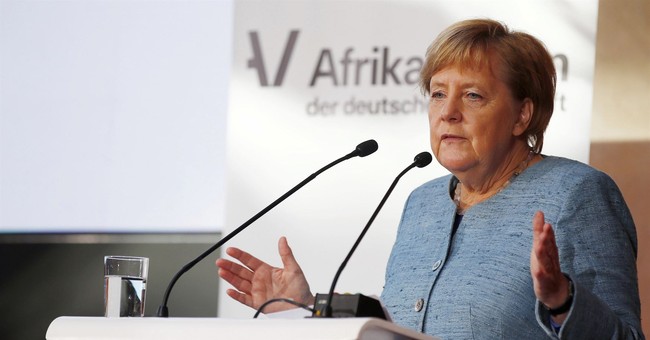 German Chancellor Angela Merkel, not a strong supporter of President Trump over the past four years, recently described the decision by Twitter to ban Trump’s account on the digital platform as “problematic.”

According to Merkel’s spokesman, “The right to freedom of opinion is of fundamental importance … Given that, the chancellor considers it problematic that the president's accounts have been permanently suspended.”

Jens Zimmerman, a member of the German Parliament, described the situation in similar terms.

“It [the Twitter ban] is problematic because we have to ask on which basis was it made, on which laws and what does it mean for the future actions of social media platforms?” said Zimmerman.

“We are talking about the head of state of a democratic country. Obviously, Donald Trump wasn't very popular in Germany. But nevertheless, this could happen to somebody else who won an election,” Zimmerman added.

Merkel and Zimmerman are right to be outraged over the actions by Twitter and other social media giants to silence the president of the United States. Yet, Big Tech’s censorship of Trump and conservative voices in general has been occurring for quite some time.

For years, Twitter has reportedly engaged in so-called “shadow banning” of prominent conservatives.

In other words, the social media censorship of Trump in particular, and conservatives in general, is nothing new. However, the acceleration of this illiberal spectacle is very dangerous and should alarm Americans.

Before the fall of the Berlin Wall and the liberation of East Germany, Germans were all too aware of the pitfalls of political censorship.

Merkel grew up in communist East Germany, where freedom of speech and political expression did not exist. The East Germans lived in terror, unable to speak their minds or express political dissent, lest the Stasi pay them a visit.

Germans are also well aware that the Nazi Party used censorship as a tool to implement a totalitarian dictatorship wherein freedom of speech and political dissent were verboten.

In other words, the Germans, unlike Americans, have recent experience living under governments that restrict freedom of speech and use censorship to silence their political opponents.

As such, we should pay particular attention when the leaders of nations like Germany raise concerns over what Twitter and other social media giants are doing to stifle a free and open public discourse, the bedrock of democracy, in the United States.

The events of the past few weeks show that Big Tech is emboldened more than ever. Their preferred candidate won the presidential election and their favored political party controls both houses of Congress.

The situation is dire. Our fundamental rights are in peril. If America is to remain the bastion of freedom, Big Tech and their illiberal censorship must be stopped.

Zimmerman, a member of the German Parliament’s Committee on the Digital Agenda, argues that, “We need to come up with regulation. And we need to be careful about what power these platforms have.”

As Americans, we should demand that our political leaders on both sides of the aisle heed Zimmerman’s advice.

Repealing Section 230 of the Communications Decency Act, which gives social media platforms an unwarranted liability shield, would be a good start. Breaking up the Big Tech monopolies, particularly Google, would also do much good.

The United States has never faced a threat like that posed by Big Tech. If we do not rein in the tech giants, Americans will rue the day we allowed Big Tech to become the nation’s political speech overlords.