Operation Valentine Is a Go

Chris Talgo
|
Posted: Feb 14, 2020 9:49 AM
Share   Tweet
The opinions expressed by columnists are their own and do not necessarily represent the views of Townhall.com. 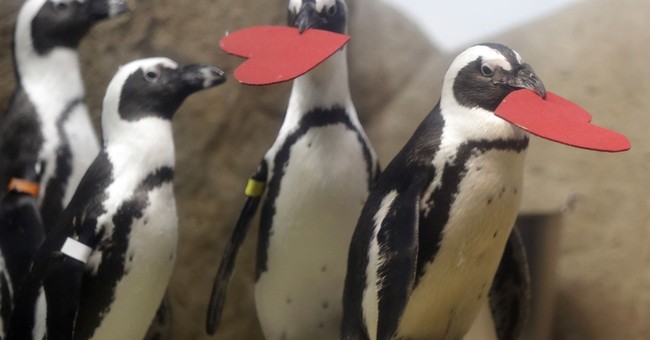 If you are like me, you may be a little sick and tired of the never-ending political vitriol that has overwhelmed our society over the past few months. Fear not, because on Friday, Americans can take a deep breath and celebrate a holiday with absolutely no political implications: Valentine’s Day.

In short, Valentine’s Day has been celebrated for millennia, beginning in the early days of Rome as a holiday to celebrate two martyred priests. In the Christian affiliation, Valentine’s Day is recognized by the Anglican Church as a “commemoration” in the calendar of saints. Likewise, the Lutheran Church also recognizes the feast day of Saint Valentine in its calendar of saints.

Over time, the religious connotations of Valentine’s Day have given way to romanticism and commercialism. In 2020, 182 million Americans are expected to spend $19.2 billion on Valentine’s Day gifts.

If you are not one of the 182 million Americans who are willing to plunk down about $110 for a gift, you can still participate in the true (and original) meaning of the holiday: commemoration.

Allow me to introduce you to Maj. Bill White, who is asking anyone and everyone to send him a Valentine’s Day card. White is a 104-year-old World War II veteran. For years, the U.S. Marine Corps veteran has been collecting special mementos, which he meticulously puts in scrap books that dominate his California residence.

Although White may not be the apple of your eye or the object of your affection, he certainly deserves to be commemorated for his bravery in battle as well as his sheer determination to keep going.

According to White, if you take the time to send him a Valentine card, “I’ll save every one of them like I’ve been saving little things that have come up until right now and they’ll be a personal part of my history.”

White has a fondness for saving special things, because it allows him to “keep track” of life’s special events. Such is why the centenarian fills his scrap books with a lifetime of memories.

This Valentine’s Day, there is no better time to show your love to White and the countless other WWII veterans who literally saved the world from the menace of Nazism and Imperial Japan.

Like most WWII veterans, White downplays his heroics in battle. While serving in the Pacific Theatre, White was awarded the Purple Heart. As he recounts his time in battle, White simply says, “When I was wounded, I didn't have any choice in the matter. A grenade blew up about 6 inches from me.

After White was carried off Iwo Jima, he went on to serve his country for more than 30 years. When asked recently to reveal how he has overcome so many obstacles, White simply responded with this pithy quip: “Just keep breathing.”

If you would like to send Maj. White a special greeting this Valentine’s Day, I am sure it will make his day, and he certainly deserves it.

The Oaks at Inglewood