Chris Talgo
|
Posted: Dec 09, 2019 10:42 AM
Share   Tweet
The opinions expressed by columnists are their own and do not necessarily represent the views of Townhall.com. 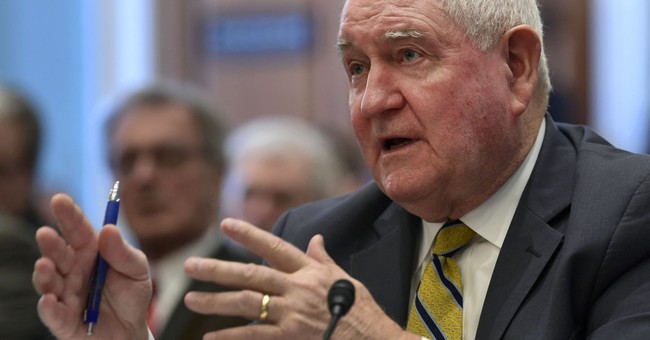 On December 4, the United States Department of Agriculture (USDA) made a long-overdue and much-needed rule change to the nation’s beleaguered Supplemental Nutrition Assistance Program (SNAP), commonly known as “food stamps.”

According to a USDA press release, “At the direction of President Donald J. Trump, U.S. Secretary of Agriculture Sonny Perdue today announced a final rule to move more able-bodied recipients of the Supplemental Nutrition Assistance Program (SNAP) towards self-sufficiency and into employment. The rule restores the system to what Congress intended: assistance through difficult times, not a way of life.”

In other words, the new rule aims to ensure that those on SNAP are not taking advantage of the bloated program. For context, consider the following. According to USDA, “in 2000, the unemployment rate was 4% and the number of Americans receiving SNAP benefits was just over 17 million. In 2019, during the longest economic expansion in history, the unemployment rate is 3.6% and yet the number of Americans receiving SNAP is over 36 million.”

Needless to say, millions of able-bodied adults without dependents (ABAWD) have relied on Uncle Sam (i.e., U.S. taxpayers) to pay for their groceries when they should rely on themselves to foot their bills.

As USDA notes, “With a booming economy that has more jobs than workers to fill them and the lowest unemployment rate in more than 50 years, now is the time for every work-capable American to find employment. In fact, the latest U.S. Department of Labor (DOL) figures show the unemployment rate is 3.6% and there are 7.0 million job openings.”

Put another way, for those Americans capable of working, without dependents, and between the ages of 18-49, get off your couch and get a job. According to USDA data, in 2016, there were about four million ABAWD on SNAP.  Of this group, nearly 3 million chose not to work while receiving food stamps courtesy of hard-working taxpayers. This is neither fair nor right.

Although some will claim the new rule is too harsh and punitive, one can also make a strong case that enabling never-ending government dependency is actually far worse for the fabric of the nation. Fortunately, Secretary Perdue understands this point.

“Americans are generous people who believe it is their responsibility to help their fellow citizens when they encounter a difficult stretch. Government can be a powerful force for good, but government dependency has never been the American dream. We need to encourage people by giving them a helping hand but not allowing it to become an indefinitely giving hand,” Secretary Perdue said.

Aside from encouraging ABAWD to get a job instead of putting their hands out for government goodies, the new rule will also save billions every year.  In fact, some estimates claim the new rule alone could save taxpayers $5 billion in the first five years, with more savings anticipated as time marches on.

In 2018, the federal government spent a whopping $64.9 billion on SNAP. Not exactly a drop in the bucket, by any means. In 2001, this figure was only $17.8 billion. This is shocking, in and of itself. Although some may blame the 2008 Great Recession for the rise in SNAP costs and enrollment, the facts and figures simply do not support this theory.

In 2008, during the depths of the worldwide economic meltdown, only 28 million Americans received SNAP benefits. However, in 2013, a full five years after the economic bottom dropped out, SNAP enrollment hit an all-time high of 47.6 million. Fortunately, this absurdly high number of Americans on food stamps has declined each year since 2013. Of course, the new rule will spur even more Americans to abandon SNAP dependency.

So, what caused the sudden rise in SNAP participation from 2008 onward? Very simple. President Barack Obama made it way too easy for Americans to get food stamps. By gutting the 1996 Welfare Reform Act, Obama made it infinitely easier for Americans (and non-citizens) to receive SNAP funds.

And now, to come full circle, maybe we should be reminded of what then-President Bill Clinton said when he signed the groundbreaking 1996 Welfare Reform Act: “First and foremost, it should be about moving people from welfare to work. It should impose time limits on welfare ... [Work] gives structure, meaning and dignity to most of our lives.”

Well said, Mr. Clinton. I (and most Americans, I bet) could not agree more.