Chris Stigall
|
Posted: Jan 06, 2022 12:01 AM
Share   Tweet
The opinions expressed by columnists are their own and do not necessarily represent the views of Townhall.com. 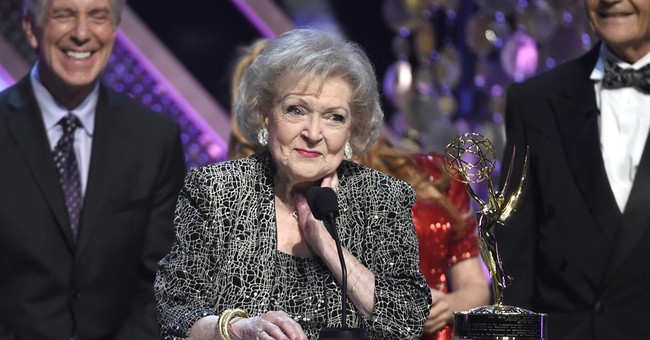 The enormous reaction to Betty White’s death and America’s decades-long love affair with the 99-year old caused me to consider why.  What is it about her that elicited such universal affection and praise from nearly everyone?

It’s not because she isn’t worthy of that kind of adoration, but it’s just so unusual for the American population to agree on much of anything, never mind the likeability of a specific personality.  Then it clicked.

I was blessed to have a grandmother in my life for as long as I did.  She babysat me as an infant and toddler.  I stayed with her many weekends through elementary school, middle, and even on occasion in high school.

My grandmother was part of all my performances and graduations.  She was the first one I told I wanted to marry my wife.  She was there when I married my wife.  She was present for the birth of all three of my kids and even watched a couple of them reach their teens.  She was a critically important person in my life.  When she finally died in 2018 I wrestled with the selfishness of my sadness.

It was hard to be too sad simply because of an unbelievable 41-years of life I got to spend with her.  That’s rare.  When I speak with people who never knew their grandparents or didn’t have that kind of relationship with their grandparents, I always feel a bit bad for them. It also reaffirms how blessed I was for such a privilege.

Betty White lived to be 99 years old – a full ten years longer than my grandmother lived.  When I read headlines like “The Tragic Death of Betty White,” I found it bizarre.  Nearly a century is a long run.  I don’t know if she was a spiritual woman, but if she was I know she must’ve been very excited to be rejoined with her late husband Allan Ludden again.  Reports are her last word was “Allan.” Who knows if that’s true, but if it is it warms the soul.  Just as she always did.

A Forbes tribute to her discussed how young people today could learn from her professionally because she adapted as media changed from radio, to TV, to digital over her decades of entertainment.  They commended her ability to adapt, embrace, and change with formats and genres.  She never stopped working.

Feminists celebrated a quote of hers that she never understood the phrase “grow some balls.”  White felt women’s anatomy was a better symbol of strength because “those things really take a pounding.”  (My grandmother wouldn’t have liked that joke, but probably would have giggled anyway.)

Animal rights activists celebrated her life long love of animal rescues and adoptions. Celebrities celebrated her timing, her comedy, her longevity, and staying power in Hollywood.

While all of those tributes may be true, I don’t think that’s really why most feel such warmth for Betty White.

I think it’s that she projected a sincere kindness, tolerance, positivity, decency and warmth that instantly transported many of us to a place in our minds that either reminded us of our grandmothers or made us wish she was our grandmother.

For me, Betty White represented Saturday night at my grandparents’ house.  They usually made my favorite meal and then Grandpa would go watch TV somewhere else in the house while Grandma and I would watch Saturday night sitcoms. One of those Saturday night shows was “The Golden Girls.”

For years I watched those hilarious fictional grandmothers while laughing with my actual grandmother.  Grandma even let me stay up late to watch “Saturday Night Live” (when it was still good) later in the night.  I’d wake on Sunday mornings to the smell of Grandpa cooking breakfast and then it was off to church together on Sunday followed by a family lunch prepared – once again – by the loving hands of my grandmother.

As I got older and staying at my grandparents became something they understood teenagers weren’t as excited to do, there would be no better memories for me in my life than the weekends I spent in the living room laughing and talking with my grandmother while Betty White was on TV.

Subconsciously, “The Golden Girls” became a fictional representation of my very real grandmother.  White in particular.  My grandma wasn’t dumb, but she was warm and kind and tolerant and wholesome.  She was just…a good person.

I didn’t know Betty White, but I can’t find a single ill word spoken or written about her anywhere.  It’s almost as though she led a perfect life of kindness and decency that most people don’t achieve.  At least we don’t see ourselves that way.  White likely didn’t either.

Similarly, my grandmother wasn’t a perfect woman.  But I thought she was. Most of us who loved our grandmothers feel the same way.  I couldn’t imagine anyone thinking ill of her.  You’d never hear her say an unkind word or make anyone feel unwelcome in her presence either.