Chris Stigall
|
Posted: Nov 21, 2019 8:03 AM
Share   Tweet
The opinions expressed by columnists are their own and do not necessarily represent the views of Townhall.com. 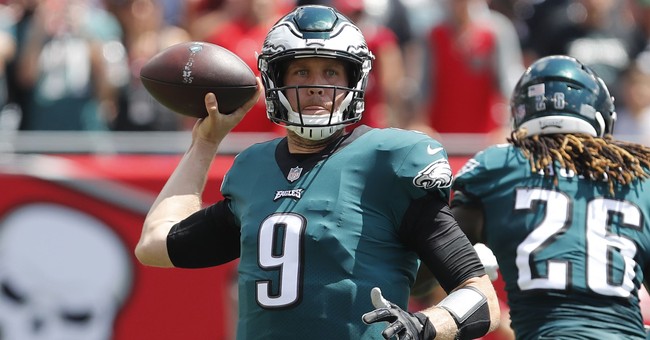 As a dad it feels like it’s harder and harder to find examples of great character in popular culture.  Especially in the world of competitive sports where the headlines are mostly about kneeling during the National Anthem, siding with the Chinese government over Hong Kong for money, and hitting other players over the head with football helmets.

Which is why I felt it important to call attention to two stand-out athletes who not only perform at a high level in their respective sports, but more importantly stand out as men of strong, moral character.

Don’t misunderstand this as shirking my duties as a parent, expecting the outside world to teach and raise my kids for me.  I never believed in the ridiculous criticisms hurled at President Trump when his political rivals exclaim, “Our children are watching!”

Nope.  We’re supposed to watch what our children watch.  It’s up to us to impart our impressions, opinions, and lessons as we see fit.  We’re not supposed to leave child rearing to athletes, actors, singers, and presidents.

But when we see excellence we hope our kids might emulate, it’s important to show it off, point it out, and celebrate it.

Jacksonville Jaguars quarterback Nick Foles had an unfortunate start to his new season this year.  Fresh from leading the Philadelphia Eagles to a Super Bowl victory as a back up to Carson Wentz in 2018, Foles was eventually destined for a proper payday for a championship quarterback.  But it wasn’t to be in Philly.

It’s been reported Foles inked a four-year, $88 million dollar deal to become the face of the Jags.  In the first quarter of his debut game, he threw a gorgeous touchdown pass reminiscent of his Super Bowl magic.  But he was hit hard just after the throw.  It was ugly.  Ruled a broken clavicle.  He was sidelined for the game and the entire first half of this season.

Foles returned to play last weekend after eight weeks out, but not before his back-up had time to become a stand-out himself.  It was a frustrating and disappointing start.  It didn’t work out the way he’d hoped.  A member of the media asked him about the violent swing in the fortunes of his career.  Foles’ response was so beautiful, I played it for my Bible study group last week.

"Just like when I hoisted the Lombardi Trophy, the reason I'm smiling, my faith was in Christ. In that moment, I realized I didn't need that trophy to define who I was because it was already in Christ...Same thing happens when I get injured...It's not about us. If you make it about yourself, you're probably going to go home at night and lay your head on your pillow and be very alone and very sad."

That’s just some of Foles’ incredible two-minute answer.  The entire thing is worth reading.

One the same day Foles made his return to the football field, in Buenos Aires a young PGA pro from Pennsylvania named Brandon Matthews was on the brink of his second career win, and a corresponding spot in the 2020 British Open in a sudden death playoff in the Argentine Open.

Matthews had to sink an eight-foot putt to continue on.  He was feeling very confident in his game and his ability to sink the putt, he shared with me in an interview this week.  But in the deafening silence, as he brought his putter back to take the final stroke – a loud yell came from the gallery.

Matthews missed the putt and the opportunity an up-and-coming golfer works their heart out to achieve – qualifying to play in a major tournament.

Obviously frustrated and disappointed, Matthews retreated to the clubhouse where tour officials later briefed him on the source of the sudden outburst.  It was a fan in the gallery with Down syndrome who they explained became so excited he wasn’t able to contain it.

Matthews asked officials to take him back to the course and introduce him to the man.

Matthews hugged the man, signed his glove as a gift, and assured him he was not upset. The story made international news. A beautiful moment of grace and kindness extended in a very difficult moment for a competitor.

We need more folks in the public eye like Nick Foles and Brandon Matthews. Not to raise our kids. Not even as role models. We can use them to remind us all of the bigger, more important things in our lives.

Kindness, graciousness, quiet dignity, gratitude, compassion and humility – they’re in short supply it can sometimes seem. Last weekend, they made a return to the professional sports stage at a time we could really use them.

You can bet I told my kids about it.