Chris Stigall
|
Posted: Mar 21, 2019 12:01 AM
Share   Tweet
The opinions expressed by columnists are their own and do not necessarily represent the views of Townhall.com. 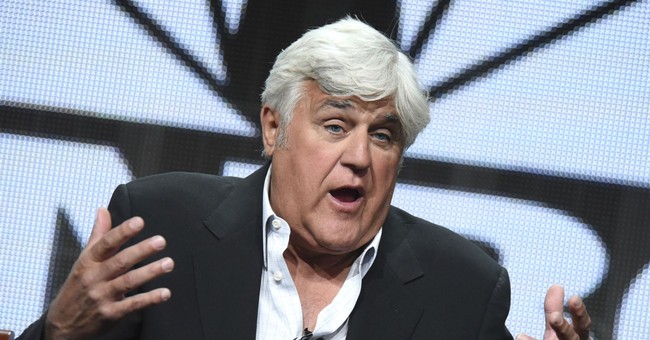 I’ve never seen such a nasty reaction to something so simple, honest, and sincere.  Jay Leno appeared on the "Today Show" last week to discuss the importance of monitoring cholesterol.  During the interview, Al Roker pivoted to ask if he missed hosting the “Tonight Show.”  Leno’s answer detailed the reasons it’s no longer a forum he recognizes or misses.

As I noted last month, Colbert stopped pretending he could entertain non-leftists and decided to peddle partisanship full time. Once again, when asked about Leno’s comments Colbert didn’t dispute it.  In fact, he proudly embraced it.

“I agree with what he said. He said it was a different time….now there’s one subject, so people see your politics more when you do it now, but I’m fine with that. I don’t think there’s anything wrong with saying this person is damaging the nation…I feel seriously about what’s going on in the country….I’m there to make everybody feel better and know they’re not alone in that.”

Does Colbert hear himself?  He’s proud of a “comedy/variety” show people can tune into to hear him discuss why he believes the President is “damaging the nation.”  Further, that variety/comedy show’s stated goal is to make “everybody feel better about what’s going on” and that “they’re not alone.”

Who’s “everybody?”  Who’s “they?”  Well, we know who.  People who didn’t vote for Donald Trump.  Anyone who did vote Trump and happens to support his agenda can watch a syndicated re-run, I suppose.

A man hired to host a variety show on a major network has effectively declared sixty-plus million voters unwelcome to tune in.  In an era of perpetual corporate panic and preoccupation not to offend - major television networks continue to openly embrace politically segregated programming as a preference.

To really drive this home, HBO’s John Oliver took to his battle station and fired both barrels at Leno’s review of late night.

During his “Last Week Tonight” monologue about the necessity - yes, necessity - of publicly shaming those with whom he disagrees, Oliver took aim at Leno’s plea for civility by airing a montage of old Leno jokes from his days on “The Tonight Show.”

The clips were standard nineties fare.  Literally, everyone told versions of the same jokes.  They wrote themselves.  Naughty sex jokes and puns about a grown woman and the most powerful man in the world having sex were layups.

But they weren’t malicious.  They weren’t told with the goal of seeing Clinton run out of office or framed as if he posed some great threat to the nation.

That’s the key distinction from then to now.

Still, Oliver beat his chest with the righteous indignation one must display for authenticity and applause in today’s “wokeness” where gown women who diddle the President are victims, not “sluts.”

“Those jokes have not dated well in any sense of the word, and they’re pretty rough,” Oliver ranted, “especially coming from a guy who just this week complained about late-night TV, saying he’d like to see a bit of civility come back, you know, like that time when he did a bit with a fake book about Lewinsky titled ‘The Slut in the Hat.’

Oliver concluded, “…if that’s what he means by civility, may I offer my new book, ‘Oh the places you can go to f--k yourself, Jay Leno!’ Look how civil this is!”

The rage makes your sides hurt from laughing, doesn’t it? Once again, do they hear themselves proving the point?

If Oliver watched the entirety of Leno’s comments on “Today” he’d know Leno went on to say how tough he thinks the job of joking about the President is now because Trump is already such an outsized political figure.

While I don’t agree with Leno’s assessment any more than those who used to say there was “nothing funny about Barack Obama,” the broader point remains.

It didn’t use to be a prerequisite to wear your politics on your sleeve to joke about politicians. Nor was it required to be a regular reader of the New Yorker to qualify as a joke teller.

That’s not the case today.  Late night hosts feel a duty to weaponize their shows with the belief they are helping to actively defeat a president while boosting his opposition.  At the same time, they believe they’re providing a “safe space” for those who can’t bring themselves to function in Trump’s America.