Please Don’t Mess This Up, Kentucky

Chris Skates
|
Posted: Mar 04, 2016 12:16 PM
Share   Tweet
The opinions expressed by columnists are their own and do not necessarily represent the views of Townhall.com. 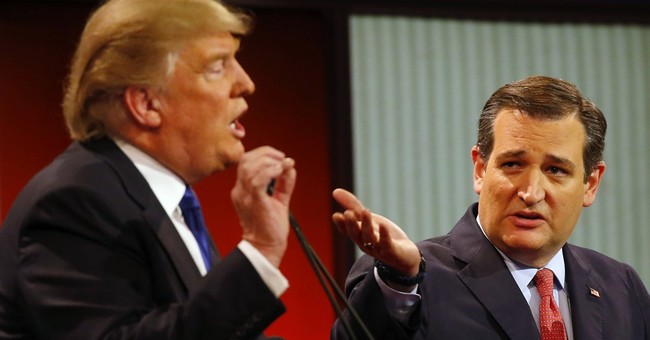 Did you watch the debate Thursday night? Could the choice be any clearer? If you are an angry voter, if you are beyond frustrated at being ignored by virtually all of Washington, I am with you. But the abject silliness of Donald Trump, the juvenile comments (bragging about his private parts in a presidential debate…a new low in the history of presidential politics), the complete inability to clearly articulate a single policy position when challenged to by both Rubio and Cruz, has to break our party out of its stupor. Donald Trump is not qualified…period. In fact he is patently unqualified.

Not only could he not pass a high school freshman civics course (example: “my sister {a federal judge} just signed a new law,” he stated last week), but if, after having hurled every insult in the book at the other candidates for weeks, he cannot handle a few jabs without totally losing his composure, how will he handle the Clinton attack machine in a general election?

One of the most significant roundhouse blows of the night was leveled against Trump by Ted Cruz. Cruz asked:

“Let me ask the voters at home, is this the debate you want playing out in the general election? The stakes in this election are too high. For seven years, millions of Americans, we’ve been struggling, wages have been stagnating, people are hurting, our constitutional rights are under assault. And if we nominate Donald, we’re going to spend the spring, the fall, and the summer with the Republican nominee facing a fraud trial with Hillary Clinton saying why did you give my campaign and my foundation $100,000?”

Those are completely valid, substantive, points. And thus did Cruz conduct himself throughout the debate. Trump, who has been a serial interrupter in every debate, was even lectured by Cruz like a school boy, “Donald, please stop interrupting. I know it’s hard for you. Breath…breath.” A bit off putting, perhaps, but Trump has nobody but himself to blame. He set the tone weeks ago.

I already laid out just a few of the bona-fides that Cruz brings to the table in a column earlier this week. That was only a partial list. Given Cruz’s education, conservative accomplishments (he did a great job of highlighting his wins before the US Supreme Court on religious liberty, Second Amendment rights and others in one succinct answer) there is absolutely no doubt who is the true conservative, the true fighter, and most qualified candidate in the field. Personally, I cannot fathom why he is not leading in every state poll.

I write for several outlets so I get a lot of email feedback and sometimes readers reach out on social media or locals stop me to discuss politics. So by now I have had about thirty of forty people who I respect and like and mostly agree with on issues tell me they don’t like Ted Cruz. But in each and every case the only objections I hear to him are that he is off putting in his manner. Women in particular tell me he strikes them as “a little creepy”. Okay. I can see it a bit. I would counter that Trump with his crass manner, his bragging in books about his many affairs with married women, and his recent comment that his daughter has a hot body and if she weren’t his daughter he would date her, is WAY creepier.

But more importantly, are we really going to cast off the strongest conservative candidate, the most accomplished constitutional scholar (he was even complimented as such by his Harvard Professor and ideological opponent Alan Dershowitz), and the most staunch defender of the Bill of Rights we have seen since Reagan simply because he has come across badly sometimes on TV? As someone who has met Cruz once and heard him speak in person twice, I can tell you that he does much better in person. Still, the man is not running for best actor or talk show host. He is running for Chief Executive of the country. It will be in person that he will meet with the Putins of the world.

And please, don’t buy into the inevitability of Trump as nominee. Despite his repeated bragging last night about the degree of his lead in the polls, that’s not how we nominate candidates. We nominate based on delegates. And as of this writing Cruz is a close second, only 80 delegates behind for a nomination that requires over 1,200. If he wins Kentucky this weekend it can close the gap even more.

Cruz said it best, the stakes in this election are too high. You’re right to be angry at Washington. Focus that anger on a candidate who actually knows the Constitution inside and out and has actually won on pivotal issues. Don’t mess this up, Kentucky, you are not Alabama or South Carolina. You’re smarter than that.