The Best Counter to Ever-Aggressive Atheism

Chris Salcedo
|
Posted: Nov 13, 2018 12:01 AM
Share   Tweet
The opinions expressed by columnists are their own and do not necessarily represent the views of Townhall.com. 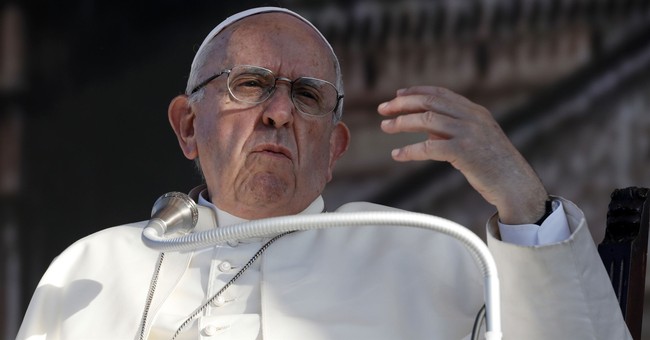 It is not news that the Catholic Church is in crisis.  It’s a crisis that seemed to unfold in slow motion but is excruciatingly acute. For years the number of young people leaving the Church has been rising.  Over half of people raised Catholic leave the church at some point. The percentage of educated Catholics who remain in the Church is far below the average of other religious groups in the US. And if this were not already a dire situation, prolonged sex scandals have tremendously tarnished the church. Due to his lackluster response to those scandals, Pope Francis has earned an approval rating below 50%. In Good Faith: Questioning Religion and Atheism by Scott A. Shay is aptly named for the contemporary Catholic landscape. Many cradle-born Catholics feel they have more questions about the Church than the Church affords them answers. In this book, written by a Jew, but incorporating interviews with Catholics and other monotheists, we Catholics may find some answers we have been seeking.

In Good Faith is ostensibly written as a reply to the new atheism. Each section covers the main new atheist claims against religion that can be summed in the view that religion is immoral and irrational. For the atheists you cannot be a modern thinking person and be religious. It is this charge that Scott answers in the most unexpected way.  He claims that atheist critiques of religion are misdirected, they are accurate critiques of idolatry, not of monotheism. In fact, Shay explains that to understand monotheism you must understand idolatry.  Today few of us monotheists do.  If we did, we would not only understand monotheism is, by definition, rational and moral, but why the history of the Church has often fallen far short of the ideal, and even at times betrayed it.

Idolatry, Shay explains is a lie about power and authority. It is the practice of deifying a finite person, animal, thing, or even idea. When people deify something finite they empower it and authorize it to rule over them whether intellectually, morally, or socially. If nature is divine, it must be worshiped not studied, there is no science. If a person or object is divine, it must be served uncritically, and there is no morality. If a ruler is divine, then his word is law and there is no justice. Shay argues that the Bible’s rejection of idolatry is the single most important philosophical and moral contribution of monotheism. Far from being irrational and immoral, the belief in one omnibenevolent, omnipotent, and omniscient God, freed man from the idolatrous beliefs in the divinity of finite things that hampered his progress. The atheists miss this point, because monotheism and idolatry are in fact irreconcilable. But more to the point, Shay shows how the monotheistic message against idolatry is as relevant as ever.

In each section, Scott not only unpacks the atheist criticisms, he shows through explorations in psychology, sociology, history, and the hard sciences why we humans still desperately need to reject idolatry.  Even after 3,500 years of monotheism, rulers still build statues of themselves and proclaim their supernatural powers like Kim Jong-il. At times we place our faith in corrupt people and give them a pass. Harvey Weinstein, Bill Clinton and Keith Ellison spring to mind. Some believe they are idols who can’t be displaced.  Yet not all of the examples of idolatry come from outside religion. Many of the atheist criticisms of the Church, Mosque, and Synagogue ring true. This Shay explains is because monotheists have too often become idolaters in religious garb.

Shay reminds us that the second commandment is not to take the Lord’s name in vain. He explains that this means more than blasphemy, it means distorting God’s message. In other words, each time a monotheist presumes to be the sole spokesperson for God without referring to Scriptures or by distorting them, he is speaking God’s name in vain. As Scott describes, the history of organized religion has been an ambivalent run of God-fearing people who fought against injustice and those who in the name of God or under the cover of the Church committed wrongs. As monotheists we must be just as focused at cleaning our own house of idolatry as in spreading the teachings of monotheism outside.

Ronald Reagan, with some help from the Founding Fathers, articulated the need for a God-centered people to run America. Absent a belief in God, so many get mired in this flat world with corrupt systems made by man. There is no, “prompting of the conscience,” Reagan observes, when our leaders regard themselves as the ultimate authority. Shay expands on the examination of America’s need for a just and moral people, in and out of government. Shay explains idolatry is humanity’s default mode. Whether we believe in God or not we must reject idolatry. Shay’s book is a treasure for Catholics seeking to come to terms with the beauty of our monotheistic teaching, the many wonderful Catholic teachers and the many crimes of Catholics and even the Church itself. In Good Faith responds to this dilemma as its title suggests and offers readers, fascinated by science and religion, an intellectual challenge we should not shrink from undertaking.

Chris Salcedo, is a nationally recognized radio talk show host heard on WBAP is Dallas TX and KSEV in Houston TX. He is the author of the book Liberty Rises, and the Executive Director of The Conservative Hispanic Society.