Will Michigan Become a Sanctuary State Under Gretchen Whitmer?

Chris Salcedo
|
Posted: Nov 02, 2018 12:01 AM
Share   Tweet
The opinions expressed by columnists are their own and do not necessarily represent the views of Townhall.com. 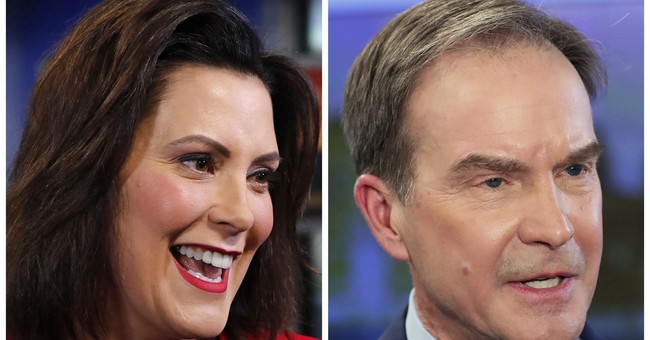 Politicians often look at policies regarding immigration through a myopic lens seeing the good that immigrants have done for our nation while ignoring the dangers and perils. This is a consequence of these people often securing their families with paid security behind tall walls, while leaving “We the People,” to deal with results of their folly. That is unfortunately the position adopted by Gretchen Whitmer and Galvin Gilchrist as they close out their campaign to be governor and lieutenant governor of Michigan.

Michigan as a border state, and a place where my mother’s family still calls home, faces different challenges than states like Arizona and California. They don’t face the threat of caravans of thousands of migrants heading south determined to cross the border no matter that the law says. But that does not make their challenges any easier.

From human and sex trafficking to the importation of illicit drugs across our borders, Michigan has its hands full dealing with the trials of bordering another nation.  State and local officials have worked together to stem the flow of opioids into the state.  They have partnered in efforts to confront the sad reality of human trafficking. They have cooperated in creating an organized crime enforcement task force investigating and dismantling transnational criminal organizations, violent drug trafficking organizations, and firearms trafficking organizations.

This successful partnership is now at risk thanks to the rise in the polls of Gretchen Whitmer and Galvin Gilchrist, the prohibitive favorites to win next Tuesday’s election for governor and lt. governor.

Whitmer and Gilchrist are advocates of sanctuary city policies which would prohibit local authorities from working with federal law enforcement agencies when it comes to enforcing immigration law.   During a recent debate, when pressed by Republican Bill Schuette, about the policy, Ms. Whitmer declined to answer the question instead attacking her opponent as being divisive.

Adoption of the policy would be a radical change in the wrong direction. In fact, currently procedure by the Michigan State Police require to inform federal officials when they encounter those who have entered the nation illegally. That cooperative spirit would be torched by the adoption of a sanctuary state law which would limit the ability of local law enforcement to work with their federal counterparts.

Michigan would be vulnerable. In addition, Ms. Whitmer has argued for the elimination of ICE, the federal law enforcement agency designed to protect our borders.  Mr. Gilchrist has taken that rhetoric on step further by suggestion the Department of Homeland Security should be eliminated, as well.

That begs the question – who would protect the state from criminal enterprises shipping drugs, paraphernalia and even human beings across the border? The answer is no one. As the newly elected Democrats would institute the national party’s “foreigners first,” policies.

Rather than stand up for the men and women of law enforcement, the Whitmer/Gilchrist administration would handcuff those who are protecting my family, leaving communities and neighborhoods to the mercy of criminal enterprises and organizations. This continuation of the Democrat’s national policy of ignoring laws that don’t advantage their political objectives has already cost our nation dearly.

Michigan does not dare repeat the mistakes of the past by rewarding Democrats with electoral victories.

Voters in Michigan should note that Republican Bill Schuette offers a better solution.  He has pledged to work with federal officials to protect our borders.  He has promised to never allow Michigan to be transformed into a sanctuary state.   He has also pledged to oppose the outlandish suggestion by both Whitmer and Gilchrist that the state should be supplying drivers’ licenses to illegal aliens. Schuette will be an ally for and have an ally in the Trump White House. This will afford the people of Michigan vital resource needed to keep their people safe.

Imagine a Whitmer/ Gilchrist cabal, joining the lawless chorus of national Democrats, positioning Michigan in an endless battle with Washington in order to score cheap political point for an increasingly irrelevant party. Lost will be the hopes, dreams and security of the people of Michigan.

There is less than a week left for voters to wake up. For the sake of Michigan’s communities and neighborhoods, it is my sincerest hope they do.