The Age of Permanent Crisis

When you look at the average price of gold over time, there are several interesting trends that emerge.  Investors buy gold as a hedge against inflation and, over a very long period of time, that holds up.  More often, investors are buying gold as insurance in a crisis; as a safe harbor investment in times of uncertainty.

Let’s start by looking at the average price of gold between 1979 and 1989.  I’m using average prices to even out the parabolic demand periods which can throw off analysis.  The data comes from the World Gold Council.

In the late 70s and early 80s the U.S. was still trying to fight off the effects of stagflation and a recession.  The crisis spurred a rise in gold prices, which is to be expected, but then prices dropped quickly back to near normal for that time period and traded in a relatively narrow range, dancing around the $400 mark for nearly 20 years.

The difference is immediately obvious.  In the late 70s we had a crisis, we recovered and went on our merry way, but something changed in the late 90s.  According to the price of gold, we entered a period of prolonged economic crisis.

I would maintain that, starting in the late 90s, the world entered a period of permanent economic instability.  It was not as obvious in the 2000’s when the economic effects in the U.S. were being masked by an artificial boom in the housing market and two wars funded by deficit spending.  The collapse of the mortgage industry and banking system brought home the ugly reality with a bang.  Using the average price of gold as a baseline, you can see that what we experienced in 2008 could be predicted from the trend line.

The unemployment rate we’re seeing today is, I believe, a new reality.  Where is the growth going to come from to spur the demand for hiring and who is going pay for it?  There is not any real driver for sustainable growth I can see, either in the U.S. or Europe, which I believe partially explains the simultaneous panic we see on both sides of the Atlantic.

China has managed to stave off most of the effects of a global slowdown by massive infrastructure investments; new roads, high speed rail, and construction projects on a grand scale.  The Chinese are putting so much money into infrastructure it’s straining their bond market just trying to pay for it all.  They can’t keep that up forever; no economy can survive with the government as the only permanent source of demand.  The Chinese also help themselves by engaging in massive currency manipulation and protectionist trade policies. 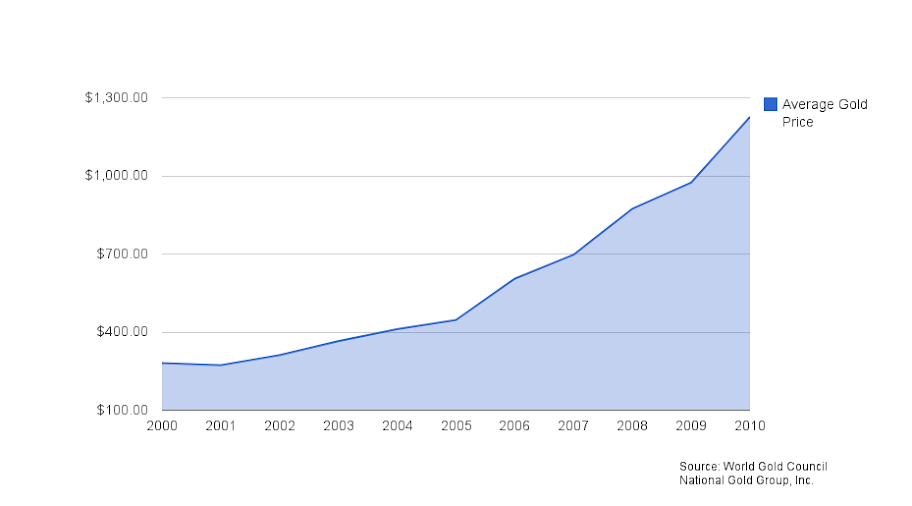 The governments of Europe and the U.S. are caught in a bind between a lack of sustainable growth and mountains of sovereign debt.  The funny money policies of central banks can stave off collapse, for a while, but zero percent interest simply cannot be maintained indefinitely.  In the U.S., traditionally the global economic leader, we’re paralyzed by political gridlock.  The world can’t count on the U.S. to find a path out of the quagmire and they’re scared.

As far as the future of the price of gold goes, it may be above that trend line now, but not excessively.  The world desperately needs money that is not subject to currency manipulation and, historically anyway, that’s been gold and silver.  So look for the price of gold to continue on the trend until we either find a sustainable driver for growth, experience a global economic collapse, or a world-wide revolution that pushes the economic reset button.