Chris Edwards
|
Posted: Apr 01, 2016 12:01 AM
Share   Tweet
The opinions expressed by columnists are their own and do not necessarily represent the views of Townhall.com. 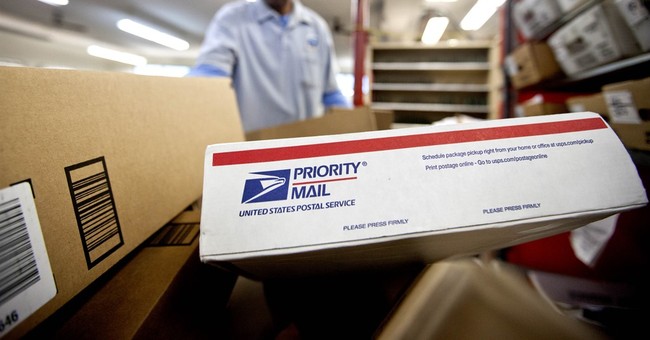 The next president will confront a range of fiscal crises that the current president has ignored. One of them is the ongoing implosion of the U.S. Postal Service (USPS). With the rise of email, the volume of snail mail has plunged, and the USPS has lost more than $50 billion since 2007. The red ink will continue to gush as more bill paying, advertising, invitations, and other communications go online.

The decline of letter mail is not unique to the United States, and other countries have shown us what to do about it: privatize the postal system and open it to competition. Those reforms would allow the postal industry to adjust to the modern Internet-based economy.

USPS in a Vice

The USPS is losing billions of dollars a year even though it enjoys a range of government-conferred benefits. It has monopolies on first-class mail (letters under 13 ounces) and standard mail (bulk advertising items). It also has a monopoly on access to mailboxes, which is a unique protection among postal systems in the world.

Furthermore, the USPS borrows from the U.S. Treasury at subsidized interest rates, pays no federal or state taxes, is excluded from local zoning laws, and has the power of eminent domain. But even with these advantages, the USPS loses money because Congress prevents it from cutting costs. Congress blocks the company from closing unneeded post office locations, and it has blocked plans to end Saturday delivery.

The USPS’s costly union workforce is another problem. The company’s worker compensation is substantially higher than for comparable private-sector workers. Collective bargaining agreements—which cover more than four-fifths of the USPS workforce—make it more difficult for management to make cost-saving changes, such as increasing part-time work and introducing further automation.

These rigidities combined with plunging demand for mail have put the USPS in a financial vice. First-class mail volume has fallen 40 percent since a peak in 2001—from 104 billion pieces to 62 billion pieces. That decline was driven by the rise of email, Facebook, Evite, and Internet bill paying, and the decline of printed magazines. The USPS’s financial challenges have been compounded by a legal requirement to pay down the company’s unfunded liabilities for retiree health care.

Other nations with money-losing national postal companies have deregulated their systems. Britain, Germany, and the Netherlands privatized their major postal companies and opened them to competition. Many countries now have more entrepreneurial postal industries than we do. Indeed, the U.S. ranks near the bottom of the Consumer Postal Council’s 26-country “Index of Postal Freedom.”

Congress should free our postal system by privatizing the USPS and repealing its various legal monopolies. Those reforms would give entrepreneurs a chance to improve America’s postal services. In 1979, when the USPS— under political pressure—lifted its monopoly over “extremely urgent” mail, we saw the growth of innovative private delivery firms such as Fed Ex.

Instead of privatization, some USPS supporters want the company to expand into banking, payday loans, grocery delivery, and other activities. But it is unlikely that a government agency—if not subsidized—could out-compete private firms in other industries. Past USPS forays into non-mail areas, such as electronic bill paying, ended in failure.

Currently, USPS raises prices on its monopoly products and uses those revenues to subsidize its products in competitive markets, such as express mail and package delivery. For competitors such as Fed Ex and UPS this is unfair because—unlike USPS—these private firms have to pay taxes, borrow at market rates, and follow all the normal business laws and regulations. In a 2015 study on USPS finances, economist Robert Shapiro found that “without its subsidies, [the USPS] probably could not compete at all” against these more nimble private firms.

A number of centrist think tank economists, including Robert Atkinson and Elaine Kamarck, have proposed that the USPS be partly privatized. The government would continue to be responsible for ensuring “universal service” to every home, but the collection and transportation of mail would be opened for competition.

USPS supporters fear that rural areas would be left out unless the government required universal service, but that is probably not the case. Rural post routes can be as cost-effective to serve as urban routes because rural letter carriers stay in their trucks and use roadside boxes, whereas urban letter carriers often walk their routes.

All that said, a universal service requirement for paper mail is not needed in the modern economy. Electronic communications bind the country together without it. Household-to-household personal letters have plunged to just 3 percent of total mail volume today. Advertising represents 60 percent of the entire household mail volume. Bills and other business statements are the second largest type of mail, but these are being replaced by electronic payments, which now account for 63 percent of all bill payments.

Essentially then, Congress imposes a rigid monopoly on the nation so that we can continue to receive mainly “junk mail” in our mailboxes six days a week. But there are more than 200 billion emails blasted around the planet every day, so it makes little sense to retain special protections for the government’s old-fashioned paper delivery system.

In a Washington Post op-ed, former U.S. Postmaster General William Henderson said, “What the Postal Service needs now is nothing short of privatization.” He was right. Congress should wake up to changes in technology and to postal reforms around the world. Other countries have shown that postal liberalization works, and it would work in America as well.