Charlyce Bozzello
|
Posted: May 01, 2020 12:01 AM
Share   Tweet
The opinions expressed by columnists are their own and do not necessarily represent the views of Townhall.com. 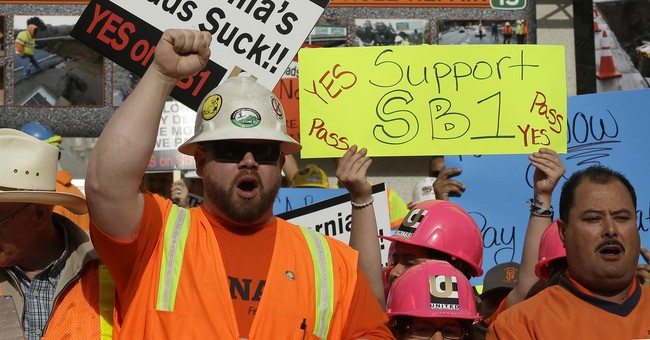 There’s more opportunity for independent contractors in the gig economy than ever before. While over 30 million Americans have newly filed for unemployment during the coronavirus crisis, companies that hire gig workers are still expanding opportunities.

Labor unions and their surrogates see an opportunity to organize this growing workforce. And their efforts are incredibly well-coordinated. In fact, it turns out recent gig worker strikes -- including one set to take place on May 1 -- are thoroughly stage managed by one labor-backed “worker center” in particular.

Unions can’t directly organize the gig economy, since workers for apps like DoorDash and Shipt are self-employed contractors, not employees. To get around this limitation in California, unions pushed for the state's harmful AB5 law that redefined thousands of independent contractors as employees. Short of installing a similar law nationwide, unions have found another workaround for organizing non-employees via worker centers.

These centers have become a way for unions to rebrand their outdated business models. What’s more, they’re not required to follow many of the same legal requirements as labor unions.

The Service Employees International Union began worker center Fast Food Forward with the goal of unionizing New York City restaurant employees. The SEIU funded the group to the tune of $2.4 million in 2012. The union eventually poured over $100 million from dues money into the failed campaign to organize fast food workers. Hospitality worker union Unite Here also made an initial investment in Restaurant Opportunities Centers United (ROC), which has grown into a national effort to organize full-service restaurant workers.

As the percentage of private-sector union members in the U.S. continues to plummet -- now at just 6.2 percent -- unions are probing outside of traditional workplaces for new cash flow opportunities. Since 2017, the SEIU, Teamsters, and United Food and Commercial Workers (UFCW) have all funneled millions into Working Washington, Working Partnerships USA, and Jobs with Justice -- all front groups for organizing gig workers.

But that’s not the end of the story. These groups, led by several key players, are now backing a new organization, the Gig Workers Collective (GCW).

Predictably, many gig workers aren’t interested in being organized by these faux unions. Whether in news reports or on social media, gig workers have spoken up against calls to strike. One worker said her gig company was “not an employer…They’re a way for me to make extra money.” Another said he wouldn’t be striking: “I’m unemployed, and need the deliveries to supplement my unemployment insurance, so I can pay my mortgage, and other bills.” Yet another warned his fellow gig workers, “You have been gaslighted by the gig workers collective.”

Considering worker centers are advertising for people to sit out of the workforce while millions of Americans remain unemployed, this outcome isn’t surprising.

These highly coordinated efforts to organize the gig economy are meant to give the appearance of one voice, united by multiple organizations and thousands of workers. In reality, it’s just the same old union agenda masquerading as a new idea for a new generation of workers.

Charlyce Bozzello is the communications director at the Center for Union Facts.