Charlotte Hays
|
Posted: Apr 29, 2016 12:01 AM
Share   Tweet
The opinions expressed by columnists are their own and do not necessarily represent the views of Townhall.com. 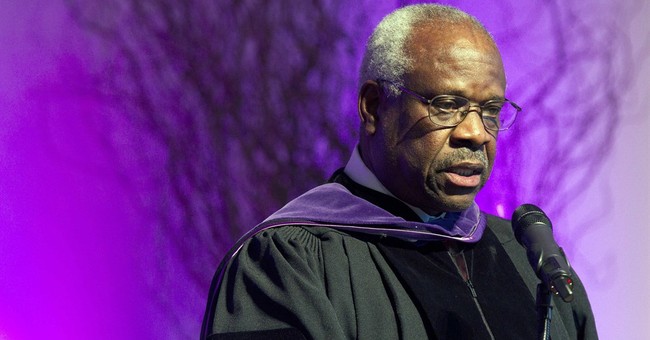 "Although those hearings were a generation ago, Confirmation brought to mind more recent congressional proceedings with a lone woman witness facing a mainly white, male set of inquisitors, and another striking outfit, this time dark purple. Hillary Clinton was the star of this show trial, the Benghazi hearings last fall," writes Jill Abramson in the Guardian.

For Abramson, the former New York Times editor, the new HBO movie Confirmation shows that the persecution of women by men in Washington hasn't changed between 1991, when the Thomas hearings were held and last year, when Hillary Clinton was asked some long-overdue questions about Benghazi. Abramson, you may recall, teamed with Jane Mayer to write Strange Justice, about the hearings and, despite stiff competition, it was perhaps the nastiest portrayal of Thomas ever written.

You know what really hasn't changed in Washington in a quarter of a century on since the Thomas hearings? The fixation of leftists like Abramson on Clarence Thomas. Thomas was confirmed, despite their best efforts, and they can never forgive that. Yes, it was a show trial, but it was Justice Clarence Thomas--not Anita Hill--who was on trial. It is Thomas, not Hill, for whom this is a lifelong embarrassment.

The attitude manifested in Abramson's recent Guardian article also shows you how unlikely it was that members of the mainstream media were ever going give Thomas a fair shake. The Independent Women's Forum (for which I have worked on and off since 1999) was founded because several politically-active women, a few of whom were close friends of Thomas, were disgusted that the women who were speaking against Thomas were being presented in the media as representative of American women. They certainly didn't represent us, which is why they decided it was time for a different sort of woman's organization. So perhaps it is not surprising that, when the ancient pot is being stirred, IWF has figured in the discussions of the HBO film.

"Confirmation: the Not So Independent Women's Forum Was Born in Defense of Thomas and the Far Right," blares the headline of a story by Lisa Graves for PRWatch, which is put out by the Center for Media and Democracy's online PRWatch. The highly partisan CMD claims on its website to have done "breakthrough investigations" on the Koch brothers and the American Legislative Exchange Council (ALEC).

From the headline, you can tell the group's definition of "independent" just might be "agrees with us." I recall being on a radio show with a particularly obnoxious woman whose views were very different from mine (she is married to a progressive senator). She asked what IWF's views on abortion were. I said we don't take a position, but added, for the sake of being honest, that I was pro-life. "Some independent organization," she sneered. If I had said we were all rabidly pro-abortion, she would have agreed that IWF is indeed composed of righteously independently-minded women. Likewise, if IWF had joined in the "high tech lynch mob" against Thomas, we would have been considered mavericks.

Barbara Spindel wrote about IWF and the Thomas hearings for Slate in an article headlined "Confirmation Bias: How 'Women for Thomas' Turned into a Conservative Powerhouse." Needless to say, we are pleased that Ms. Spindel noticed that IWF has grown and become influential. And we were amused by this: "[A]mong conservative women’s groups, the IWF was something new. If you squinted, its members—enterprising, educated professionals—looked like they could belong to the National Organization for Women. Instead, they had an extreme loathing for the feminist movement." IWF never had "an extreme loathing" for the feminist movement--indeed, Christina Hoff Sommers, author of the seminal Who Stoke Feminism, and an important friend of IWF's, doesn't loath feminism--she considers herself a feminist. But she has been a powerful critic of how the contemporary feminist movement has developed into something quite different from a quest for equal rights. There's a difference. Spindel writes that IWF "argued that second-wave feminism had solved the problem of sex discrimination." This is a caricature. We acknowledge that there remains some discrimination and we support women when this happens. But we do not believe that society is permeated by gender bias against women, and we certainly don't recommend the big government "solutions" the feminist movement does.

"After the 1994 passage of the Violence Against Women Act—spearheaded by then-Sen. Joe Biden in what was widely seen as atonement for his mishandling of the Thomas hearings—the IWF argued that the legislation should be repealed or receive zero funding," Ms. Spindel writes. She quotes Laura Ingraham, who often participated in IWF events back then, calling the Violence Against Women Act “pork” with a “tear-jerker” title. Colorful language, but I'll stick with that characterization of VAWA. There is no evidence that VAWA has reduced intimate violence (in some instances it arguably deters women from going to the police) and it does serve mainly to funnel money into a feminist bureaucracy. Next time you see men at a university parading around in high heels, supposedly to express solidarity with women, the money likely came from a campus office funded by VAWA money. And, by the way, we think laws should be enacted because they are good laws, not as "atonement" because Joe Biden didn't satisfy the mob during the Thomas hearings.

Abramson is correct that the Thomas hearings helped usher in a new consciousness about sexual harassment, and it is good that we are more vigilant about sexual assault and harassment. But that does not mean that the case against Clarence Thomas was clear-cut. Stuart Taylor, legal scholar with the Brookings Institution, had an excellent piece in the Wall Street Journal on how facts detrimental to Anita Hill (played by the beautiful Kerry Washington) were suppressed in the movie, which Taylor characterizes as a "Hollywood hit job on Justice Clarence Thomas."

Of course, the selectivity of feminist horror with anything sexually charged in the office place was brought to vivid relief during the Clinton years. Hillary Clinton has recently said that women who accuse men of sexual assault "must be heard and believed," but she didn't want such a standard applied to her husband, who enjoyed unwavering support from the entire feminist establishment, including Mrs. Clinton and Anita Hill, despite embodying a man who uses his position of power for sexual gain.

The most telling part of Abramson's piece is her comparison of the Thomas-Hill hearings to the more recent Benghazi hearings in which Mrs. Clinton testified about her part as secretary of state in the events of that night. As already quoted, Ms. Abramson sees Mrs. Clinton not as an official called to testify before a congressional committee on pertinent questions regarding the murder on her watch of four Americans, including the first U.S. ambassador killed in the line of duty in three decades, but as a "lone women," beset by "male inquisitors."

Baloney. Clinton wasn't a "lone woman--the entire Democratic caucus in Congress had rallied around her and given her support in parrying questions. Moreover, we have a right to know what the secretary of state did before, during, and after the Benghazi attack, which she publicly blamed on a video, knowing this not to be true. Abramson, by the way, recently wrote another Guardian column with the headline, "This May Shock You, Hillary Clinton Is Fundamentally Honest."

Justice Thomas has served on the Supreme Court for a quarter of a century and written hundreds of opinions. The partisans of that day, perhaps less spry but just as vicious, continue to take potshots at him whenever possible. I am honored to work for a truly independent-minded group of women who supported Thomas. It is unfortunate that the partisans of the hearings era have not been able to move on. Expect to see a lot of them as Hillary Clinton stokes these ancient hatreds this fall.

Why Fox News' Segment With a Top House Republican Was an Extreme Disappointment
Townhall
BREAKING: Merrick Garland announces he DID sign off on Trump search warrant, shames anti-FBI rhetoric, takes no questions (watch)
Twitchy
BREAKING: Merrick Garland Makes Statement on FBI Raid Against Trump
Redstate
UKRAINE WAR: Russia's Saki Air Base Blew Up and No One Knows How
PJ Media