Now, What About the 13 Hours of Hillary Clinton and Barack Obama?

Charlotte Hays
|
Posted: Jan 22, 2016 12:01 AM
Share   Tweet
The opinions expressed by columnists are their own and do not necessarily represent the views of Townhall.com. 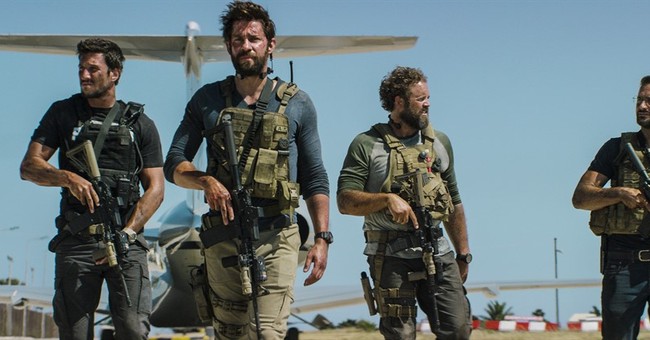 Benghazi and its aftermath in some ways exemplifies foreign policy during the Obama years: the public never get a straight answer.

That is why the new movie, "13 Hours: The Secret Soldiers of Benghazi," is so important. It answers the question the administration refuses to: What happened that night in Benghazi, Libya as Americans fought for their lives for thirteen hours against a well-coordinated attack on September 11, 2012?

Yes, it's a movie and undoubtedly includes inaccuracies and exaggeration, but I'll gladly put it up for an accuracy contest against the bogus Benghazi talking points delivered on September 15, 2012, on the Sunday morning shows by then-U.N. Ambassador Susan Rice.

The movie is based on "13 Hours: The Inside Account of What Happened," by former Boston Globe reporter Mitchell Zuckoff, who worked with five CIA security contractors who survived the attacks. Four men died that night, including U.S. Ambassador Chris Stevens, the first American ambassador to be killed in the line of duty since 1979. Kris “Tanto” Paronto, one of the surviving contractors, has vouched for the accuracy of the movie.

Directed and co-produced by action filmmaker Michael Bay of "Transformers" fame, "13 Hours" is riveting and at times almost unbearably scary. "I feel like I am in a f------ horror movie," a soldier says. I'd say it was a macho movie, given the culture of the contractors, but I went with a girlfriend and we were both entirely absorbed. The Benghazi soldiers compare themselves to the men at the Alamo, another place where help never arrived.

Hillary Clinton and Barack Obama are never mentioned, though Obama's words about the U.S. helping to topple Libyan strongman Muammar Gadaffi, and thus giving the Libyans a chance to establish democracy, are superimposed with devastating effect over footage of a country that has disintegrated into one big arms bazaar ruled by competing militias. Apparently, Colin Powell's Pottery Barn Rule (if you break it, you own it) doesn't apply to Mr. Obama and Mrs. Clinton.

One of the most effective aspects of "13 Hours" is that it does not deal with what the contractors did not know. We know from subsequent testimony before Congress that Gregory Hicks, back at the embassy in Tripoli, who became the top U.S. diplomat in Libya upon the death of Stevens, talked to the State Department that night. But we never know what kind of conversations the CIA station chief--identified in the movie only as "Bob"--might have been having with Washington. When Bob orders the contractors not to go to the diplomatic installation to try to rescue the ambassador, we don't know on whose authority he was acting. What we do know is that the soldiers were left to fight alone for thirteen long hours, with no help from their government. Some have said that a flyover by U.S. planes might have dispersed the militants and prevented the mortar attack on the CIA Annex that came late in the action and killed two men.

The action, as you probably already know, takes place at and between a diplomatic installation and a CIA Annex a few miles away. One of the most frightening scenes is when two contractors drive through the violent streets of Benghazi between the two compounds. Why would they even have tried to save Stevens with the cards so stacked against them? "You can put a price on being able to live with yourself," says one of them. That in a nutshell is the theme of the movie.

Apparently, Washington officials, one of whom wants to be our next president, suffer from fewer moral scruples. Now that we have a compelling account of the harrowing thirteen hours on the ground at Benghazi, we deserve to know about the thirteen hours of Hillary Clinton and Barack Obama. Will somebody just ask at a press conference, “What did you do that night? What time did you go to bed when Americans were fighting for their lives in a country we had supposedly liberated?”

At the end of the movie, one of the contractors notices that, even while being rescued, he will fly out in a Libyan plane. The Americans have still not come. This too says much about the true Obama foreign policy legacy, where so much of the world is wondering when, if ever, American leadership will show up. They’ll have to wait another year, at least.