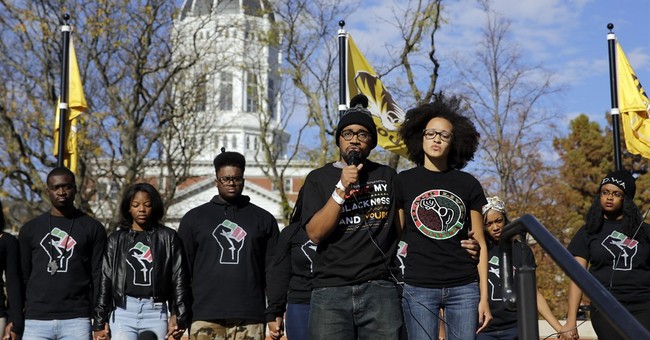 We tend to think of the students who are creating mayhem on college campuses from Mizzou to Yale as successors to the sixties campus radicals who staged campus uprisings in their day. But what a falling off.

Don't get me wrong. I am not a fan of the sixties radicals. I deplore the profound effects they have had on the nation and the academy. But--let's face it--protesting the Vietnam War is more substantive than demanding "safe spaces" where one's delicate sensibilities will not be offended. I ask you, which is the more serious demand: pull out of Vietnam or introduce a new barrage of mandatory "sensitivity" training classes?

Whereas Columbia University student radicals in 1968 rose to protest the Vietnam war and the possibility that a new gym on Morningside Heights might be segregated, Yale students of today recently erupted into campus-wide protests over the pressing matter of insensitive Halloween costumes.

Hard to believe but instead of kindly explaining to the benighted students that after eighth grade, at the very latest, one should not think too much about Halloween costumes, Yale's solicitous president Peter Salovey found himself "deeply troubled" that minority students were "in great distress" at the prospect of encountering culturally insensitive Halloween getups. Think what seeing a Pocahontas outfit could do to a young psyche. Not bloody likely of course in today's PC college environment, but you can't be too careful when fragile egos are at stake.

Whereas former student radicals spouted Marx, Fanon, and Marcuse, today's student radicals write "A Love Letter to Ourselves," published in the Oberlin Review, to explain why it would traumatize them to have American Enterprise Institute scholar Christina Hoff Sommers speak at Oberlin.

Georgetown students were, if anything, even more frightened at the prospect of having Hoff Sommers in their midst. They demanded "trigger warnings" that she might voice ideas contrary to what they believe and "safe spaces" where they could huddle together to comfort each other until the dangerous woman left the premises.

Surely, mature college professors and presidents are standing up to this kind of bullying. But other than a rare exception, you already know that they aren't. Most famously, Tim Wolfe resigned as president of the University of Missouri because he allegedly wasn't doing enough to combat racism on campus.

If there is racism on campus, the university should take action, of course, but the allegations at Mizzou seem flimsy and certainly could have been addressed with actions that fall short of a coup d'etat led by the football team, which threatened not to play if Wolfe did not resign (you know something has changed when football players have become campus radicals). Wolfe was also tarred as being a beneficiary of "white privilege," according to a handwritten missive from Concerned Student 1950, the activist group that organized the Mizzou protests. Yet isn't it interested that his "white privilege" availed him naught and he was still driven from office?

It should come as no surprise that professors and administrators kowtow to these unruly children. Nicholas and Erika Christakis, respectively the Master and Associate Master of Silliman College at Yale, found out what happens when adults on campus act like adults. After Ms. Christakis addressed an email to Silliman students critical of administration calls for costume censorship and alleging universities have "become places of censure and prohibition," students called for the couple to be fired. To their credit, forty-nine Yale faculty members have signed a letter defending Ms. Christakis, but an encounter between Nicholas Christakis and a Yale minority student, which has gone viral, tells us much, none of it good, about what contemporary college campuses are like.

The student berates Christakis (who stands politely by), by screaming, “Why the f-ck did you accept the position?! Who the f-ck hired you?! You should step down!” And then, “You’re disgusting!”

The recent college protests, with their vulgarity, ignorance, and confusion, left me pondering: Why would any parents shell out mega-bucks to send their children to these places? With most of the Western canon discredited as patriarchal or racist, what is even left to study at these places? Is a year at Yale taking women studies really worth the $45,800 tuition? One rationale for making the sacrifices required to get a college degree for children is that the degree enhances their ability to get a job and be successful. But--trigger warning--I bet employers are beginning to learn that Ivy League graduates like the young woman who berated Nicholas Christakis aren't Employee of the Year material and will hire accordingly.

The current crop of college radicals are pathetic when compared to the dangerous but intellectually dexterous radicals of the 1960s. They are the unworthy children of radicals who at least had ideas--bad ideas, but ideas all the same. The sixties generation of college protestors, who have had such horrible influence on the world, were tragic for our nation. These kids are farcical.