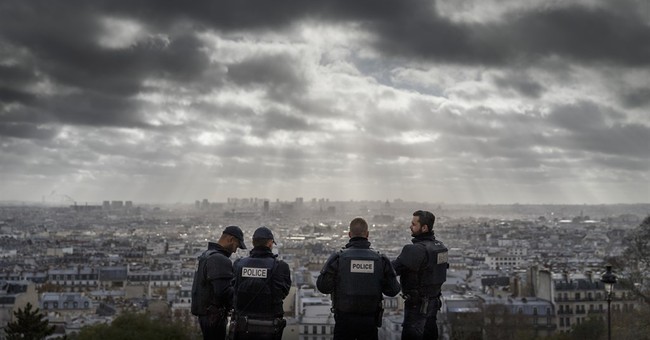 President Obama rightly hailed France as our oldest ally in his remarks immediately after the Parris terrorist attacks last week. And then he said this:

It was an attack on Western civilization and the values that have created a society too often unappreciated by its own spoiled children and loathed by Islamic jihadis. President Obama is congenitally unable to see this.

The attack in Paris is being compared to our September 11. We mourn for the suffering of the casualties and their families. But I am not persuaded of the West's ability, at this decadent point in our history, to do more than mourn. There is something defeatist and hangdog about the pictures of people squatting before those makeshift memorials that are now a feature of our society. The landmarks around the world that are lit up in France's colors seem similarly effete.

Je suis Charlie Hebdo. Nous marchons. Who are we kidding? There are some neat Paris massacre hashtags. And better yet, a man has set up his piano just outside the Bataclan theater, where more than eighty people were massacred by Islamic terrorists; he is honoring the dead by playing John Lennon's song Imagine. Imagine that.

Crowds are gathering, as the U.K. Mirror reports, adding, "The uplifting lyrics of the song and its messages of world peace and hopes for a better tomorrow have made it an anti- terrorism anthem." Imagine was sung in the wake of the Charlie Hebdo massacre, too, and contains these lyrics:

Imagine there's no heaven It's easy if you try No hell below us Above us only sky Imagine all the people Living for today...

Imagine there's no countries It isn't hard to do Nothing to kill or die for And no religion too Imagine all the people Living life in peace.

Imagine there are no Islamic terrorists. Seriously, folks, what can you expect of a civilization so decadent that it regards this kind of mush as a proper response to the slaughter of 129 people, and still counting, by Islamic radicals? John Lennon, for God's sake.

It seems to me significant that this Islamic outrage took place in the beautiful city of Paris, home to the Sorbonne, where, starting in the twelfth century, scholars helped build up our civilization, including the idea of the university. Significantly, today, universities are hubs of ignorance and of antagonism towards civilization.

Does that sound too extreme? I’d hope so, but take a look at what’s happening at schools across the country to the concepts of the free speech and scholarship, and you might decide I’m too generous. Start with the recent Columbia University protests, staged in solidarity with similar protests at Yale and the University of Missouri, that featured this chant: “I love all black people” and “I love queer black people,” and then, “I love black criminals” and then “I love black people who steal.”

The ill-educated, self-indulgent university students who are not embarrassed by such juvenile antics probably also think John Lennon's sentimental doggerel is deep. It cannot be denied that they are "living for today," as the late Beatle enjoined upon them, and it would astound me if they were able to take a stand for anything courageous or noble.

In closing, I want to mention the one American killed in the Paris attack (several others are reported injured). She was twenty-three-year-old Nohemi Gonzalez, a first generation American, who was studying in Paris. I don't know anything about her parents' coming to the United States and almost nothing about her, beyond the way she described herself in a class assignment. Here is what she said:

"I am Mexican American," she wrote, "and I also happen to be first generation born in the United States. I grew up in Whittier and had a very hard working mother that raised me to be extremely independent. If I had to describe myself in a few words I would say I am very high spirited, clean, orderly and self driven."

High-spirited, clean, orderly, self-driven, and raised to be independent. How seemingly very different from the pampered Columbia students, living for today.

Perhaps there is hope yet. Hope is a virtue, and so we must hope. I hope, but I am not necessarily counting on much in the way of a sustained defense of our civilization, though it has happened before that the West has seemed all but lost yet had the courage to survive. But living for today won't get the job done. Neither will imagining.