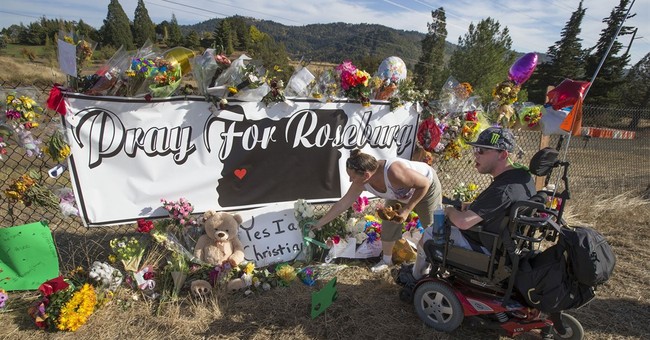 During the Civil Rights era, some in my family worried that one of my relatives, who was "excitable" and "flew off the handle" easily, might do something untoward that would cover us with shame.

This may have been unfair because this relative in question was in reality a sweet and mild-mannered man beloved of the community. Moreover, we had a cohesive family so that, if anything of an ill nature had been in the offing, I feel confident somebody would have gotten wind and stopped it. Oh, and as southerners, we had plenty of access to guns. Indeed, I've seen some mighty fine gun collections in my day.

Fortunately, nothing untoward ever did happen, but my concerns came to mind in recent days, as I’ve listen to Ian Mercer, father of the Umpqua Community College killer, who took the lives of nine people and injured nine others (I'll follow the policy of not naming him), blame guns for his son's killing spree. As CNN put it, Ian Mercer was "quick to say what he thought was to blame in the deadly college attack: Guns."

Stepping into the spotlight, Mercer didn't merely blame guns, but became something of an oracle, whose pontification on the subject were widely reported as an authority on the issue. "We talk about gun laws," Mercer lectured. "We talk about gun control. Every time something like this happens, they talk about it and nothing gets done. I'm not trying to say that that's to blame for what happened, but if [his son] had not been able to get hold of thirteen guns, this wouldn't have happened."

Unfortunately, Mr. Mercer failed to pass this philosophy on to his son, and somehow no one in his son’s family or social network was paying enough attention to intervene to prevent tragedy.

I gotta say that if my relative had stockpiled thirteen guns in his bedroom and wasn't keeping the table groaning with game and venison, somebody in the family would have said, What's up? And at least tried to assess if there was reason for real concern.

Where was Ian Mercer when his troubled son was acquiring his arsenal? That’s a topic many seem to want to avoid. The media prefers to blame the gun because progressives hate guns and gun culture so enjoy denigrating them. Guns also offer an easy, simple scapegoat rather than dwelling on the more complicated issue of the shooters’ surroundings, how the family and society failed him and at least may have contributed to the creation of a killer.

Governor Bobby Jindal was refreshingly frank in discussing why Ian Mercer appeared to have no knowledge that his son had thirteen guns. "You know why he doesn’t know?" Jindal blogged. "Because he is not, and has never been in his son’s life. He’s a complete failure as a father, he should be embarrassed to even show his face in public. He’s the problem here."

An impassioned Jindal added, "[Mercer] brags that he has never held a gun in his life and that he had no idea that his son had any guns. Why didn’t he know? Because he failed to raise his son. He should be ashamed of himself, and he owes us all an apology. When he was asked what his relationship was with his son, he said he hadn’t seen him in a while because he lived with his mother. Case Closed."

The Daily Mail reported that Mercer said he was "shocked and devastated by the news." His twenty-six year old son who appears to have had mild autism reportedly admired the Nazis and the racially-motivated Vester Flanagan who killed two young journalists in Virginia. Dad apparently didn’t know about any of this either.

Mercer feels free to lecture Americans with moral superiority about guns, but appears to have short comings in addition to just being an absent father. Citing court papers, the U.K.'s Daily Mail reports that Mercer created a hostile environment in his workplace with improper touching and sexual remarks. Mercer was quoted in court papers as having said of a customer to a coworker, "If you wouldn't stick your d*** in her, you are either gay or not a man.' " But Mercer doesn't own a gun so we can just overlook this and ignore what kind of role model he was for his son.

Most of the guys I grew up with hunted and still hunt with guns. They are upstanding citizens who support civic institutions, go to church on Sunday, and have raised sons (and daughters!) who also hunt. Because they are conscientious parents, they would notice if a son or daughter were spiraling downward. They might not be able to rescue a grown child, but they would try. That, in the past, is what families did. And it is what Ian Mercer failed to even try to do. No wonder he wants to keep the focus on guns.