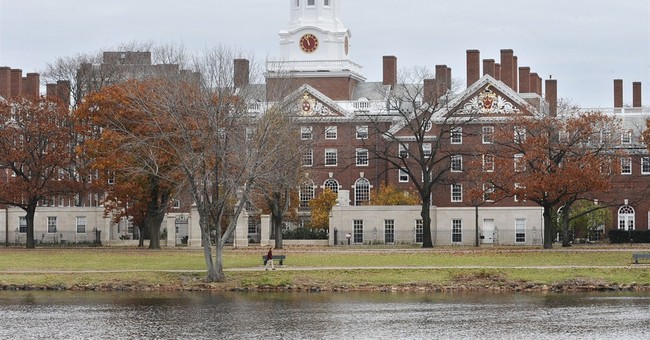 A brilliant young man has single-handedly solved the problem of college loan debt. It was a daringly simple maneuver!

Young Ronald seems to have absorbed at an early age a lesson that eludes many youths (and those who have long since left youth behind): avoid going head over heels in debt.

This is not to denigrate an Ivy League education or the great universities that have flourished in the United States since colonial times. If there is one thing I believe worth sacrificing for, it is an education. But tuition has reached such astronomical heights today that families can mortgage the house and live on bread and water, and still the sacrifice is not sufficient.

The Nelson family did not take lightly the matter of Ronald’s college choice. The Nelsons gave serious consideration to what college debt would do to the family’s finances—and to Ronald’s future.

"With people being in debt for years and years, it wasn't a burden that Ronald wanted to take on and it wasn't a burden that we wanted to deal with for a number of years after undergraduate," Ronald Nelson, Sr., an engineer at the Federal Aviation Administration, told Business Insider. “We can put that money away and spend it on his medical school, or any other graduate school." Ronald’s mother, Sandra, is in management at FedEx, which is headquartered in Memphis.

"I've had a lot of people questioning me — 'Why are you doing this?' — but after I explain my circumstances, they definitely understand where I'm coming from," Ronald Jr. told Business Insider.

Not quite everybody understands, however. An online outfit called Mic.com didn’t get it, posting a story headlined “The Student Who Got in All Eight Ivies and Didn’t Go for the Most Depressing Reason.” Mary Katharine Ham rightly noted that Mic.com seemed to regard Nelson’s choosing ‘Bama after sensible balancing of the family checkbook as “a Shakespearean tragedy.”

She perspicaciously noted further that it is just this attitude that has allowed the Ivy League schools to become prohibitively expensive: many people are willing to hock everything to go to a name brand school. And one gets the clear sense that it is the name itself—not a superior education—which people find most valuable. Surely the gifted Ronald Nelson Jr. will be able to find professors eager to impart knowledge and help him advance in his studies. People are shocked that he is giving up on having the illustrious ivy-league credential.

The President and Mrs. Obama exemplify this attitude of worshiping credentials. Indeed, it often seems that the Obamas ascribe their success not to character and hard work but to having gone to the right schools. They are at the other end of the spectrum from Ronald Nelson and his family.

This was memorably driven home to me when I covered Mrs. Obama at an event in Richmond, Va., when her husband was first a candidate for the presidency. She said something I have never forgotten: after lamenting at length her and her husband’s college loan burden, she said, "Barack and I had world-class educations" and that "otherwise we wouldn't be here." In the piece I wrote, I asked: Could the fragile Obama promise not have survived, say, a large state university?

The Obamas, unlike Ronald Nelson, certainly believe that to be the case. And, in truth, the Ivy League patina was probably essential in attracting a certain kind of supporter and ultimately voter when President Obama emerged on the national scene. But they paid dearly for the Ivy cachet: The Obamas reportedly lived with the burden of college loan debt of $120,000 until 2004, when he was elected to the U.S. Senate and paid off his debt after securing a $1.9 million book deal to write The Audacity of Hope.

This devotion to the existing tiered university system may be one reason why President Obama’s “solutions” to the college loan debt problem revolve around propping up the dysfunctional system, rather than encourage actual innovation and a more efficient educational system.

The Obama administration has sought to make it easier for some to repay their college loans by tinkering with the rules to cap student payments and forgive debt after twenty years. This is a terrible policy in transferring the costs of that expensive education to hardworking taxpayers—many of whom don’t have college degrees—and in undermining an important message to young people: You must make good on your obligations. Repaying your debts is character building. Not repaying your debts is just the opposite.

More fundamentally, President Obama encourages name brand schools to continue to be profligate. They don’t bother to cut tuition costs because they don’t have to. Students take on debt increasingly assume they will never actually have to pay up, not understanding how burdensome carrying the loan could become.

If there were more Ronald Nelsons around, the Ivies would have to find ways to cut their costs. Schools would be competing on price and developing innovative ways to efficiently deliver real value—education, usable skills, networking support and experience. We’d be seeing the kind of innovation we witness in other, competitive sectors of the economy, rather than the same horse-and-buggy whip approach to university.

Nelson’s levelheaded decision-making inspires confidence that he will be a very good physician—even if, like many other Americans, he gets his undergrad degree from a state university.