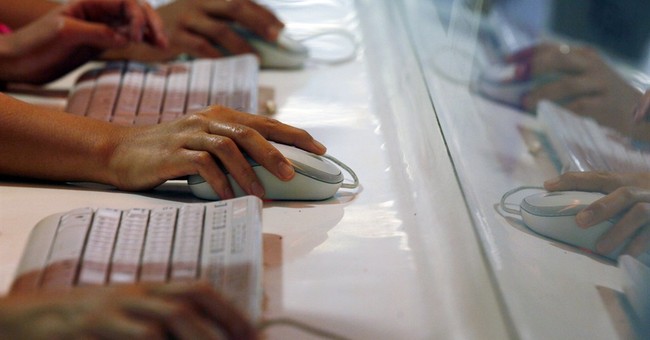 After ObamaCare turned out to be such an epic mess, a somber President Barack Obama retreated to the White House for a few days of reading and reflecting on the proper role of government.

Okay, this is a vision from an alternate universe. But you’d think that confronted with the mounting evidence of government's basic incompetence, even President Obama might have some second thoughts about assigning to government tasks that were once in the purview of individual citizens. But you would be wrong.

Indeed the final two years of the Obama administration will be devoted to enlarging government, despite the dismal record of Obama’s first six years in the White House.

Almost behind the public’s back and with little fanfare, the FCC acceded yesterday to an Obama administration demand and voted that the internet be regulated like a public utility. Pro “Net Neutrality” activists hadn’t bothered to convince the public that the FCC needed expanded power to keep the internet “open,” but Democrats have the majority on the FCC. They claimed that more industry regulation was needed, but destroying the free market which until now has driven innovation in communication and the internet was hardly a victory for the little guy. Unless you just happen to have a blind faith in government and government bureaucrats, it's hard to see the upside in allowing the federal government to throw its suffocating embrace over the heretofore-dynamic internet.

The primary justification for allowing the FCC to treat internet providers as a sluggish public utility was that government needs to prevent companies from prioritizing some content and creating “fast lanes” for those willing and able to pay. Yet the FCC's power grab creates the potential for much greater government intrusion than preventing these arrangements: The FCC will now have the discretion to micromanage pricing and other business practices, and could create a new layer of government fees and taxes. Internet providers won't immediately know the new rules that will govern their companies' operations, and therefore will have reason to step back on infrastructure investment, since it is far hard to see how they might turn a profit.

While the FCC decision was still in the future, Senator Mike Lee posed the right question: “Who do you want in charge of the direction of the Internet: people at dot-com startups that brought us game changing companies like Facebook, Google, Twitter, Amazon and Uber; or nameless, faceless, unelected bureaucrats in our nation’s capital?”

For President Obama and his ilk the answer is easy: nameless, faceless, unelected bureaucrats! The Left won't trust that the market—which responds to individual decisions from the likes of you and me—could find a solution to some providers creating content prioritizing relationship. No, they think a few folks in Washington D.C. know best and ought to make sweeping new rules that empower bureaucrats and create unreadable tomes of regulation that allow no deviation or innovation.

And if you’re one of the nameless and faceless who will be put in charge, odds are you won’t be held responsible for any failures you make, no matter how much inconvenience (or worse) they cause for others. Indeed, when bureaucrats stumble, their failures seem barely register with their admirers in the Obama administration.

For example, bureaucrats at the Department of Health and Human Services recently messed up and sent the wrong tax forms to about 800,000 people. The error related to ObamaCare subsidies, which are complicated enough if taxpayers receive the correct forms. How did the Obama administration respond to this epic bureaucratic screw-up?

White House spokesman Josh Earnest brushed it aside, indicated that “less than 1 percent of people who file taxes” were affected by the glitch. Here's how someone other than the paid White House spokesman might have put it: What the bloody hell! You mean these blankety-blank bureaucrats made a mistake so humongous that that it affects a full one percent of this great nation’s taxpayers? But that is hardly something you care to acknowledge if you are working every day to make the federal bureaucracy even more powerful and more cumbersome.

The Left's tremendous trust put in an elite bureaucracy is coupled with ignorance of the non-governmental work place and a complete lack of trust in free people to make rational decisions on their own and for our civil society to give people the chance to exercise their preferences.

White House Dossier’s Keith Koffler detected this bias in the statements made by Secretary of Labor, Tom Perez, on MSNBC’s Morning Joe show. “We need a raise in the minimum wage because you shouldn’t have to win the boss lottery to be able to live a decent life,” Perez said.

“Think about the mindset here,” writes Koffler. “The boss lottery? Luck is the defining factor of success? Your fate, people, is out of your hands. If you get lucky and you have a good boss, you might get paid okay.” So the Secretary of Labor (!), it seems, has no idea what factors other than luck might determine somebody’s pay.

He cannot trust that you and your boss might be able to hammer out a sensible agreement on your own, and that if you don't like that job offer, that you could go look for employment elsewhere. He cannot trust that businesses know how much they can afford to pay someone to perform a given job, and that forcing them to pay more might just mean they don't create a job at all. Yes our Secretary of Labor appears not to understand at all how the labor market works, but still is rather confident that government—i.e., people like himself—should have more say over any employment contract you might consider.

I came across a remarkable quote over the weekend. It was from a history of the Smithsonian, but what struck me was what it said about the nature of the relationship between citizens and their government in the year 1846. “Most Americans,” it noted, “had no contact whatsoever with the federal government, except through the postal service.” Leaving aside that the postal service, as is all too often the fate of government entities, has become a disaster zone, the observation captures an important truth about a burgeoning nation that in twenty years would survive a civil war and in a century would become, for a while, the greatest nation on earth.

Government was a modest player in the development of our country's economy and great strength. To borrow a phrase from President Obama, the citizens built it themselves. They built the businesses that made this nation rich by themselves—largely unimpeded until the 1930s and even more so now by a rapacious federal government that usurps functions best left in our hands. If we are ever to return to prosperity, the government is going to have to get out of the way and let the people, in their hit and miss way, reclaim vibrancy and prosperity – and freedom.