The World Is My Selfie 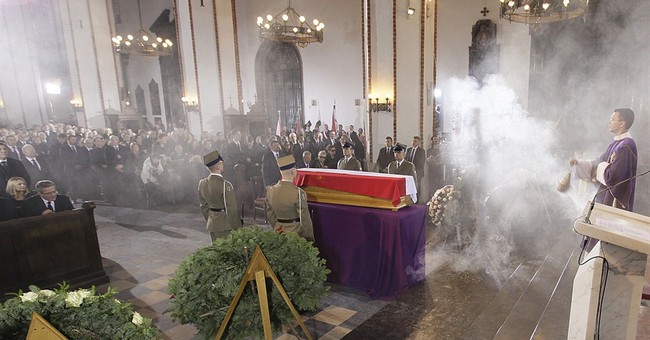 Geraldo Rivera’s infamous selfie—that’s a picture that one takes of themselves for those not up on the current lingo—revealed the nearly-nude 70-year-old celebrity looking lovingly into a bathroom mirror and should have been the ultimate herald that the end times are fast-approaching.

But civilization has since taken a turn for the worse. Yes, there are some things worse even than seeing Geraldo’s buff but aging torso. There’s the new trend, the funeral selfies, which acculturated blogger Melissa Langsam Braunstine termed “a new societal nadir.” Funeral selfies are when an attendant snaps a photo of him or herself, usually on a phone or another handheld electronic device, to capture their participation in the ceremony.

Move over ugly tattoos, which are meant to say “year of the pig” in Chinese but actually say, “I am a pig.” This is far more tasteless.

In noting the trend, CNBC quoted the caption of a selfie taken by a young woman dressed in black: "Love my hair today. Hate why I'm dressed up #funeral." A selfie featuring a pouty young woman in a pink bedroom displays a sign reading, "Keep Calm and Rock On" and bears the caption "depressing funeral selfie."

"My friend took a selfie at a funeral and didn’t realize his dead grandma was in the background," one tweeter ruefully observes, adding--in a rare display of good taste--"I can’t breathe.”

Well, neither could grandma, but surely the old girl didn’t deserve such a selfie-absorbed grandson.

I am kicking myself that I didn’t know about the funeral selfie before I sat down to write my new book When Did White Trash Become the New Normal: A Southern Lady Asks the Impertinent Question. The funeral selfie says everything that needs to be said about a lazy, self-centered society in decline. Why give grandma a passing farewell thought when you can pose for a picture of…your selfie?

We live in a society in which children are taught vanity in school—of course, we call it self-esteem, but that is just a euphemism for vanity, one of the classic vices. In the past, religion taught us not to be quite so self-centered. In my book, I keep promising to get to the God part of religion. But I never really do. I concentrate instead on religion as a civilizing force. I’m all for going to church to worship. But, frankly, I’m also for going to church—and taking your children there—to keep some basic, not selfie-customs alive.

If you believe, as I most certainly do, that religion long had an important role in civilizing us beastly human beings, you—like me—were dismayed to read the Washington Post’s approving profile of the Rev. Nadia Bolz-Weber, a Lutheran minister who looks like a tattooed, female biker in a sleeveless clerical shirt and tight jeans. Oh, and the reverend is “foul-mouthed,” as approvingly noted in the headline.

“She’s a tatted-up, foul-mouthed champion to people sick of being belittled as not Christian enough for the right or too Jesus-y for the left,” the Post reports. Fair enough. The reverend Bolz-Weber actually has some interesting and surprisingly traditional things to say—she asserts that God wants us to know Him. But I’m afraid she also comes across as just a bit of an exhibitionist. Selfie-absorbed, if you will.

Unlike the Rev. Bolz-Weber, who is positively dismayed that well-dressed people have begun to attend her services, most religious leaders in the past saw themselves as agents of civilization, not people storming the barricades. Churches and synagogues afforded an informal education about our history. If you belonged to a traditional church, you probably learned who Charlemagne was, and you could identify the figures in Renaissance art. That’s no longer the case. Camille Paglia, an atheist art historian who nevertheless has an appreciation for the beauty engendered by “organized religion,” has taught students who can’t quite place Adam and Eve or Moses. “If you are an artist and don’t recognize the name of Moses,” Paglia told Emily Esfahani Smith, “then the West is dead. It’s over. It has committed suicide.”

Are we to celebrate this suicide? Too much of our culture, self-absorbed as they are, seem willing to disregard the civilization that has laid the groundwork for their all-too frivolous existence. The irony is that the first victims of culture vacuum sucking the soul from the Western world will be those who celebrate its demise.