Boston Strong: Behind the Bluster 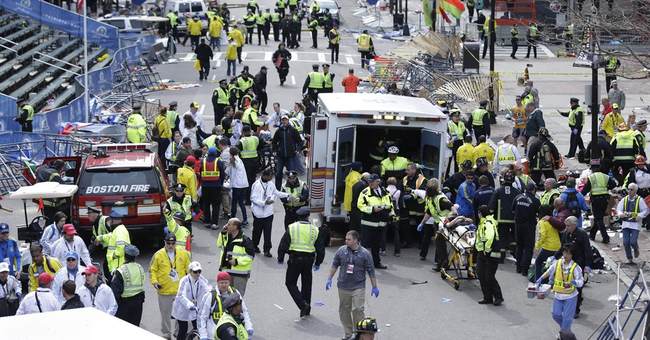 After the April 15 terrorist bombing in Boston, T-shirts bearing the slogan “Boston Strong—Wrong City to Mess With” began sprouting all over the city as a way of raising beleaguered spirits.

One of the things that struck me immediately after the bombings was that Boston might be just the right city to mess with. It is a liberal city that is likely to give budding terrorists all sorts of opportunities such as scholarships and welfare. Boston is also likely to have a hard time grappling with the reality of Islamic terrorism after the fact.

And so what does happen if you do mess with Boston by pulling off the most sickening terrorist attack on American soil since September 11, 2001? For starters, a magistrate judge will pop into your hospital room to halt interrogation by FBI agents by reading you your Miranda Rights. Hush, hush, sweet terrorist.

Many of us struggle with seeking and giving forgiveness. But, if you mess with Boston, killing four and maiming scores, a Jesuit priest will offer you public absolution via the trendy Huffington Post before a single one of your victims has taken a first halting step on new prosthetic legs. “I can't hate you because I remember being 19," writes the Reverend Father Michael Rogers, S.J., on the Huffington Post. "[When I was 19] I thought many things were a good idea which weren't." Sounds like mighty interesting teen years for a Jebbie, no?

Oh, and here’s the scariest part—if you mess with Boston with pressure cooker bombs filled with lethal nails, the city will sing at you. Neil Diamond will sing “Sweet Caroline” at Fenway Park, and “Boston Strong,” a new song, will be a hit on iTunes. "Our hope is that the song will not only help the city of Boston heal, but will send a broader message that terrorism in the long run will not and cannot win," “pianist and 9/11 first responder” Jaime Hazan said of the song to the Wall Street Journal.

But terrorism can win, and the song sends no such message. Not even Circe could sing away terrorism. There was true courage on the scene of the Marathon bombing, with Americans, as is their wont, rushing to help others at peril to life and limb. The quiet dignity in the message to the public from Bill Richard, whose “dear son” Martin, 8, died in the attacks, and whose wife and daughter, 6, were grievously injured, was a testament to human decency in the face of intolerable suffering. It was in marked contrast to so much of the bravado and chest thumping employed to pretend that Boston in defeat is really Boston Strong.

Perhaps the worst example was Vice President Joe Biden’s speech at the memorial service for slain MIT policeman Sean Collier, 27. No surprise, it was a masterpiece of bombastic denial. He referred to the bombers as “knock off jihadis,” which apparently is the state of the art term for two supremely successful terrorists who destroyed lives on a bright day in Boston. Like virtually everybody who has spoken in the aftermath of the bombings, the vice president didn’t entertain the notion that the terrorists might…win.

Although I argue that the Boston Strong rhetoric is a way of cloaking our fear, Biden asserted that we have not yielded to fear, weakened our constitutional protections (some might beg to differ), or closed our borders in response to terrorism. About those borders, Mr. Vice President, we don’t want to close them, Sir, but it might be a good idea in the future to stop people like Tamerlan Tsarnaev at the border. It is worth noting here that, according to a federal law enforcement official who spoke to Fox News, the student from Kazakhstan who was arrested in connection with the bombings had re-entered the United States without a valid student visa. So maybe a few changes at the border wouldn’t be such a bad idea, Mr. Biden.

"Whether it’s al-Qaida central out of the FATA [Federally Administered Tribal Areas] or two twisted, perverted, cowardly, knockoff jihadis here in Boston, why do they do what they do?” the anguished vice president asked. I could tell him, but I’d have to use the I-word.

So odious is facing the truth about Islamic terrorism that Department of Justice training material, according to Rep. Michele Bachmann, has removed references to Islamic terrorism. Could that be how the FBI and Homeland Security let Tamerlan Tsarnaev slip past them? After all, without the Islamic connection, he is just a thuggish guy living off the American taxpayer, no need to send him packing.

We can’t save ourselves by refusing to face reality and calling the terrorist dirty words—“cowardly” is a favorite epithet for these fierce killers who risk everything to destroy us—and pretending that somehow we’ll win merely because we tell ourselves we will win. Winston Churchill didn’t save England by saying that Hitler was a knock-off fuhrer.

On the eve of the Battle of Britain in 1940, Churchill, in a speech quite different from Biden’s oration at Sean Collier’s memorial, said this: "I expect that the Battle of Britain is about to begin. Upon this battle depends the survival of Christian civilization. Upon it depends our own British life, and the long continuity of our institutions and our Empire. The whole fury and might of the enemy must very soon be turned on us.”

One of the real heroes of this horror is Jeff Bauman Jr. Even as he was being wheeled into the hospital with his legs blown off, Bauman was giving authorities information to help them identify Tamerlan Tsarnaev. In a weary interview, Bauman said he still has “much to live for” but admitted he is “pissed.” Thank Heaven—somebody in Boston with the courage to be pissed.