Biden Is Playing for the Midterms Instead of the American Economy

Charles Sauer
|
Posted: Mar 09, 2022 12:01 AM
Share   Tweet
The opinions expressed by columnists are their own and do not necessarily represent the views of Townhall.com. 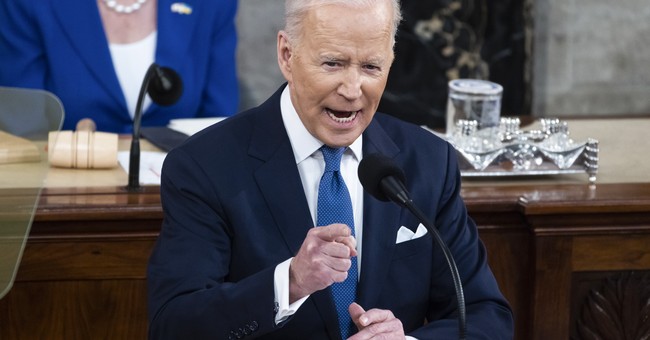 When the international community slapped sanctions on Putin’s Russia, many people cheered. Bad things were going to start happening to a bad country.

However, with rampant inflation and a domestic energy sector that had already been attacked by the reckless Biden Administration, the effect on the American economy is likely going to be harmful as well. Now, in defense of the Ukrainian people and greater stability in the world, that harm might be worth it, but the pain that we are all about to experience didn’t have to be this bad. And, looking around at the rest of the Biden agenda – he seems to be using the same playbook and making many similar mistakes.

The public policies that the President announced at Tuesday’s State of the Union will slow innovation and investment – which means that responding to the next emergency will be even harder.

When COVID-19 was unleashed, a vaccine was developed in days. That development is thanks to the fact that in the U.S. we enjoy a robust, competitive research and development economy with strong rule of law to protect innovators. In fact, not just one vaccine was developed, but multiple vaccines. This wasn’t an accident, the founders of our great country understood the benefits of an innovative society – including patents as the only explicit right in the Constitution, and inventors and innovators are an important piece of nation’s history.

The reason for this competitive market comes down to two factors. First, we have patents in the US which entitle the inventor of a new “thing,” in this case a new drug, the exclusive right to that invention for 20 years. Second, the companies that produce these drugs are allowed to price their new drugs and sell them to willing and thankful buyers.

However, in the President’s State of the Union, and other speeches that he has given around the country, the President has called for setting the prices of drugs – like insulin. This idea sounds good on its face for winning short-term political points, but it undercuts the two principles that have made the US the innovative economy that it is by lowering the value of patents – and restricting the ability of pharmaceutical companies to profit.

It isn’t just big pharmaceutical companies; this change also harms the small inventor. When the large companies can’t be assured of profits from big breakthroughs, they are less likely to buy innovations from smaller innovators.

That would be bad enough, but the administration and Congress are also attacking Standard Essential Patent (SEPs) that represent the backbone of much of the technology that we use every day – and attacking the biggest businesses in our country by attempting to limit their ability to acquire new and even more innovative companies.

These attacks are based on superficial populist thinking, but their long-run effects will not be popular or effective.

If large platforms are not able to purchase — or even just discouraged from buying — new and innovative companies, these large behemoths are left with two options. First, they can wither on the vine as newer and more innovative companies surpass them. Second, they can just steal the innovations and rely on their robust legal departments to defend them – which with changes made over the past two decades is easier and more attractive than it's ever been.

And the small innovative companies that they buy are left with two of their own options: 1) play it safe and invest in their money (likely in the big companies) instead of risking their family’s security or 2) go ahead and risk everything they have, even though their odds of succeeding were just dramatically reduced. The goal of every small business owner is to create the next big thing, but the road to success is hard. About 90 percent of startups fail, yet because of the potential upsides they persist. Some companies become unicorns – one of the 475 companies worth a combined $1.4 trillion – but most will find another company that is willing to buy what the entrepreneur has built.

President Biden said that he supported innovation in his State of the Union address. He said that he doesn’t want sanctions on Russia to hurt the U.S. economy. Both of those are good statements – but actions speak louder than words. While the President seems to advocating for policies to help innovators – one of the most important things that can do is stop getting in their way.

That might not win him and his party the midterms – but it would make him a good President and a good leader.