Charles Sauer
|
Posted: Mar 27, 2021 12:01 AM
Share   Tweet
The opinions expressed by columnists are their own and do not necessarily represent the views of Townhall.com. 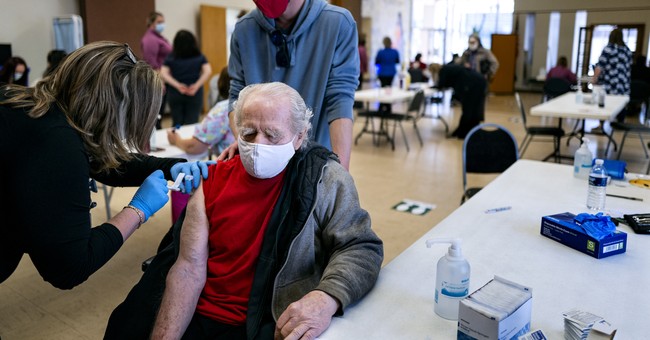 You can’t force a horse to drink water, and at least we shouldn’t talk about forcing people to get vaccines, but the horse should drink and everyone should get a vaccine. Vaccines have saved countless lives and increasingly enable our urban lifestyles by reducing or nearly wiping out spreadable diseases. Things like Polio, mumps, and smallpox have been nearly eradicated and if they were to pop up someplace, we are largely safe from a widespread pandemic from them because of vaccines. However, despite the history and the present evidence of their effectiveness – there is a large cohort of individuals that are still reluctant to take a vaccine.

In some ways – this is understandable if someone hasn’t done any research.

Jenny McCarthy’s crusade against vaccines was based on the inclusion of a preservative in many vaccines at the time – Thimerosal. Her contention, and her follower’s reasoning, was that Thimerosal caused autism. It didn’t – and doesn’t – and study after study after study proved that, but her crusade led many kids to be left unvaccinated and therefore some of those to come down with perfectly preventable illnesses.

One of the points of “Proof” they Jenny and her army put forward was a seeming correlation between vaccines and autism, but anyone that has taken a statistics class understands the problems with correlations. For instance, it appears that whenever Nicholas Cage is in a movie – that drownings in a pool increase. Now, if someone can prove that Cage’s appearances and the drownings are causal – and directly causal to Nicholas Cage – then maybe we should try to talk to him about not appearing in any more movies. But, we know that it just isn’t causal and just happens to an interesting and morbid correlational coincidence.

The same goes for people that think “injecting toxins” into their body is a problem – the science just doesn’t support this. There are lots of good things that we can inject into our bodies – and lots of things that we put into our bodies by choice that probably aren’t so good. Between the air that we breathe, the detergents that we use, the processing of the foods we eat, and even the additives in the water that we drink, this objection doesn’t hold up either. The “Chemicals” that are being injected are like good germs vs bad germs. Yes, there are plenty of bacteria in the world that are bad for you, but there are many that are good for you too. In fact, we likely have more bacteria living inside of us than we do cells. So, on a population basis we are more bacteria than ourselves.

What is being injected is a tool that our bodies can use to fight whatever disease the vaccine was intended for. For instance, the Pfizer vaccine basically has messenger RNA, sugar, and salt. The RNA is there to give your body the instructions it needs to fight COVID-19 and the rest is there to transport it and make it injectable. I have had glasses of water with worse ingredients.

And lastly, there are those that are worried that the science was hurried. This is an interesting category because when we look at those that aren’t taking the vaccine there are more Trump supporters than Democrats that are currently refusing to take the vaccine – so either there are more Trump supporters that also believe Jenny McCarthy or while they supported Trump they didn’t actually believe him. Either way, they would be wrong when looking at this vaccine. While this vaccine was allowed to reach market sooner than some other vaccines, it was actually developed in early 2020 almost right after the pandemic was discovered. The time in between – almost a year – was spent testing to make sure that what was known scientifically was also true in practice. Furthermore, the research for an RNA vaccine had actually been going on for a longtime before the pandemic, and was a mature research area. The idea of the vaccine wasn’t novel, it was just this specific application, fighting COVID-19, that was novel.

For my family this isn’t an issue, we are vaccinated or plan to be vaccinated. And, I don’t truly care what your family decides. However, please don’t make a decision for you, your spouse, or your kids based on bad information, prior issues, or fear. Do your research. I am confident that it will lead to getting the vaccine – making sure that you and your family are safe and help the rest of use get back to normal faster – as well as not pay your hospital bills if you get sick.

Charles Sauer (@CharlesSauer) is an author and a contributor to many publicatation. He is the president of the Market Institute and previously worked on Capitol Hill, for a governor, and for an academic think tank.