The Dollar Is So Strong It's Hurting The Stock Market

Charles Payne
|
Posted: Mar 08, 2019 9:44 AM
Share   Tweet
The opinions expressed by columnists are their own and do not necessarily represent the views of Townhall.com. 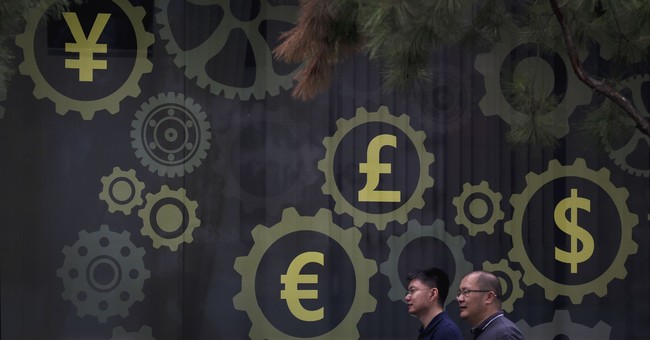 It was another rough outing for the stock market on Thursday, which continues to struggle in finding traction. For the second consecutive session, a potential spark or catalyst (only temporarily) moved the needle positively. Yesterday, we got accommodative European Central Bank (ECB) news. On Tuesday, there was a stronger-than-expected report from the Institute for Supply Management (ISM) Non-manufacturing Index.

Meanwhile, market breadth continues to deteriorate as selling begets selling. While the hands were strong a week ago, they are spying the exits, and some are bolting.  The declining volume is swamping the down volume by 150% on the NYSE, and 109% on the NASDAQ. However, the biggest red flag is the mounting number of stocks closing at new 52-week lows, which exceed new highs on the NASDAQ.

The U.S. dollar (DXY) continues to gain strength, partly as a default over the persistent global slowdown, and it’s taking a toll on the stock market.

The DXY is back to key resistance that goes back to June 2017. It was tested last November. The DXY measures the U.S. dollar against a basket of six currencies, and has been up in all cases:

The dollar must come down from these levels. For all the media focus on headline stuff like the US-China trade negotiations, the dollar - coupled with weaker global economies - will have a larger impact on the earnings potential of multinational corporations.

Yesterday, the S&P 500 treaded around its 200-day moving average, creating additional tension for investors. While there could be some automatic selling based on this, I think the bigger downside test comes around 2,700.

China exports dropped 21% on a weak economy and due to US tariffs.

Shanghai and Shenzhen stocks fall nearly 4% as the data heightened concerns on the trade dispute.

China reported its steepest year-on-year decline in exports in three years on Friday, the latest sign that a global slowdown and Beijing’s trade dispute with the US are hurting the world’s second-largest economy.

Exports sank 20.7 per cent last month compared with February 2018 in US dollar terms, the biggest monthly fall since February 2016, and it is four times steeper than the 4.8 per cent decline forecasted in a Reuters poll of economists.

Imports fell 5.2 per cent, compared with a forecast drop of 1.4 per cent, revealing the smallest trade surplus for China in 11 months.

We asked subscribers to take profits on positions in Materials, Industrials, and Consumer Staples. The moves were not indictments on the companies or sectors. However, we realized they were stalled and more vulnerable than we’d like in a larger market pullback. On that note, everyone should have greater cash positions.

Futures were under pressure before the jobs report was released and have taken a leg lower on the disappointing numbers.  February added 20,000 jobs, well below consensus.  January (311,000) and December (227,000) were revised higher, up 7k and 5k, respectively.  The unemployment rate was down to 3.8%, but this was due in large part to the people coming back to work after the government shutdown.  The Labor Force Participation rate was flat at 63.2.  Construction jobs were down 30,000 and Leisure and Hospitality was flat.  This could be due in large part to the terrible bad weather/snow storms.