China Tariffs In The Real World

Charles Payne
|
Posted: Dec 04, 2018 10:30 AM
Share   Tweet
The opinions expressed by columnists are their own and do not necessarily represent the views of Townhall.com. 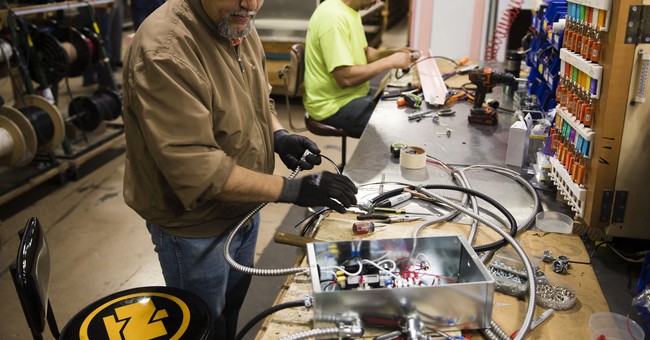 It was another solid session, that saw a continued improvement on breadth.

Other positive sign was Nexstar Media (NXST) shares surging 7% after the company announced a takeover for Tribune Media at a 60% premium.

Another reason the street was right to celebrate the trade truce is the current 10% tariff isn’t a major impediment to most American businesses, even those that source from China.

RH (RH) blew away financial consensus beating on top and bottom line as operating margin expanded to 10.3% from 8.1%.

We spent years imagining a model that reflects the qualities and characteristics of three businesses we study and greatly admire: LVMH, Apple, and Berkshire Hathaway. I thought it would be helpful to describe how we have integrated relevant aspects of each with our own unique vision for RH to create a model that we believe will redefine what was previously thought possible in our industry.

Like LVMH, we are building a luxury platform, and in a similar fashion, we are beginning to demonstrate that we too can be rewarded with luxury brand margins that are double those of competitors targeting broader markets.

Additionally we can learn from LVMH’s success building iconic global brands, as 75% of their revenues is outside of the United States. We also believe that building a luxury brand is extremely difficult, requiring decades of effort and a discerning level of taste which is generally absent in businesses of scale.

Similar to Apple, we are designing a seamlessly integrated ecosystem of businesses that all amplify and render our brand, and each other more valuable - where the whole becomes more valuable than the parts.

Akin to Berkshire Hathaway, we are building a business that is capital efficient, generates significant free cash flow, enjoys a low cost of capital, and is developing a culture relentlessly focused on ROIC and capital allocation. Also like Berkshire, we invest with a long-term view, indifferent to short term market swings or recessions.

We believe the model we are building will result in RH leapfrogging far past comparable companies, and create the kind of separation in our industry that only brands like Apple, Nike, LVMH, Berkshire, and a few others have enjoyed in theirs.

All sectors, except healthcare, were higher, with technology leading the way on a strong performance in computer chip names and a big move in Apple (AAPL).  After the close, however, Cirrus Logic (CRUS) became the latest Apple supplier to post disappointing earnings results.  This morning Apple caught yet another share price downgrade.

I think almost every Wall Street firm has downgraded the stock, which is great news because at some point the stock will begin a big rebound and one by one all these same firms will upgrade the stock – the cycle never stops, it’s called behavioral analysis.

Today, Apple will weigh on a market that’s ripe for short term profit-taking.

The 2- and 10-Year U.S. Treasury yields continues to move toward inversion, which many say were harbingers for the last seven recessions.  The recessions happened as much as 18 months later, but still this is the worry of the day.   It’s worth watching, but doesn’t supersede fundamentals.