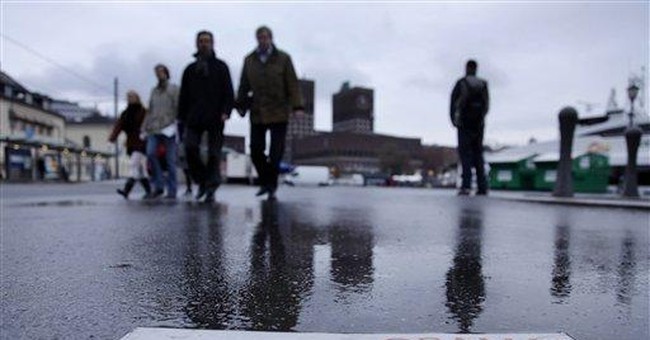 WASHINGTON -- In the 1970s and early '80s, having seized control of the U.N. apparatus (by power of numbers), Third World countries decided to cash in. OPEC was pulling off the greatest wealth transfer from rich to poor in history. Why not them? So in grand U.N. declarations and conferences, they began calling for a "New International Economic Order." The NIEO's essential demand was simple: to transfer fantastic chunks of wealth from the industrialized West to the Third World.

On what grounds? In the name of equality -- wealth redistribution via global socialism -- with a dose of post-colonial reparations thrown in.

The idea of essentially taxing hard-working citizens of the democracies in order to fill the treasuries of Third World kleptocracies went nowhere, thanks mainly to Ronald Reagan and Margaret Thatcher (and the debt crisis of the early '80s). They put a stake through the enterprise.

But such dreams never die. The raid on the Western treasuries is on again, but today with a new rationale to fit current ideological fashion. With socialism dead, the gigantic heist is now proposed as a sacred service of the newest religion: environmentalism.

One of the major goals of the Copenhagen climate summit is another NIEO shakedown: the transfer of hundreds of billions from the industrial West to the Third World to save the planet by, for example, planting green industries in the tristes tropiques.

Politically it's an idea of genius, engaging at once every left-wing erogenous zone: rich man's guilt, post-colonial guilt, environmental guilt. But the idea of shaking down the industrial democracies in the name of the environment thrives not just in the refined internationalist precincts of Copenhagen. It thrives on the national scale too.

On the day Copenhagen opened, the U.S. Environmental Protection Agency claimed jurisdiction over the regulation of carbon emissions by declaring them an "endangerment" to human health.

Since we operate an overwhelmingly carbon-based economy, the EPA will be regulating practically everything. No institution that emits more than 250 tons of CO2 a year will fall outside EPA control. This means over a million building complexes, hospitals, plants, schools, businesses and similar enterprises. (The EPA proposes regulating emissions only above 25,000 tons, but it has no such authority.) Not since the creation of the Internal Revenue Service has a federal agency been given more intrusive power over every aspect of economic life.

This naked assertion of vast executive power in the name of the environment is the perfect fulfillment of the prediction of Czech President (and economist) Vaclav Klaus that environmentalism is becoming the new socialism, i.e., the totemic ideal in the name of which government seizes the commanding heights of the economy and society.

Socialism having failed so spectacularly, the left was adrift until it struck upon a brilliant gambit: metamorphosis from red to green. The cultural elites went straight from the memorial service for socialism to the altar of the environment. The objective is the same: highly centralized power given to the best and the brightest, the new class of experts, managers and technocrats. This time, however, the alleged justification is not abolishing oppression and inequality but saving the planet.

Not everyone is pleased with the coming New Carbon-Free International Order. When the Obama administration signaled (in a gesture to Copenhagen) a U.S. commitment to major cuts in carbon emissions, Democratic Sen. Jim Webb wrote the president protesting that he lacks the authority to do so unilaterally. That requires congressional concurrence by legislation or treaty.

With the Senate blocking President Obama's cap-and-trade carbon legislation, the EPA coup d'etat served as the administration's loud response to Webb: The hell we can't. With this EPA "endangerment" finding, we can do as we wish with carbon. Either the Senate passes cap-and-trade, or the EPA will impose even more draconian measures: all cap, no trade.

Forget for a moment the economic effects of severe carbon chastity. There's the matter of constitutional decency. If you want to revolutionize society -- as will drastic carbon regulation and taxation in an energy economy that is 85 percent carbon-based -- you do it through Congress reflecting popular will. Not by administrative fiat of EPA bureaucrats.

Congress should not just resist this executive overreaching, but trump it: Amend existing clean air laws and restore their original intent by excluding CO2 from EPA control and reserving that power for Congress and future legislation.

Do it now. Do it soon. Because Big Brother isn't lurking in CIA cloak. He's knocking on your door, smiling under an EPA cap.