Can Sanders Take the Oath? 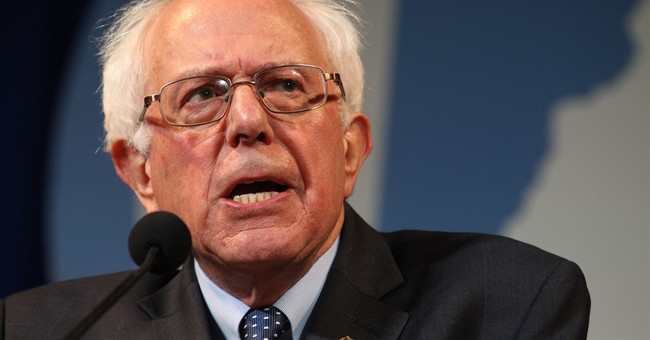 I intend the title question as a genuine one; perhaps Bernie Sanders could in good faith take the oath of office to be President, which requires that he swear to “preserve, protect and defend the Constitution of the United States.” After all, the oath he has already sworn multiple times as a Congressman and Senator to “support and defend the Constitution” against its enemies is a quite similar duty (although it may be the additional and unconditional obligation to “preserve” our Constitution a President undertakes requires greater adherence to the Constitution as it is, rather than how one might wish it be). But Sanders’ capacity to take a presidential oath seems to me problematic, and within it are the questions that have bedeviled Democrats since Sanders announced his candidacy, i.e., what the distinction between a “socialist” and a Democrat really amounts to, and whether that distinction is one of degree only or is a difference in kind.

The short answer to my question, of course, is that Senator Sanders takes, I feel safe in surmising, a quite different and looser approach to constitutional interpretation than I would feel comfortable doing, and so has found himself capable of supporting the Constitution, as he interprets it. So the more precise question, one we usually ask before appointing federal judges, but too rarely before electing members of the political branches, is how Sen. Sanders interprets our founding documents, and whether his method of interpretation, which apparently gets past the clear intent that our national government be one of limited and enumerated powers, is a plausible one.

As the President likes to say, let me be clear: weakening, undermining, and finding a way to get around a document does not comport with preserving, protecting and defending it, and it is Newspeak to maintain otherwise. To be specific, systematically making the words of the Constitution have less meaning, and reducing their legal significance and capacity to bind, is in my view wholly inconsistent with either the congressional and particularly the presidential oaths of office. Reasonable people can have substantially different approaches to what constitutional words and structure mean – but that these not be robbed of meaning is a requirement, and if a candidate’s interpretive theory does this, it should be revealed as doing so, and it will be up to the electorate to decide if the Constitution still means something to them.

A qualitative political difference between Sanders’ socialism and Democratic Party ideology would exist if it turned out to be much harder to square socialism with our constitutional structure; that is, if it turned out to require a more bizarre and implausible way of reading (in the public mind) a binding legal document. I do not know definitively if this is the case – but the answer seems an important one. So the other Democrats should also be asked about how they view the Constitution they would swear to preserve, and in a comparison of their responses we might discover whether socialism is somehow less consistent with the oath than is simply being a big government liberal Democrat.

The Constitution arose from a matrix of Enlightenment rationalism, and institutionalizes the classical liberal political theory of individual rights, republican citizenship, and representation of governments, sovereign by default except where specified, within a federal structure. Its compromises with the Southern planter interest were mostly corrected in the Reconstruction amendments, reflecting the thought of the early Republican Party, which strengthened the emphasis on individual liberty, but also the federal role as guarantor of that liberty. As National Review's Charles Cooke recently discussed, it was false for Sanders to claim in his speech to Liberty University that the principles of the Constitution were founded on slavery, and to thereby imply an illegitimacy to the fundamental document, and it is doubly false when we recognize that the chief proponents of abolition had a hand in rectifying the original accommodation with slavery.

Even this capsule treatment of the Constitution tells us it would be inconsistent with our charter to elevate “the State” or collective interest of the nation over that of individual human beings, so that some high level of socialism (the one-party communism of China or Cuba) could not in good faith be held to preserve the document generally, quite apart from the violations of specific provisions this would entail. It would be likewise inconsistent to wholly absorb the functions and sovereignty of the constituent states, for example by appointing governors or dictating state and local budgets. Whether a self-proclaimed "democratic socialist" who refuses to endorse capitalism, and who appears intent on substantially growing the power of the central government, can reconcile to the Constitution as normally understood is an open question, and depends ultimately on how far he would be willing to go. Sanders’ upcoming speech explaining his ideology would be an excellent occasion for him to clarify this point.

Back in 1987, when Sanders was the socialist mayor of Burlington, he pointed to the lack of "economic rights" as a "weakness" in the constitutional design (i.e. there being no unconditional federal guarantees to every person of a standard of housing, income, and medical care). Accepting the absence of these shows intellectual honesty, but under the oath, one must also agree not to allow them somehow to be interpolated into the text, and moreover, to affirm that their absence does not make the provisions that do exist any less worthy of respect and enforcement. An honest socialist might go that far, but what might be harder for him to accept is that federal economic rights are absent for a good reason. If such standards are to exist at all, they must be set by the states, or the promises of a limited and federal government become little more than empty rhetoric, and attempting to create them, despite the vertical allocation of power the Constitution envisions, stretches the oath toward a breaking point.

Likewise, it would not comport with the Constitution that arose out of the American Revolution for a committed monarchist to take the Presidency. Our republic was formed in opposition to monarchy, and someone who fundamentally disagreed and worked to make the Presidency more and more “king-like,” and put pressure on the constitutional provisions toward that end, would be acting in bad faith when they swore to upheld our constitutional settlement of this question.

In a slightly more subtle way, a proponent of a parliamentary system would also find it a challenge to protect and defend the Constitution. The Founders obviously were familiar with the parliamentary model of Britain, and specifically declined to adopt it. Therefore, a President who sought to govern only through channeling the will of a legislative majority, manipulated the system to simulate parliamentary party dominance, and did not exercise independent judgment, would be in violation of his or her oath.

By the same token, it will not do to promulgate a theory of constitutional interpretation that in effect says one is entitled to do as President whatever the Supreme Court says one may do, and to simultaneously plan to appoint to the Court people with an unusually lax interpretive position. This represents a scheme to leach the Constitution of its textual force, just by proxy rather than directly. And at the same time, it confers on the Court a power not intended by Article III. Consequently, this too would seem to be in contravention of the presidential oath.

Although I completely disagree with him politically, Bernie Sanders seems like a reasonably sincere and honest person, and it is these very qualities that probably distinguish him in the public mind from his chief rival and partly account for his new popularity. The other part of that appeal is his frank adherence to socialism, and his public refusal to identify as either a supporter of the capitalist system or a member of the Democratic Party. Instead of the Democrats’ platform, he espouses a political model of democratic socialism, a comprehensive welfare state that substantially (but not totally) equalizes wealth and income, and which inspired the systems that once characterized (but no longer quite do) the Scandinavian countries.

This is a perfectly legitimate political position for American citizens to take: I personally think it is a mistake (and the occasional center-right government in Scandinavia agrees with me), and worry that much of the attraction of socialism among younger voters is the product of miseducation by the academic left, economic illiteracy, and wishful thinking. Set that aside. Bernie Sanders can call himself a socialist and try to turn Vermont into a New World Denmark, and if he can convince enough of the electorate to go along with it, they can go a long way towards that objective. Indeed, Vermont recently created a democratic socialist “single payer” healthcare system; it is true this program was a complete fiasco and had to be repealed last year lest it destroy the state economy, but Vermont could and did do it.

The difficulty, it seems to me, comes when Bernie Sanders becomes Senator Sanders or a fortiori, President Sanders, and takes responsibility for the United States as a whole. In those circumstances, Sanders must come to grips with conflict between his socialist beliefs and his duties to a Constitution designed by people with very different political beliefs. To the extent other Democrats actually hold similar beliefs to Sanders (but characterize them less forthrightly) they face the same conflicts. How they intend to resolve them would be a meaningful line of questioning at the next Democratic candidate's debate, and the American people should listen thoughtfully to their answers – and even more carefully if they refuse to answer.