Clayton Lockett and the Death Penalty Present a Conundrum for Conservatives 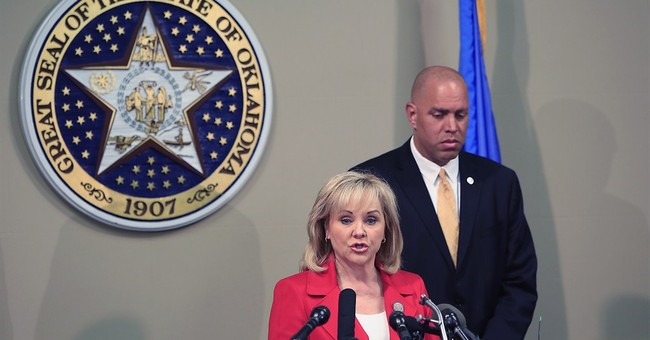 Oklahoma’s botched execution highlights a sort of conservative conundrum. Clayton Lockett received lethal injection drugs at 6:23 p.m. Tuesday night, and fell unconscious after speaking and struggling for 10 full minutes. He finally died of a heart attack 43 minutes after the drugs began flowing. Lockett and another man scheduled to die on the same day had sued the state, demanding information on drugs they believed to be faulty. Instead, Oklahoma officials refused to disclose which drugs they planned to use or where they came from, and moved forward with the execution.

Here’s the fundamental issue at hand for small-government types: Conservatives are rightly skeptical of government power because they possess a full understanding of the depth and endurance of its corruption and incompetence. Skepticism toward central planning rightly informs the conservative that men in suits shouldn’t decide how people should spend their money. Yet somehow this skepticism fails to inform that perhaps those same men in suits shouldn’t decide who should live and who should die.

By all accounts, Clayton Lockett wasn’t wrongly convicted, and if anyone deserved to die for their crimes, it was him. But that doesn’t change the fundamental fact that, generally speaking, clearly bureaucrats don’t suddenly become any more omnipotent, or even any less lazy, stupid, and corrupt, when they are holding a syringe than when they are holding a checkbook.

This isn’t just conjecture. Since 1976, more than 140 people have been freed from death row after being wrongfully convicted. And according to new research, nearly four percent of U.S. capital punishment sentences are wrongful convictions, and researchers call that a “conservative estimate.” There is simply no reason to expect that the same group of imbeciles which builds too much for diapers in one year alone is going to suddenly become competent when it comes to executing people.

The fact - not the theoretical possibility, but the very real fact - that government bureaucrats execute innocent people is obviously the most compelling reason to strip that power from them. However, it’s hardly the only one.

Those same people who are upset not just by the incompetence and wastefulness of government spending, but by the sheer scale of it should be concerned with how much the death penalty costs taxpayers. Research indicates that death penalty cases rack up 20 times the cost of comparable cases where prosecutors seek life without the possibility of parole. Amnesty International puts the cost at 3 to 10 times more. Even when those expensive death sentences are handed down, more than one-third of death row inmates have their sentences reduced to life in prison before they’re executed.

But what about the deterrence factor? After examining more than 30 years of statistical data and studies, the National Research Council found no credible evidence that the death penalty deters violent criminals. Part of the reason is that the way the human mind works is that the more time that elapses between the stimulus and the response, the less impact the response has on behavior. Death row cases themselves are always more drawn out. And it nearly always takes the state years of appeals to actually execute a convict. Lockett had been imprisoned for 14 years before he was executed.

It’s not just small-government, individual-liberty types who are turning a corner. Opposition to the death penalty for convicted murderers is up 6 percentage points since 2011, and 18 since 1996, according to a recent Pew Research survey. More than a third of U.S. adults now oppose giving the state the power to end lives. As a result, six states have joined the majority of the developed world in abolishing the death penalty.

The death penalty simply doesn’t pass any test for limited government or individual rights. Everything that makes one a conservative -- skepticism toward concentrated power, opposition to government wastefulness, an awareness of government corruption and incompetence -- leads to the inevitable conclusion that the death penalty absolutely must be abolished before the state can botch another lethal injection. Clayton Lockett may have deserved to die. But Americans deserve a criminal justice system which can’t execute someone who doesn’t.