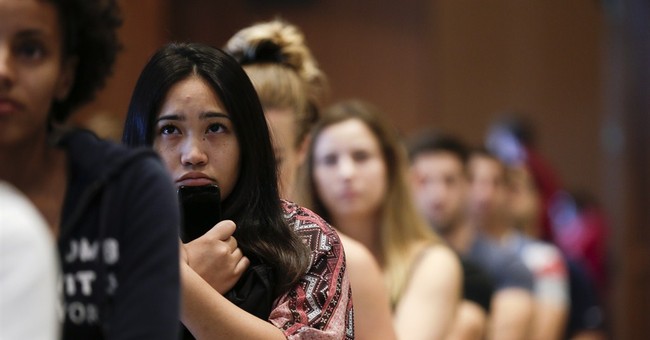 Due process advocates have been up in arms over the past few months as California passed the first statewide “affirmative consent” law in the nation. According to the freshly signed SB 967, all college campuses accepting financial aid in the Golden State must enforce a high standard of establishing sexual consent in student disciplinary hearings, requiring both parties in question to vocalize their approval before engaging in sexual acts.

While an array of concerns have been raised about the legal ramifications of this law, one important question has been left out of the discussion almost entirely — why are rape cases even handled by colleges in the first place?

If it seems odd that a crime as serious as sexual assault is managed by the very same incompetent bureaucrats that harass students with asinine policies like dormitory curfews, it should come as no surprise that the federal government is at work. In fact, the law that created the current system of student disciplinary hearings is one that has been reviled for decades for a very different reason: Title IX.

Yes, the 1972 federal gender equality amendment infamous for forcing hundreds of colleges to cut male athletic teams is also responsible for the kangaroo courts that plague the American higher education. In the years immediately following the law’s passage, a number of female victims of sexual assault started suing their college campuses, claiming that their lack of a disciplinary pathway to hold their rapists responsible infringed upon their access to education under Title IX. A federal courtagreed in 1980, and colleges across the country quickly began establishing disciplinary boards for sexual assault thereafter.

Although this history development may look like a victory for justice at first glance, the reality is that disciplinary boards ultimately fail both victims and assailants of sexual assault while shattering the lives of countless falsely accused students.

Regarding the former, student disciplinary boards do not have the power to arrest or imprison actual rapists like the police. The worst punishment that they can inflict on a student is expulsion; the least is a mere mark in a student’s record, leaving them free to lurk campus among past and potentially future victims. True retribution can only be served by the justice system, where a rapist can be arrested and sentenced to prison after a fair trial.

Colleges can do none of this. In fact, many disciplinary boards have a lower standard of proof than criminal courts. California’s new law, for example, not only requires colleges to raise their benchmark of consent but also to lower their standard of proof to a “preponderance of the evidence” instead of the “beyond a reasonable doubt” measure that criminal courts use. This legal distinction is significant. Whereas the reasonable doubt standard requires judges and jurors to have virtually no uncertainty about the accused's guilt, preponderance of the evidence allows tribunals to punish if they merely think that the accused is more likely guilty than not — a standard of 50.01 percent.

This low benchmark has given rise to countless questionable conclusions of guilt. One 2013 case highlighted by the Foundation for Individual Rights for Education at Occidental College involved two students who sent each other text messages that seemingly established consent, such as “do you have a condom.” Despite the fact that an investigation by the Los Angeles Police Department concluded that the accuser “even though she was intoxicated… could still exercise reasonable judgement,” Occidental determined the accused was guilty at a subsequent disciplinary hearing and expelled from the university.

“It’s sad that this process can be abused and that the university can totally change somebody’s life, with very little evidence,” one recently punished student at Brandeis University told The Washington Post recently. “In the real world, rape and sexual assault are crimes punishable by going to jail — and rightfully so. Why is this left up to schools?”

Title IX has left thousands of college athletes in the cold by cutting male sports teams in the name of bureaucratic compliance. Now it’s depriving countless falsely accused students of the due process they’re entitled to and victims of sexual assault the justice they deserve in a real court of law. It’s time to reexamine this broken law in the name of restoring sanity on America’s college campuses.