Lessons for the GOP in Brown's Victory 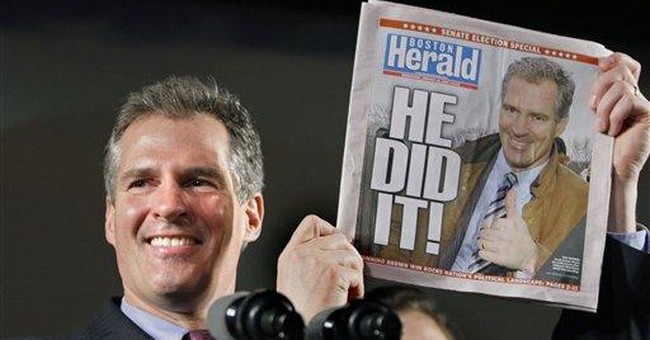 Fresh off the best week they’ve had in years – literally – conservatives and Republicans would be something less than human if they denied themselves the opportunity to savor an amazing trifecta of victories: First and foremost, the election of Scott Brown to Ted Kennedy’s former Senate seat, along with the Supreme Court decision vindicating the First Amendment rights of corporations and the demise of Air America.

But the time for jubilation is almost over; the time for some serious thought and hard work is just beginning. If they learn the wrong lessons from last week’s events, Republicans will find themselves with significantly less to celebrate next November. And drawing the right conclusions from Brown’s victory will make all the difference. So what should conservatives and Republicans keep in mind?

1. Give It the Light Touch. Wasn’t it little Orphan Annie who sang, “You’re never fully dressed without a smile”? Well, Republicans aren’t. Even as Scott Brown deplored Obama’s agenda and called for a change, he did it with cheer and good humor. He didn’t stoop to ugly, personal politics as his opponent, Martha Coakley (and then the President, with his cracks about Brown’s truck), did. That’s important. It robs the GOP’s opponents (in both the Democratic Party and the press) of the opportunity to characterize conservatives and Republicans as frightening, mean and angry.

2. Be Specific. Scott Brown was clear about what he wanted to go to Washington to do: Stop ObamaCare, cut taxes, and present a strong front to America’s enemies. He didn’t have a detailed agenda, but he did have a specific one – short, concise, easy to understand – that, not incidentally, resonated with voters’ deepest concerns.

3. Don’t Overpromise. Brown didn’t claim that if voters sent him to Washington, he could upend the entire Democrat agenda and win the war on terror. That’s because he couldn’t. Instead, he promised to be the 41st vote to stop ObamaCare. Similarly, Republicans will find themselves at the mercy of an angry, discontented electorate if they repeat one of the mistakes of the President’s campaign: Promising the conservative equivalent of slowing the rise of the oceans. Either voters will see through the false promises at the outset (most likely, in the cynical, post-Obama-election age) or – as the President is now learning – they will extract a heavy political price for having earlier been deceived.

4. Forget Abstract Ideology. Although pundits and partisans on both sides of the political spectrum are often wildly ideological, most Americans are not. They’re pragmatic. They’re less worried about abstract bogeymen like “Big Government” than they are about whether they themselves, their neighbors, and the country are doing well. If they’re not, voters want the problems solved. Period. Certainly, periods of liberal overreach – like we’ve just witnessed on the part of the Democrats – can raise awareness about the dangers of an oversized, over-intrusive government imposing an unpopular health care bill and jobs-killing cap ‘n trade legislation. But the resulting public opposition springs as much from widespread dislike of the details of the programs at issue as it does from any abstract notions about “the proper role of government.”

5. Don’t Fall For “Big Business.” It’s easy to understand why conservatives or Republicans might feel an instinctive kinship with “big business.” Whether as a counterweight to “big government” or a fellow adversary of left-wing labor unions, it would seem to be a natural GOP ally. But as we’ve recently learned, big businesses can easily become the pawns of an ever-expanding nanny state. They’re large enough to attract the notice of a crafty left-wing government that can woo them with special treatment; once the government succeeds in co-opting them, they simply double the threat to Americans’ freedom. Rather than creating (or maintaining) a facile distinction between “big business” and “big government,” Republicans and conservatives should be putting themselves on the side of freedom and fair treatment for all – and opposing any threat to those principles, whether it comes from Big Government or Big Business.

6. Grace matters. In the first flush of triumph, with possibly even greater political victories on the way, it would be easy for conservatives and Republicans to pile on a flailing President and a gob-smacked Democratic Party. Let’s hope they resist that impulse. Scott Brown's post-victory invocation of Ted Kennedy manifested a generosity of spirit that other politicians would do well to emulate. Americans appreciate graciousness; indeed, had the President and other leaders of his party shown more of it when their political position seemed unassailable, perhaps there would have been less room for the hubris that has led to the destruction of their dearest political hopes.

Ultimately, Scott Brown’s victory has offered conservatives and Republicans a great opportunity to stop the most damaging aspects of the Obama agenda – and to provide voters with a clear choice for the 2010 elections – if they choose to seize it. If Brown’s win is interpreted by Republicans as nothing more than the “beginning of the end” for Democrats, it will be a tragically squandered opportunity. But if conservatives and Republicans see it as “the end of the beginning” for them and an agenda based on prosperity, strength and freedom – well, the sky is the limit.