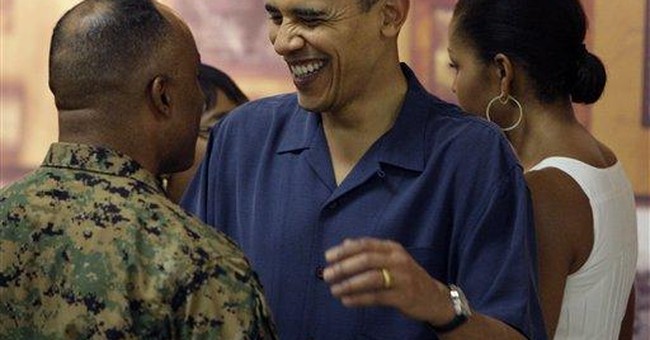 Certainly, 2009 is not ending on the note that Obama supporters – or the President himself – expected. Iran develops a nuclear arsenal unchecked, spitting in the eyes of the United States and the rest of the world. As evidenced on Christmas Day, Al Qaeda adherents still plot to murder innocent Americans. Notwithstanding his campaign pledge to slow the rise of the oceans, President Obama will find it difficult to execute at home the climate-change promises he made abroad.

And that’s just foreign policy. At home, the “stimulus” rushed through Congress with the promise of a quick economic recovery and more jobs has shown no results – except trillions in new deficits, high unemployment and a continuing story of payoffs to key Democrat constituencies. Health care “reform” – intended as the apotheosis of liberal, big-government do-gooderism – has degenerated into a political disaster for the Democrats, with significant majorities of Republicans and independents opposing new congressional legislation so misbegotten that even its supporters characterize it as “flawed.”

Yet even as Obama’s partisans have been surprised, perhaps his political adversaries have been astonished, as well. Given the uncritical coverage of the new President by the media during last year’s campaign – and the warm embrace extended to him by the overwhelming majority of Americans last January – the magnitude of the burgeoning, spirited (but non-violent) repudiation of his brand of big-government liberalism has been heartening, and amazing.

Too often over the years, all the political passion (and public demonstrations of it) has seemed to come from groups on the left seeking an ever-larger role for government in American life. Students, unions, actors, community organizers and such have made most of the noise, not coincidentally because they’ve been the ones with the time and the inclination to do it. Those on the other side – small business people, the self-employed, stay-at-home moms and the like – have traditionally worked to succeed within the status quo, rather than constantly trying to change it. Often they’ve been so busy, in fact, that they’ve failed to notice when little bits of their liberty have been incrementally chipped away.

It took the shock of a year of unchecked Democrat rule to change all of that. Suddenly, regular Americans – the ones usually too busy or too complacent to protest – have come to realize that, like Frankenstein’s monster, big government has taken on a life of its own. The federal government (led by a man who never held a private-sector business job) has taken over Chrysler and General Motors. Government appointees decree how much (and how) certain businesses can pay their own employees. And through environmental taxation and regulations, bureaucrats are seeking to seize control of virtually the entire private sector.

Suddenly, the liberty and free enterprise most of us have taken for granted seem to be in the greatest jeopardy of our lifetime. Worse yet, Democrat politicians have ignored the public outcry, ramming through unpopular legislation that would put one-sixth of the economy (and every American’s health care!) under government control. Regular Americans – the ones more inclined to watch sports or go shopping than to organize protests – have taken notice. They’ve also taken umbrage.

By overreaching and arrogantly ignoring the widespread public discontent with them and their policies, Democrats from the President on down have succeeded in awakening a sleeping giant – regular Americans. They are people who may often take their freedom for granted, but who don’t intend ever to let it be taken away.

They are the male and female heirs to the Sons of Liberty of Revolutionary times, the people who understand the danger of a government leviathan, and who insisted on “No taxation without representation.” After watching the politicians they voted into power last year ignore the common good, instead seeking only power and political advantage for themselves, they’re appalled – and perhaps even a little frightened.

Certainly, 2009 was a dark and disheartening year for lovers of economic and individual liberty. But if next year shapes up in accordance with current trends, the tide is about to change. With a growing recognition of the preciousness (and fragility) of liberty and a renewed appreciation of our founding principles, America is poised for a rebirth of freedom. Hail 2010: The Year of the Citizen.