Abbas Must Be Stopped 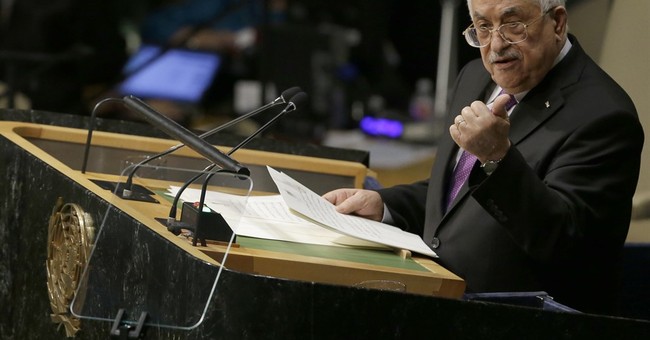 All the Palestinian terrorist attacks that have been carried out in recent weeks share one common feature. All the terrorists believe that by attacking Jews they are protecting the Temple Mount from destruction.

And why shouldn’t they believe this obscenity? Everywhere they go, every time they turn on their televisions, read the paper, go to school or the mosque they are told that the Jews are destroying al-Aksa Mosque. Al-Aksa, they are told, is in danger. They must take up arms to defend it from the Jews, whatever the cost.

One man stands at the center of this blood libel. The man who propagates this murderous lie and orchestrates the death and mayhem that is its bloody harvest is none other than the West’s favorite Palestinian moderate: PLO chief and Palestinian Authority Chairman Mahmoud Abbas.

On September 16 Abbas gave a speech. It was broadcast on PA television and posted on his Facebook page. In it, he incited the Palestinians to kill Jews. In his words, “Al-Aksa Mosque is ours.

They [the Jews] have no right to desecrate it with their filthy feet. We won’t allow them to do so and we will do everything in our power to defend Jerusalem.”

Abbas added, “We bless every drop of blood spilled for Jerusalem. This is clean and pure blood, blood that was spilled for God. It is Allah’s will that every martyr will go to heaven and every wounded [terrorist] will receive God’s reward.”

Two weeks later, Abbas opened his address before the UN General Assembly with the same lies, threats, and incitement.

Almost exactly a year ago, Abbas spewed the same bile in a speech, with the same murderous consequences. In a speech before Fatah’s executive committee last October, Abbas said, “We must prevent them [the Jews] from entering the holy site in every possible way. This is our holy site, this is our al-Aksa and our church [the Church of the Holy Sepulchre]. They have no right to enter them. They have no right to desecrate them. We must prevent them from entering. We must block them with our bodies to defend our holy sites.”

During that period, Arab terrorists massacred rabbis in prayer at a Jerusalem synagogue, attempted to assassinate human rights activist Yehudah Glick, and murdered Jews standing at light rail stops in the capital.

Eleven Israelis were butchered in that terrorist onslaught.

Then as now, Abbas and his lieutenants not only incited attacks, they incentivized would be perpetrators to kill Jews.

Every year, the same PA that claims perpetual poverty pays more than $100 million to terrorists imprisoned in Israeli jails. Their salaries range between four to seven times the average PA salary, depending on the lethality of the attacks they carried out.

Popular awareness of the financial benefits of terrorist activities has played a critical role in motivating Palestinians to attack Jews. This is made clear by the actions in recent weeks of several of the supposedly “lone wolf” attackers in the hours before they struck. Several of them – like their predecessors in last year’s onslaught – announced their intention to become martyrs to protect al-Aksa from the Jews on their Facebook pages immediately before they carried out their attacks.

Money may be the greatest incentive Abbas and his PA provide for potential terrorists. But it isn’t the only one. There is also the social status they confer on terrorists and their families. Every would-be terrorist knows that if he succeeds in killing Jews, he will be glorified by the Palestinian media and his family will be embraced by the PA establishment – first and foremost by Abbas himself, who has made a habit of meeting with terrorists and their families.

Presently, Israel’s security brass is embroiled in a bitter dispute with our elected leaders regarding the nature of the current terrorist offensive. The dispute bubbled to the surface Wednesday night when the generals used military reporters to criticize Prime Minister Benjamin Netanyahu for blaming Abbas for the violence.

The generals insist that Abbas is a good guy.

He’s trying to calm the situation, they argue, and Israel needs to support him.

From the looks of things, the IDF seems to have the upper hand in this fight. This is the only way to read Netanyahu’s announcement Wednesday night that he is barring government ministers and members of Knesset from visiting the Temple Mount until further notice. Netanyahu’s move is nothing less than a signal that he accepts Abbas’s premise that there is something wrong with Jews exercising their right to visit Judaism’s holiest site.

The generals’ rationale for defending Abbas is fairly straightforward. Throughout the current Palestinian terror onslaught they have continued to cooperate with Abbas-controlled Palestinian security forces in Judea and Samaria.

These forces cooperate with the IDF in seeking out and arresting terrorists from Hamas and other groups that are not subordinate to Abbas. The fact that Abbas has ordered his men to work with the IDF has convinced the generals that he is a positive actor. So as they see it, he must be protected.

In their view, Israel must limit its counterterrorism operations to tactical operations against trigger pullers and their immediate commanders and ignore the overarching cause of the violence.

In behaving in this manner, our security brass is being willfully blind to the fact that Abbas is playing a double game. On the one hand, he orders his forces to be nice to IDF officers in Central Command when they fight terrorist cells from Hamas and other groups not loyal to Abbas, and so wins their appreciation.

But on the other hand, Abbas works with those same terrorist forces, incites them to attack, and rewards them for doing so.

Perhaps the most outrageous aspect of the IDF’s insistence that Abbas is critical to its counterterrorism efforts is that the IDF’s own data demonstrate that Abbas has played an insignificant role in quelling terrorist attacks against Israel.

As Jerusalem Post columnist Evelyn Gordon showed in an article in Commentary this week, according to official data, from 2002 when Palestinian terrorist activities in the areas were at their peak until 2007, when Israel began transferring security control over some Palestinian cities to Abbas’s forces, levels of terrorism went down 97 percent. Even after Israel began permitting Abbas to deploy his security forces to Nablus and Jenin, the IDF has continued to operate at will in these areas, often on a nightly basis.

As Gordon noted, the only place Abbas has exercised sole security control was in Gaza. From September 2005, when Israel removed its military forces from Gaza until Hamas expelled Fatah forces from the areas in June 2007, Abbas’s forces had full control over Gaza. During this time, his forces did nothing to prevent Hamas – and Fatah forces – from attacking Israel with thousands of mortars and rockets. His forces did nothing to prevent the massive transfer of advanced weaponry to Gaza from Egypt and Iran.

True, since his forces were routed in Gaza, Abbas has ordered them to work with the IDF in Judea and Samaria to prevent Hamas from overthrowing him. But at the same time, he continuously seeks to form a unity government with Hamas.

He funds Hamas. He glorifies its terrorists. And he refuses to condemn their attacks against Israel.

Moreover, while ordering his men to help the IDF to protect him from Hamas, he leads the diplomatic war against Israel internationally. The goals of that war are to harm Israel’s economy and deny Israel the right to self-defense.

Our political leadership’s reluctance to stand up to the army is understandable. It is nearly impossible to order the IDF to take action it opposes.

At some point though, the government is going to rein in our insubordinate generals. Fortunately, the government doesn’t need the IDF to deal with Abbas and destroy his capacity to foment and direct attacks against Israel.

Our elected officials have the authority to go after the twin foundations Abbas’s terrorist offensive on their own. Those foundations are the incitement and the financial incentives he uses to motivate Palestinians to attack Jews.

On the financial end, the Knesset should pass two laws to dry up the wells of terrorism financing.

First, the Knesset should pass a law stipulating that all property belonging to terrorists, and all property used by terrorists to plan and carry out attacks, will be seized by the government and transferred to the victims of their attacks.

Moreover, all compensation paid to terrorists and their relatives pursuant to their attacks will be seized by the government and transferred to their victims.

The second law would relate to Israel’s practice – anchored in the Oslo Accords that Abbas revoked last month at the UN – of transferring tax revenues to the PA. The Knesset should pass a law prohibiting those transfers unless the Defense Minister certifies that the PA has ceased all terrorism- related activities including incitement, organization, financing, directing and glorifying terrorist attacks and terrorists.

Until he so certifies, all revenues collected should be used to pay PA debts to Israeli institutions and to compensate victims of Palestinian terrorism.

As for the incitement, the government needs to go to the source of the problem – Abbas’s blood libel regarding Jewish rights to the Temple Mount.

As things stand, Abbas is exacting a price in human lives for his obscene anti-Jewish propaganda about our “filthy feet defiling” the most sacred site in Judaism. By barring elected officials from visiting the Temple Mount, not only is the government failing to exact a price for Abbas’ obscene propaganda. It is rewarding him and so inviting Abbas to expand his rhetorical offensive.

To remedy the situation an opposite approach is required. Rather than bar elected officials from visiting the Temple Mount, Netanyahu should encourage them to do so. Just as he sent a letter to Jordan’s King Abdullah telling him that Israel is preserving the status quo on the Temple Mount, so he should write a similar letter to our lawmakers.

The Palestinian terrorist onslaught now raging against us is not spontaneous. Abbas has incited it and is directing it. To stop this assault, Israel must finally take action against Abbas and his machinery of war. Anything less can bring us nothing more than a temporary respite in the carnage that Abbas will be free to end whenever he wishes.