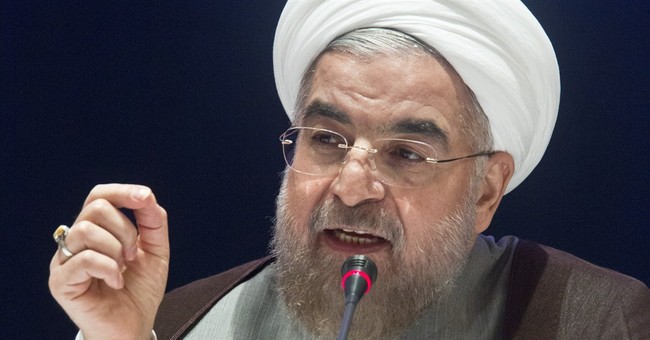 It is still unclear what happened on Sunday night at Iran’s illicit nuclear installation at Parchin. According to Iranian sources, there was a large explosion that rocked the area within a 15-km. radius of the facility. Two people were reportedly injured.

According to the UN’s International Atomic Energy Agency and Israel, the Parchin facility is a key component of Iran’s suspected military nuclear program. It is at Parchin that Iran is allegedly building a nuclear explosive device – that is, a nuclear warhead.

The timing of the blast is notable. On Monday night, a delegation from the IAEA landed in Tehran for a new round of talks scheduled for that Tuesday. The UN’s demand to inspect Parchin was set to be one of the top agenda items at the talks.

Given the timing, it is certainly possible that the Iranians carried out the explosion themselves as a means of preventing the IAEA from demanding access.

But let us assume that the widely held automatic assumption – that Israel was behind the blast at Parchin – is accurate. The fact is that in order to destroy Iran’s nuclear weapons program, or seriously setback its completion, dozens, if not hundreds of additional targets need to be hit and destroyed.

Iran has secured its illicit nuclear program by dispersing and replicating its nuclear installations throughout the country. If the Parchin bombing was carried out by Israel, it must be seen as but another strike in Israel’s purported – and if it exists, meandering – campaign to destroy Iran’s capacity to develop nuclear weapons.

At the desultory rate Israel’s assumed campaign is progressing, we can have little confidence that through bombing alone, Israel will be able to prevent Iran from acquiring nuclear weapons in the near future.

One of the main reasons that Israel’s purported strikes in Iran have been so lethargic is because the US opposes them. As we have seen in recent years, the Obama administration has been a sieve of information to the media about Israel’s alleged covert strikes in Iran. To successfully neutralize Iran’s nuclear facilities through acts of sabotage, Israel needs to hide its effort from the US as well as Iran.

In light of these constraints, Israel should consider expanding the goal of its policy towards Iran from merely debilitating Iran’s nuclear project to ending it entirely by overthrowing the regime.

There are many reasons to believe that overthrowing the regime is a realistic option.

First and foremost, to the shock and amazement of the entire world, following the stolen 2009 Iranian presidential elections, the Green Movement arose spontaneously and nearly overthrew the regime. Millions of Iranians from across ethnic lines and throughout the country rose up against the regime. They rallied around presidential candidates Seyyed Mir-Hossein Mousavi and Mehdi Karroubi and demanded that the mullocracy be replaced with a democracy.

Had the Obama administration backed the Iranian people rather than the regime, it is likely that the Iranian Revolutionary Guards Corps (IRGC) and supreme dictator Ali Khamenei would have been finished six years ago along with their nuclear program and worldwide terrorist network.

Dr. Michael Ledeen, Freedom Scholar at the Washington-based Foundation for Defense of Democracies has been closely following the Iranian regime since he served in the Reagan administration in the 1980s. In 2009, he argued that even without US assistance, if Israel had been willing to help the Green Movement, with little effort, it could have empowered the opposition sufficiently to overthrow the regime.

In a conversation this week, Ledeen said Israel still has the capacity to provide opposition forces the tools they require to overthrow the regime.

Today, with Khamenei reportedly seriously ill, the widespread assessment is that Iran is already in the throes of a succession crisis. As Ledeen sees it, radical ayatollahs are vying with the IRGC and Khamenei’s family to succeed him. President Hassan Rouhani is also seeking to ascend to Khamenei’s all powerful throne.

At the same, time, as Iran enters into this period of political uncertainty, the regime itself is less popular than ever.

Rouhani was elected last year on the strength of his promise to expand freedoms in Iran. Since he took office, repression, not freedom has expanded.

Over the past year, the number of regime executions and mass arrests has skyrocketed. So too, the number of Iranian political prisoners subjected to torture has risen. Despite Rouhani’s promise to free them, Mousavi and Karroubi, who were placed under house arrest in 2011, have not been freed.

Last week, the family of Ayatollah Hossein Kazemeyni Boroujerdi announced that the religious leader has been informed that he is about to be executed by the regime. Boroujerdi is serving his eighth year of an 11-year prison sentence for rejecting the religious legitimacy of the regime and demanding, in keeping with Shi’ite jurisprudence, its overthrow and replacement with a democracy in which mosque is separated from state.

Boroujerdi enjoys massive support in Iran. His bravery in the face of regime repression is breathtaking.

Since his arrest, Boroujerdi has been subjected to barbaric torture. And yet, rather than repent his ways, as the regime demands, he has smuggled letters to the world outside his prison exposing the dismal state of human rights in the Iran, and the heresy at the heart of the regime.

Ledeen claims that an Israeli campaign to highlight the suffering of Iranian political prisoners and dissidents that would include constant public condemnations of the regime, calls for the release of political prisoners, and support for greater freedom, particularly for women would have a major impact both globally and in Iran.

If such a campaign is coupled with the provision of communication equipment for the opposition to let its leaders and followers bypass the regime’s firewalls and communicate freely with one another, its chances of success would grow. So too, the provision of financial and other support for Iranian workers’ unions, including building international support for their rejection of the regime, and broadcast of accurate news, by among other things expanding the broadcast time allotted to Voice of Israel Persian service, could empower the regime’s opponents.

Ledeen scoffs at the concern that Israeli support for regime opponents will boomerang against them and strengthen public support for the regime. As he put it, “Opponents of the regime are always accused of being in cahoots with Israel and the US, so getting support doesn’t change their risk, and in fact will strengthen them… The opposition is probably amazed they are not getting help from Israel.”

A different policy of regime overthrow was put forward by Nicholas Saidel in an article published last month by Mida online magazine. Saidel recommended that Israel adopt a more involved policy of directly supporting minority liberation movements operating inside Iran. Saidel noted that oppressed, irredentist minorities – including the Azeris, Kurds, Ahwazi Arabs and Baluchis together comprise more than a third of Iran’s population. He suggests that the regime should be overthrown and Iran should be carved up into a number of smaller states that will be too weak to threaten Israel.

Saidel notes that all four minorities have in the past cooperated with Israel. Some have spoken openly in favor of Israel. Israel, he argues, has the wherewithal to help them today in significant ways that will, at a minimum, significantly weaken the regime and so limit its ability to harm Israel.

Of the two options, the potential downside of Saidel’s is far higher. The specter of small, powerful jihadist forces along the lines of Islamic State and the Taliban being installed in power in Iran is distressing. But even in this case, the payoff of destroying the regime, and so ending Iran’s nuclear program and its sponsorship with Hezbollah, Hamas and other jihadist terror groups would be enormous.

Regardless of how one assesses the risk of either policy of supporting regime opponents, given the risk a nuclear armed Iran will constitute for Israel; the Obama administration’s obvious preference for a nuclear armed Iran over an Israeli strike against Iran’s nuclear installations; and the ever growing threat posed by Iran’s terrorist proxies, it would appear that the risks attached to adopting either Ledeen’s approach, or Saidel’s approach, or both, are far smaller than the risk of letting Iran take out membership in the nuclear club.

What the sanctions actually convinced them was that it was worth their while to pretend to be interested in a nuclear deal in order to loosen or end the sanctions. Acting this way would not prevent them from acquiring nuclear weapons but would restore Iran’s economic viability.

Over the past decade, attempts to get Israeli military leaders to even consider a program of assisting the regime’s opponents have come up empty.

The time has come to reconsider this refusal. In his recent public remarks on Iran, Prime Minister Benjamin Netanyahu argued repeatedly and rightly that the Iranian regime is more dangerous to global security than Islamic State. But he has abstained from mentioning that the Iranian regime is as dangerous to those living under its jackboot as Islamic State is to those who come under its power.

Had Netanyahu raised Boroujerdi’s plight in his speech at the UN, it would have weakened Rouhani.

And for his part, Boroujerdi would not have been any more imperiled than he already is.

So too, the seven young Iranians who were sentenced last month to suspended jail sentences and 91 lashes for daring to post an Internet video of themselves singing Pharrell Williams’s song “Happy” will not be any more unhappy and oppressed if Israeli leaders stood up for their right to be happy.

Ledeen remarked, “I’ve rarely seen a policy that was both strategically and morally imperative, but [supporting the Iranian regime’s domestic opponents] is certainly one of them.”

We may never know what exactly happened Sunday night at Parchin. But we certainly know that it will take hundreds more mysterious explosions to prevent Iran from getting the bomb. And even if such explosions take place, so long as the regime remains in power, there is every reason to believe that such achievements will lack significance in the long term.

Iran is Israel’s greatest foe. Between its support for Hezbollah and Hamas and its nuclear program, it threatens Israel more gravely than any other state today. The best way to end these threats is not to fight another round against its proxies. It is to go to the source of the problem.