Canada Takes its Place at the Table 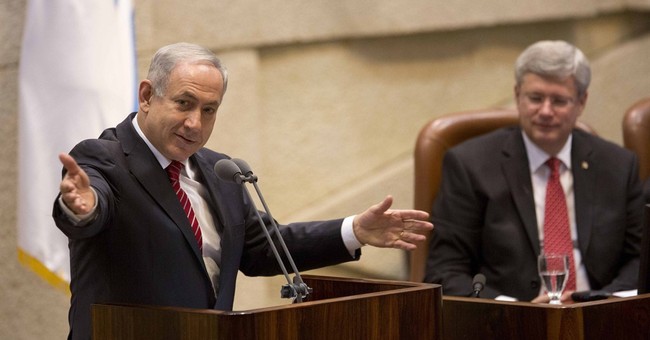 During a press conference with Prime Minister Binyamin Netanyahu on Tuesday, an Israeli reporter asked visiting Canadian Prime Minister Stephen Harper, “Is Canada paying a price for being so supportive of Israel? Is it possible to support Israel and still have ties to the Arab world?”

This question goes to the heart of what is generally perceived as Israel’s greatest weakness. The Arab boycott of Israel and of companies doing business with Israel has served as one of the most potent weapons in the anti-Israel arsenal for over a generation. Indeed, since the OPEC oil embargo in 1974, it has been the Arabs’ single most powerful weapon in their unceasing campaign for the destruction of the Jewish state.

It was Arab economic bullying that forced African nations to cut their ties with the Jewish state.

It was the Arab use of the oil weapon after the 1973 Yom Kippur War that convinced Western Europe to end its diplomatic support for Israel and throw in with the PLO.

More than anything else, it is the Arab economic boycott of companies that do business with Israel that has eroded Israel’s diplomatic standing over the past two generations and transformed the only human rights respecting democracy in the Middle East into an international pariah.

And yet, under Stephen Harper, as the noose of international isolation is drawn around Israel’s neck more tightly every day, Canada has emerged as an outspoken supporter and defender of the Jewish state.

So in essence, the Israeli reporter’s question to Harper could easily be rephrased as, “Are you crazy?”

Harper responded to the question by rejecting its premises – that the Arab world behaves as a bloc, and that standing up for your convictions is a losing proposition when those convictions involve taking unpopular stands.

As he put it, “I wouldn’t want to say there is no price, but my general view of the world is that people respect your view, if you express it appropriately and they understand it’s genuine….The fact of the matter is, Canada has deep relations with many Arab countries…. And frankly [there are] many matters where we probably far more often agree than disagree. So look, I don’t think it’s automatically the view that if you have a particular issue where you disagree, that this needs to rupture relationships irrevocably.”

In other words, what Harper acknowledged was that yes, Canada has lost contracts in some Arab countries due to its support for Israel. But by and large, it hasn’t taken a serious hit.

The obvious follow-up question would have been to ask if Canada gains anything from its support for Israel that can compensate for the economic hits it takes for it.

The answer to that question is yes, Canada, and other countries that support Israel now, when such support is more notable than it was in the past, do gain significantly from their actions. This is true on two levels.

First, economically, Israel is in a far different position than it was 20 years ago. During Harper’s visit, Canada and Israel updated their free trade agreement and signed a number of other agreements enhancing cooperation in multiple fields.

As Netanyahu said, “I think that cooperation makes us both stronger and more prosperous and more secure countries.”

For the past 15 years, Norway has distinguished itself as a trailblazer in the European bid to isolate Israel politically and wage economic warfare against it. Norway was among the first European countries to divest from Israeli companies. Its trade unions have been leading purveyors of anti-Israel propaganda and economic warfare.

Last fall Norway elected a new conservative government. And under the leadership of Prime Minister Erna Solberg, Norway is seeking to rebuild its ties with Israel. Just after the election, the Israeli embassy in Oslo hosted a meeting of Norwegian and Israeli businessmen. Norway’s new finance minister is interested in cooperation between Norway’s oil industry and Israel’s new natural gas sector.

Norway’s new minister of culture, Thorhild Widvey, held a workshop for 160 Norwegian television producers with Israeli producers who successfully sold Israeli series to the US market.

Disowning the boycott Israel movement, Widvey said, “We don’t see the boycott as an effective tool to promote positive change.”

Today, the economies of the Arab world are collapsing. Fracking technologies are lowering demand for Middle Eastern oil. Political instability is drying up foreign investment and tourism. And local universities are incapable of producing graduates able to function in the global economy.

As a consequence, the Arabs’ capacity to intimidate governments into rejecting the economic benefits Israel has to offer is steadily decreasing.

Israel’s ability to compensate for potential loss of Arab business is not the main reason why supporting Israel helps Canada. Far more importantly for Canada, support for Israel gives Ottawa a say in global affairs. Canada today has the power to shape the global agenda to a degree it never had before.

Until Harper came along, Canada’s foreign policy was mainly characterized by Ottawa’s enthusiasm for all UN-related things. But Canada’s involvement in the UN never bought it a place at the table.

Down south in Washington, to the extent anyone thought about Canada at all outside the contexts of oil, beer and hockey, it was considered a run-of-the-mill NATO ally which occasionally expressed mild hostility to US power.

Under Harper’s leadership, Canada has become a player in the global arena for the first time. And this achievement owes in large part to his decision to support Israel.

Since the US became the leader of the free world at the end of World War II, several of its loyal allies built up their international position by exerting moral leadership and so convincing – through inspiration or shame – Washington to follow their example.

Britain is the prime example of this model. Both Winston Churchill and Margaret Thatcher won Britain a place at the table by staking out moral and strategic positions on Communism and other issues that the US was unable to reject without openly breaking with its own interests and stated goals.

Israel has also managed to stake out a position on the global stage – currently on the issue of Iran’s nuclear weapons program – by pointing out the contradictions between the US’s national interest of cultivating a stable Middle East and its current policy of mollycoddling the mullahs in Tehran while facilitating their nuclear weapons program.

By standing with Israel, Canada is filling a part of the leadership vacuum that the Obama administration has created by stepping away from the US’s responsibilities as the leader of the free world. From the G8 to the UN and beyond, Canada’s support for Israel has enabled Ottawa to influence US and European policy to a degree it never has before.

Canada’s enhanced moral stature was demonstrated this week with UNESCO’s abrupt decision to cancel the opening of an exhibition on the Jewish people’s 3,500-year history in the Land of Israel that was scheduled to open at UNESCO’s Paris Headquarters on Sunday.

Canada, Israel and Montenegro co-sponsored the exhibition which was organized jointly by the Simon Wiesenthal Center and UNESCO.

On January 9, the US rejected the Wiesenthal Center’s request for US co-sponsorship.

Kelly Siekman, director of the Office of UNESCO Affairs at the State Department wrote, “At this sensitive juncture in the ongoing Middle East peace process, and after thoughtful consideration with review at the highest levels, we have made the decision that the United States will not be able to co-sponsor the current exhibit during its display at UNESCO headquarters.”

In other words, the Obama administration opted to reject the historical fact that the Jews are the indigenous people of the Land of Israel in order to promote a peace process with the PLO, which, like the Arab world in general, rejects historical fact in its bid to delegitimize with the aim of destroying the Jewish state.

The administration’s embarrassment at this revelation was exponentially amplified by the fact that its duplicity, hypocrisy and preference for political expedience over historical facts came to light while Harper was in Israel, since unlike the Obama administration, the Harper government did co-sponsor the canceled exhibition.

Harper emerged from the UNESCO affront to the historical record as an unrivaled force of conscience and as a moral leader on a world stage populated by opportunists, at best. His position served as a warning to the US that its sacrifice of truth on the altar of the peace process will not go unnoticed.

Canada, it should be noted, is not the only country whose support for Israel is distinguishing it as a moral leader and facilitating its rise to a position of global influence. Australia’s new center-right Liberal government is also making a name for itself by rejecting anti-Israel nostrums that have become accepted wisdom despite the fact that they are based on lies.

For instance, for years, the false Arab claim that Israeli communities beyond the 1949 armistice lines are illegal under international law has gone unchallenged. But last week, Australian Foreign Minister Julia Bishop dropped a bombshell when, in an interview with The Times of Israel, she broke from the consensus of mendacity saying, “I would like to see which international law has declared them illegal.”

And the more outspoken Australia is in its support for Israel and rejection of the discourse of lies that characterizes the discussion of Israel, the more attention Australia will get and the more influential it will become on the world stage.

Like Australian Prime Minister Tony Abbott, Harper’s decision to support Israel is rooted in his most deeply held convictions about right and wrong. There is nothing opportunistic about his policy.

It is therefore wonderful and empowering that by staying true to his beliefs, Harper is also transforming Canada into a force to be reckoned with on the global stage. Moreover, he is setting an example that will likely be followed by more and more countries, as the benefits of his embrace of Israel become widely recognized.