A Low and Dishonest Decade 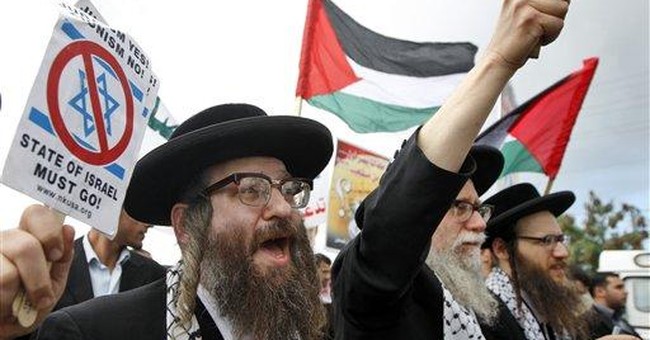 Upon returning from Cairo on Tuesday, Prime Minister Binyamin Netanyahu proclaimed, "It's time to move the peace process forward."

The most sympathetic interpretation of Netanyahu's proclamation is that he was engaging in political theater. It was a low and dishonest statement uttered at the end of what has been, in the immortal words of W.H. Auden, "a low and dishonest decade."

For its part, Fatah is not in a position to make peace even if its leaders wished to. Mahmoud Abbas and his deputies know that just as Hamas won the 2006 elections in Judea, Samaria and Gaza, Hamas would win elections today. To maintain even a smudge of domestic legitimacy, Fatah's leaders have no choice but to adopt Hamas's rejection of peaceful coexistence with the Jewish state.

Clearly, now is not the time "to move the peace process forward."

In 1999, Netanyahu was ejected from office by an electorate convinced that he was squandering an historic opportunity for peace between Israel and its neighbors. A majority of Israelis believed that Netanyahu's signature policies of demanding that the Palestinians abide by their commitments to Israel, and maintaining the IDF's security zone in south Lebanon were dooming all hope for peace.

His successor, Ehud Barak, promised to remove IDF troops from Lebanon and forge a final peace with the Palestinians and with Syria within a year. After winning the election, Barak famously promised a swooning crowd at Rabin Square that the "dawn of a new day has arrived."

Barak lost no time fulfilling his campaign promises. He withdrew the IDF from south Lebanon in May 2000.

He launched talks with Syria in December 1999. For four months he begged Syrian dictator Hafez Assad to accept the Golan Heights, stopping only after Assad harshly rebuffed him in March 2000.

And in July 2000 at Camp David, Barak offered Yasser Arafat Gaza, 90 percent of Judea and Samaria and half of Jerusalem in exchange for peace. After Arafat rejected his offer, Barak sweetened it at Taba in September 2000, adding another 5% of Judea and Samaria, the Temple Mount, and extra lands in the Negev, only to be rejected, again.

Barak made these offers as the wisdom of appeasement exploded before his eyes. Hizbullah seized the withdrawal from Lebanon as a strategic victory. Far from disappearing as Barak and his deputy Yossi Beilin had promised it would, Hizbullah took over south Lebanon and used the area as a springboard for its eventual takeover of the Lebanese government. So, too, with its forces perched on the border, Hizbullah built up its Iranian-commanded forces, preparing for the next round of war.

Similarly, Barak's desperate entreaties to Assad enhanced the dictator's standing in the Arab world, to the detriment of Egypt and Jordan.

To the extent he required encouragement, the ascendance of Hizbullah, Syria and Iran made it politically advantageous for Arafat to reject peace. Buoyed by their rise, Arafat diverted billions of dollars in Western aid from development projects to the swelling ranks of his terror armies. Instead of preparing his people for peace, he trained them for war.

Arafat responded to Barak's beggary at Camp David and Taba by launching the largest terror offensive Israel experienced since the 1950s. The Palestinians' orgiastic celebration of the mass murder of Israelis was the final nail in Barak's premiership, and it seemed at the time, the death-knell of his policies of appeasement.

A year and a half after he took office, the public threw Barak from power. Likud leader Ariel Sharon - who just a decade earlier had been taken for dead - was swept into power with an electoral landslide. To the extent the public vote was for Sharon, rather than against Barak, the expectation was that Sharon would end Barak's appeasement policies and defeat Arafat and the terror state he had built in Gaza, Judea and Samaria.

But this was not to be.

Rather than abandon Barak's policies, Sharon embraced them. He formed a unity government with Labor and refused to fight. He didn't fight after 22 teenagers were massacred outside the Dolphinarium nightclub in June 2001. He did not fight after the September 11, 2001, attacks and the Palestinian celebrations of the slaughter in New York and Washington.

Sharon did not order the IDF to fight until the carnage of March 2002 that culminated in the Seder massacre at Netanya's Park Hotel forced his hand. Had he not ordered the IDF to dismantle the Palestinian terror infrastructures in Judea and Samaria at that time, he faced the sure prospect of being routed in the Likud leadership race scheduled for November of that year.

Operation Defensive Shield was a textbook example of what you get when you mix weak politicians with a strong society. On the one hand, during Defensive Shield, the IDF took control of all the major towns and cities in Judea and Samaria and so enabled Israel to dismantle Palestinian terror networks by remaining in place in the years that followed.

On the other hand, Sharon refused to allow the IDF to launch a parallel operation in Gaza, despite repeated entreaties by the army and residents of the South. Most important, Sharon barred the IDF from toppling the PA or even acknowledging that it was an enemy government. And he maintained that the Palestinian jihad began and ended with Arafat, thus absolving all of Arafat's deputies - who were then and today remain deeply involved in the terror machine - of all responsibility.

In acting as he did, Sharon's signaled that he was not abandoning appeasement. Indeed, he made clear that his aim was to re-embrace appeasement as his national strategy as soon as it was politically feasible.

Most Israelis explained away Sharon's behavior in his first term as the price he was forced to pay for his coalition government with Labor. So when in 2003 Sharon, Likud and the political Right won an overwhelming mandate from the public to lead the country without the Left, the expectation was that he would finally let loose. He would finally fight for victory.

Instead, Sharon spat on his party, his coalition partners and his voters and adopted as his own the policies of the Left that he had condemned in his campaign.

To implement those policies, Sharon dismantled his government and his party and formed a coalition with the same Left the nation had just overwhelmingly rejected.

The past decade's major policies: the withdrawal from Gaza, the construction of the security fence, the acceptance of the road map peace plan, the Annapolis Conference, Operation Defensive Shield, the Second Lebanon War and Operation Cast Lead all shared one central feature. They were all predicated on ignoring the lessons of the failure of appeasement in 2000.

Whereas Defensive Shield's strategic success was owed to Israel's decision to maintain control over the territory the IDF seized in the fighting, in launching the wars with Hizbullah and Hamas, Sharon's successor, Ehud Olmert, ignored that success and chose instead to emulate the operation's failures.

To further his government's appeasement policies, Olmert refused to order the IDF to seize south Lebanon or Gaza. By the same token, like Sharon in Defensive Shield, Olmert announced at the outset that he had no interest in defeating Israel's enemies. He limited the goals of the campaigns to "teaching them a lesson." And of course by not seeking victory for Israel, Olmert enabled both Hizbullah and Hamas to claim victory for themselves.

By opting not to defeat Hizbullah or Hamas, Olmert communicated the message that like Sharon before him, his ultimate strategic aim was to maintain the political viability of appeasement as a national strategy. He was fighting to protect appeasement, not Israel.

As we move into the second decade of this century, we need to understand how the last decade was so squandered. How is it possible that in 2010 Israel continues to embrace policies that have failed it - violently and continuously for so many years? Why, in 2010 are we still ignoring the lessons of 2000 and all that we have learned since then?

There are two main causes for this failure: The local media and Sharon. Throughout the 1990s, the Israeli media - print, radio and television - were the chief propagandists for appeasement. When appeasement failed in 2000, Israel's media elites circled the wagons. They refused to admit they had been wrong.

Misleading phrases like "cycle of violence" were introduced into our newspeak. The absence of a security fence - rather than the presence of an enemy society on the outskirts of Israel's population centers - was blamed for the terror that claimed the lives of over a thousand Israelis. Palestinian propagandists and terrorists such as Fatah leader Marwan Barghouti were treated like legitimate politicians. Palestinian ties to Iran, Syria, Iraq and the nexus of global jihad went unmentioned or uncommented upon.

At the same time, opponents of appeasement - those who had warned of the dangers of the Oslo process and had spoken out against the withdrawal from Lebanon and a potential withdrawal from the Golan Heights and Gaza - were not congratulated for their wisdom. They remained marginalized and demonized.

This situation prevails still today. The same media that brought us these catastrophes now derides Likud ministers and Knesset members who speak out against delusion-based policies, while suddenly embracing Netanyahu who - with Barak at his side - has belatedly embraced their pipe dreams of appeasement-based peace.

Then there is Sharon. The man who built the settlements, who removed the PLO from Lebanon, who opposed Oslo, Camp David and the withdrawal from Lebanon; the man who opposed the security fence and pledged to remain forever in Gush Katif. As Israel's leader for most of the past decade, more than anyone else Sharon is responsible for Israel's continued adherence to the dishonest, discredited and dishonorable dictates of appeasement.

Whether due to his alleged corruption, his physical enfeeblement, his fear of the State Department, or his long-held and ardent desire to be accepted by the Left, Sharon betrayed his voters and his party and he undermined Israel's ability to move beyond failure.

Auden's "low and dishonest decade" was the 1930s. It was the West's obsession then with appeasement that set the world on course for the cataclysm of World War II.

As Israel enters the new decade, we must redouble our efforts to forestall a repeat of the cataclysm of the 1940s. Disturbingly, Netanyahu's call for a fraudulent peace process shows that we are off to an ignoble, untruthful start.